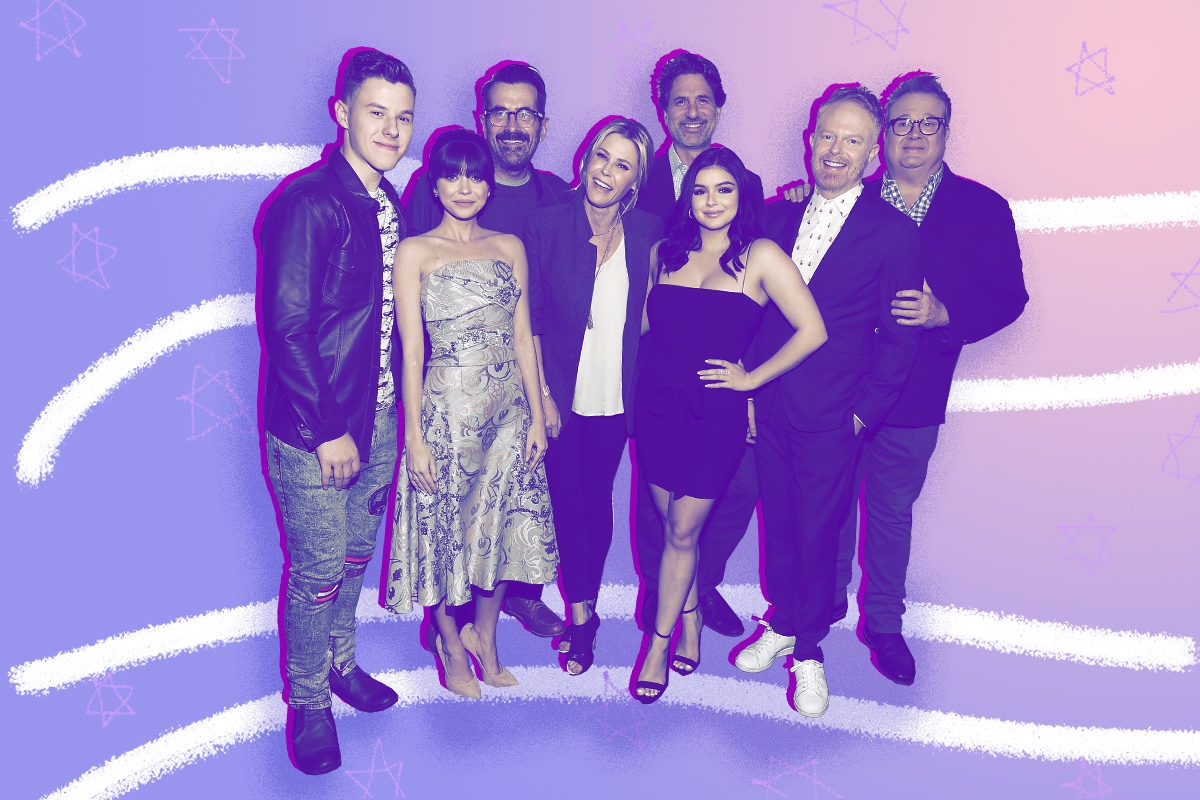 After more than a decade of laugh-out-loud episodes filled with silliness, antics, and definitely some drama, ABC’s Modern Family is ending its 11-season run in April.

None of the main characters in Modern Family are Jewish, but that doesn’t mean the show isn’t: Created by Steven Levitan (and his non-Jewish co-creator Christopher Lloyd), the Jewish dad drew many storylines from his real-life interactions with his children.

In honor of the sitcom’s final episode, set to air on April 8 — yes, Passover! — we rounded up all the Jewish bits about Modern Family you should know.

1. As we know, co-creator Steven Levitan is Jewish. Raised in a Jewish household in Chicago, the dad shares three children — Hannah, Alex, and Griffin — with his Catholic wife, Krista.

2. In the writing room, writers are supposed to write what they know! And that’s exactly what Levitan did. In fact, he drew from his personal life so frequently that his kids — who shaped the characters Haley, Alex, and Luke — had to watch what they said around their dad.

“My kids know that I use what happens at home and are very wary about mentioning anyone at school,” Levitan told the Jewish News. “‘Don’t you dare’ they’ll say, if they see me listening.”

3. Want proof? Here’s two examples of when the Levitan family served as a Modern Family plotline:

In an episode where Claire Dunphy smashes her husband Phil’s expensive TV remote, “Well, that is what my wife Krista did to mine,” Levitan said.

Remember the episode when the eldest Dunphy, Haley, goes to college? The drop off’s emotional goodbye was ruined by arguments, but when Phil and Claire got home they were verklempt to find Haley on Skype wearing the T-shirt her dad gave her. It’s a true story, and apparently Levitan cried when he saw the scene play out on air.

4. Although Modern Family isn’t inherently Jewish, as we’ve very well established, Levitan said his “cultural sensibilities at times trickle down to the writing.” Aside from that, a third of the writer’s room was Jewish! Go figure.

5. The composer for Modern Family‘s theme song, Gabriel Mann, is Jewish. A member of the band The Rescues, Mann’s father was a cantor, and he told the Jewish Journal he spent his “bar-mitzvah winnings” on a Casio CZ-500 synthesizer. Whatever that means.

6. Jesse Tyler Ferguson, the actor who portrays Mitchell Pritchett, isn’t Jewish. But, he so wishes he was!

So happy Yom Kippur everyone! I wish I was jewish.

8. Jewish dad Matthew Broderick made an adorable cameo when he played the character of Dave, Phil’s new gym buddy. The plot revolves around mixed signals — Dave tries to woo Phil until he learns that Phil is not only heterosexual, he has a wife and three kids. Sad!

9. The most prominent Jewish character on Modern Family is Sherman “Pepper” Saltzman, played by none other than Nathan Lane. In the show, Pepper is the flamboyant, over-the-top dear friend and ex-lover of Cameron, Mitchel’s husband. Throughout the seasons we learn that Pepper’s father was Chaim Saltzman, but went by Chad Treadwill at the golf club, and he threw an extravagant Passover party called “Seder-Day Night Fever.”

10. Noulan Gould, who portrays Luke Dunphy, is a Jewish genius — seriously, he’s a member of Mensa, the “high IQ society.”

Gould, 21, is pretty sad that the show he grew up on is coming to an end: “I love this show, and honestly could do it for the rest of my life.” Is there a spin-off series in the making? Time will tell.

11. At last, we’ve arrived at the Jewish references portion of the article. In the Season 7 premiere, Phil wears a v-neck t-shirt that reads “oy vey,” except the deep cut in the shirt replaces an actual “v.”

“Honey, can you at least take that t-shirt off?” Phil’s wife asks of him. With bagels in hand (classic!) he replied, “They loved it at the deli. They were kvelling!”

“Then you must appreciate a good value!” Manny replied.

13. Bar mitzvah party hopping makes an appearance in Season 4: While at a hotel, Luke and his cousin Manny crash three coming-of-age parties in one evening, in search of a crush.