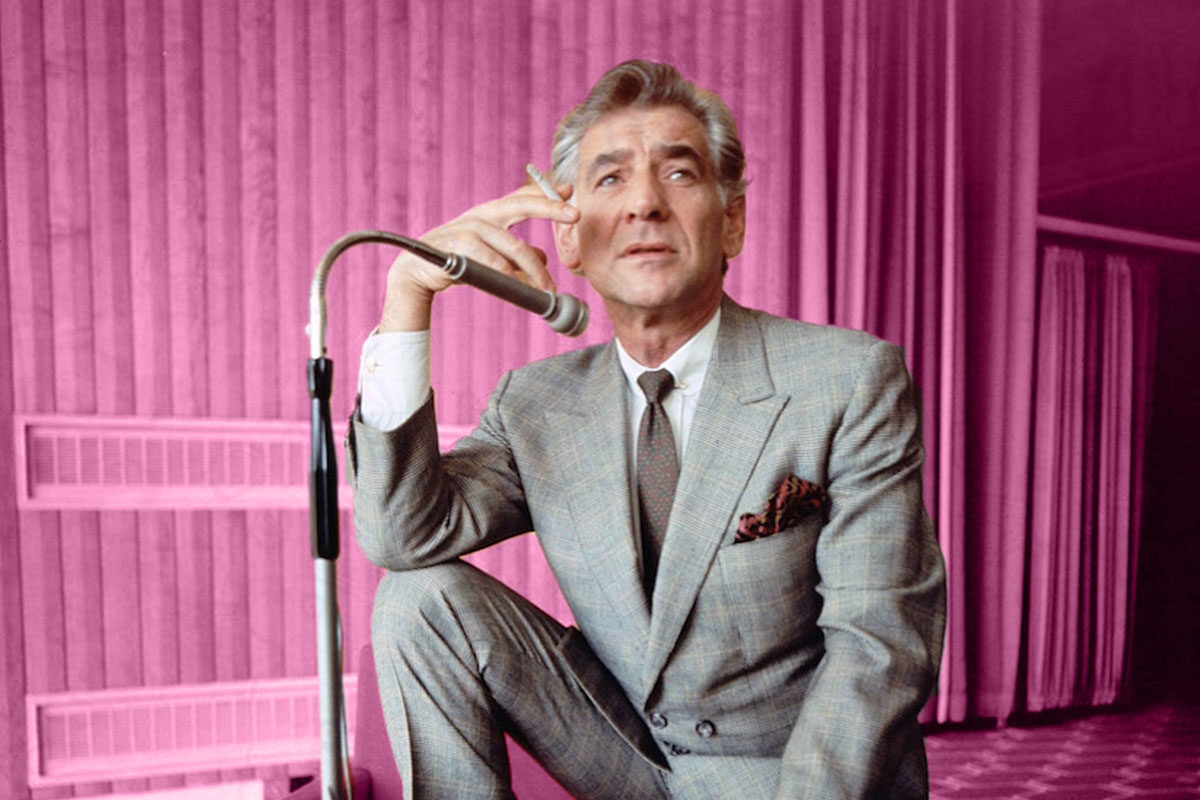 When the news first broke last month that Bradley Cooper will direct and star in a Leonard Bernstein biopic, the internet exploded in excitement and confusion.

Sure, Cooper gave us a lovely rendition of a musician — albeit a drunk has-been —  in A Star Is Born. And, as it turns out, Bernstein, as a younger man, had quite a bit in common with Cooper: Both are (were?) incredibly hunky!

Still, one has to wonder if Cooper — who was raised Catholic — can bring the appropriate amount of, well, Yiddishkeit to the role. After all, the late Bernstein (who died in 1990 at age 72) was many things; a proud Jewish man among them.

In 1943, when Bernstein was just 25, he became an overnight success when, at the last minute, he filled in for Bruno Walter and conducted the New York Philharmonic at Carnegie Hall. The 11th-hour swap led the New York Times to publish a front-page article about the “dramatic musical event,” laying the foundation for Bernstein’s legacy as one of the first Americans to lead a world-class orchestra.

During his lifetime, Bernstein — “Lenny” to friends and family — had an outsize impact on American culture, thanks to his genius hits like West Side Story and Candide. A versatile artist, the Jewish composer wrote scores for everything from opera and ballet to orchestral music and piano.

Described by Pulitzer Prize-winning music critic Donal Henahan as “one of the most prodigiously talented and successful musicians in American history,” Bernstein is forever remembered as not only one of the most prolific composers, but a legendary Jewish artist.

Cooper’s Bernstein movie sounds incredibly promising: Among the Netflix drama’s co-producers are Steven Spielberg and Martin Scorcese, and Bernstein’s children are advising on the project. Still, the movie will focus on a 30-year period of his marriage, and won’t paint the full picture of the icon’s life.

So, here are some incredible Jewish facts about one of the greats.

1. Louis “Leonard” or “Lenny” Bernstein was born in 1918 to Jewish-Russian immigrant parents. Raised in Massachusetts, Bernstein’s father, Samuel Joseph Bernstein, was a successful hairdressing supplies wholesaler; his mother, Jenny, raised him and his younger siblings, Shirley and Burton, in a Conservative Jewish home.

2. Bernstein was supposed to be a rabbi! After his father, Sam, abandoned his dream of a rabbinical career to join the military, Sam hoped that his eldest son would pick up the mantle. Much to his father’s chagrin, Bernstein’s aunt Clara seeded young Leonard’s musical career when she donated a piano to the family. Although Sam wrote to his son’s piano teacher that Bernstein shouldn’t “regard music as a future means of maintenance,” the iconic composer’s family eventually came on board and supported his work.

3. Boston’s first Conservative synagogue inspired Bernstein musically. In 1964, he sent a letter sent to the Cantors Assembly of America praising Solomon Gregoy Braslavsky, the musical director at the congregation: “Before I ever heard a concert, recital, or opera, before I had ever touched a piano, or knew that an organized musical life existed — before all these, I heard the music that Professor Braslavsky caused to be made at Temple Mishkan Tefila. I shall never forget that music, nor cease to be grateful for the power, conviction and atmosphere with which it was conveyed.”

4. Bernstein had three children — Jamie, 67, Alexander 64, and Nina, 57 — with his wife Felicia Cohn Montealegre. Although her grandfather was Jewish, the Chilean actress converted to Judaism before marrying Bernstein in 1951.

5. Though he loved his wife deeply, Bernstein had extra marital affairs with men. In a letter from Felicia to her husband, she acknowledges his homosexuality: “You are homosexual and may never change — you don’t admit to the possibility of a double life, but if your peace of mind, your health, your whole nervous system depend on a certain sexual pattern what can you do?”

6. Bernstein might not have admitted it, but he certainly led a double life. Aside from affairs with men, he was away as he was focused on touring. But when he was home, he was present. In her book, Famous Father Girl: A Memoir of Growing Up Bernstein, Bernstein’s eldest daughter recounts how she and her siblings were mesmerized by their genius dad who exposed them to poetry, music, and Hebrew lessons.

7. A year before his iconic  New York Philharmonic debut, Bernstein completed his very first — and very Jewish — symphony, Jeremiah. Instead of using traditional Italian titles for movements, Bernstein organized the piece according to stages of the Jewish prophet’s life: Prophecy, Profanation, and Lamentation. The symphony was voted by the New York Music Critics’ Circle as the best new American orchestral work, thus launching his career.

8. During the Holocaust, Bernstein’s mentor, Jewish composer Serge Koussevitzky, tried to persuade him to change his name to Leonard S. Burns to avoid anti-Semitism. In a 1979 interview, Bernstein said he “lost a nights’ sleep over it and came back and told him “‘I had decided to make it as Leonard Bernstein or not at all.’”

9. A civil rights activist, Bernstein elevated minority voices throughout his career. In his Broadway debut of On the Town in 1944, he changed American history by casting African-American actors in high-profile roles. Joe Bastic, a critic for The People’s Voice, described the momentous casting as “the biggest, most important thing that has happened to Negroes in the American theatre.”

10. After he premiered Jeremiah, Park Avenue Synagogue commissioned Bernstein to compose liturgy for a Shabbat service. In 1945, the Jewish musician wrote Hashkivenu for the congregation’s cantor. It would be his only original work for a synagogue.

11. Tel Aviv welcomed Bernstein to Israel in 1945 for the first time, and he was smitten.  In a nine-page letter to his mother he wrote while touring the country during its War of Independence, the musician said, “It’s a marvelous town… I had a glorious Arab meal with Khumus and T’hina,” according to The Times of Israel.

12. In a letter Bernstein wrote to Koussevitzky, his mentor, he said the best thing about performing in Israel were the “special concerts for soldiers. Never could you imagine so intelligent and cultured and music-loving an army!” A month later, in November 1948, an armed bus carried Bernstein and the 35 members of the Israel Philharmonic to perform for troops in Beersheba who remained camped out in the town despite the UN’s order to withdraw its troops.

13. Bernstein’s connection with Israel lasted throughout his life, and he conducted the Israel Philharmonic over 25 different seasons. According to Erica K. Argyropoulos, an expert on Bernstein’s religious roots, “His deep commitment to Israel was a profound means by which he nourished this intimate part of himself,” the Times of Israel reports.

14. Bernstein’s West Side Story was originally about Jews and Catholics! The Library of Congress holds an annotated copy of Romeo and Juliet — the story the musical is based on — with notes from Bernstein and choreographer Jerome Robbins that indicate the musical was intended to be written as “East Side Story.”

15. Bernstein returned to Jewish motifs in 1963 with his third symphony, Kaddish. Dedicated to President John F. Kennedy, My Jewish Learning writes that the composer “envisioned an era in which humankind was distanced from God on the verge of self-destruction.” And while the music itself isn’t “Jewish,” per se, the text is driven by Jewish history and philosophy.

16. Bernstein is likely to be the first person to perform Hebrew lyrics at the Vatican. In 1965, the Chichester Cathedral commissioned the musician to compose Chichester Psalms for a festival, which he later performed at the Vatican in 1973 for Pope Paul VI’s 10th-anniversary of papacy. Written and sung in Hebrew — and paired with Church music — it’s thought that this juxtaposition was an implicit call by Bernstein for peace in Israel.

17. We owe a big thanks to Bernstein for giving us Father of the Bride and Buffy the Vampire Slayer. At the end of the Six-Day War, Bernstein conducted a concert at the newly reconquered Mount Scopus. There, Bernstein visited medical volunteers, and bumped into Zvi Howard Rosenman, an American producer who had been the composer’s waiter at a discotheque in New York. “Oh my God, you look just like this guy that I know!” Bernstein said. “Maestro, I was your waiter,” Rosenman replied. At the time, Rosenman was in his second year of medical school, but with Bernstein’s support and encouragement, Rosenman became a famous movie producer.

18. In 1974 Bernstein played tribute to his Jewish heritage with Dybbuk, a ballet suite based on Saul Ansky’s Yiddish play. In Jewish lore, a dybbuk is a wandering soul which can enter a living body.