Take Your Antidepressants. It's a Mitzvah. – Kveller
Skip to Content Skip to Footer

Take Your Antidepressants. It’s a Mitzvah. 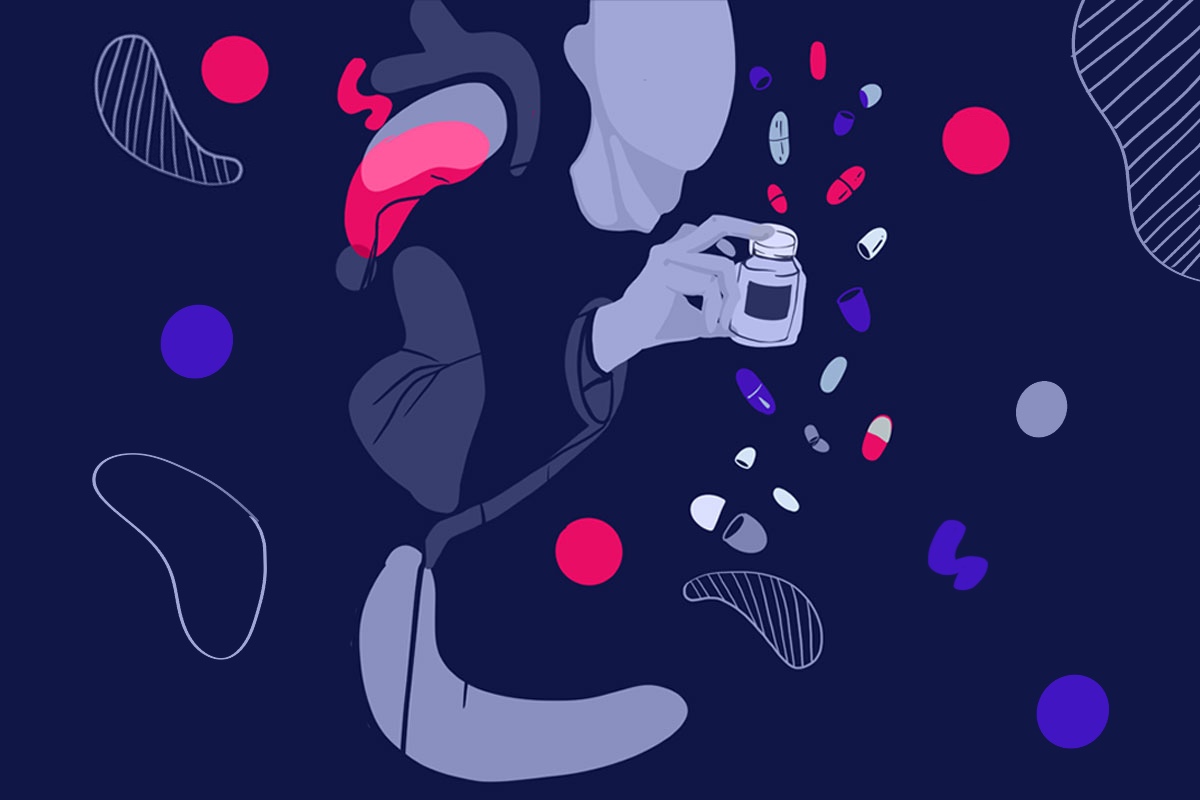 I feel like I’m waking up after over a year of being a groggy golem: functional, but without much motivation or desire of my own. I realized recently that I don’t take many pictures of myself anymore and I think I’ve been unconsciously avoiding mirrors; it’s like I’ve been sitting shiva for the pre-pandemic version of myself that’s no longer recognizable.

These past two years of the pandemic have been some of the hardest of my life, as they have been for many of us. I already had Generalized Anxiety Disorder and a touch of chronic depression (that developed sometime around my tweens). When my anxiety became really pronounced pre-pandemic, I finally broke down and found a therapist. Therapy is phenomenal and has helped me so much — but for many of us, therapy isn’t enough on its own.

So in addition to regular therapy sessions, my then-psychiatrist put me on anti-anxiety medication that treats both anxiety and depression. It worked really well for me, along with the behavioral tools I learned from therapy and personal growth work on my own. In fact, things got so much better that I started to taper down my dosage (under my psychiatrist’s supervision).

Then the pandemic hit. I had to up my dosage back to where it had been when my anxiety had been really acute, before I’d ever started therapy. I think it helped a little bit, for a little while. But as the pandemic continued on, now with no end in sight, it wasn’t enough.

I kept going to therapy, weekly sessions now for the past two years. Therapy always helps, but even that wasn’t enough. I vaguely slipped away, becoming some weird version of myself that was more facade than function. I’ve been here, surviving, taking care of my kid, going to work — but I’ve not really been fully present. It’s like some important part of me, the vital and most me-est part, had been shut off.

But thanks to modern medicine, I’m coming back to myself again.

While there’s plenty I question in Judaism (and hey, we’re encouraged to!), something I love is the Jewish perspective regarding physical health. From the Torah telling us people are b’tzelem Elohim (“created in the image of God”), to Hillel referring to the act of bathing himself as a mitzvah, to the idea that eating on Yom Kippur is a righteous act if fasting would negatively impact your health, Judaism holds human health and wellbeing in high esteem. There are specific mitzvahs related to health as well, including shmirat haguf (guarding the body) and pikuach nefesh (preserving life). (Fun fact: the mitzvah of pikuach nefesh actually takes precedence over every other mitzvah!)

I am not saying that doctors should prescribe medication willy nilly, that medication is the magic cure to fix everything on its own, or that this isn’t a more complicated issue for those who struggle with addiction. But some of us need medication to function, just like some people have thyroid disease and need thyroid medication or have diabetes and need insulin. I want us to be able to talk about it without judgment. Once we can do that, more people will be open to the idea of taking meds if they need them, without fear or shame. And then more people will have access to this mitzvah.

In my mental health mitzvah practice, I ended up switching practices to a better psychiatrist recently. I had given up on finding that missing piece of me, but rather wanted to talk to him about my concerning lack of focus and attention these days. I started to worry that maybe it’s more than general “pandemic brain,” and wondered if I might have undiagnosed adult ADHD, like some family members of mine are beginning to discover of themselves. From our discussion, he prescribed me an antidepressant to take along with my anti-anxiety meds.

The results have been incredible. I physically and emotionally haven’t noticed any huge, flashy changes (which is good — medication is not supposed to change who you are in any way), but I feel like myself again, like I can manage things again, and like things actually matter, including a lot of my old passions and joys that had fallen to the wayside and been gathering dust. It’s like coming home from a long journey — I missed myself terribly, and didn’t even realize it until now. To continue with the golem analogy, it’s like I went from being a lifeless lump of clay shaped like me, to having the breath of life breathed into my nostrils. And it’s all because I prioritized myself enough to get on the right medication.

I’ll leave you with what I told my 8-year-old son when the topic came up: My son’s first reaction to hearing about medication for mental health issues was that it’s cheating, that it gives you an unfair advantage. (I empathize with this perspective, since it’s what kept me from taking meds for so many, many years.)

I told him to imagine that all the people in the world are smartphones: Most people have a full charge, and this represents the balance and availability of chemicals in their brain — they have an average amount of everything, more or less. But some of us “phones” have a lower charge, without a full battery — we might even only have half, or less. We aren’t less-than because of this; we are all just born with different brains and different bodies, which means that different people have different needs, which is natural and normal. It also doesn’t mean we are “crazy” (or any of the other harmful words we sling around) — it means we have more of an obstacle waking up and going through each day than the average “full charge” person who takes it for granted, because we started out feeling more drained.

The medication doesn’t give us superpowers; it brings our battery charge up to the same level as everyone else so we have the opportunity to start from a more equal place. Everyone deserves to feel fully charged, fulfill their needs and do the things that are important to them. Sometimes, medication (supervised by a health professional and along with therapy) is the missing puzzle piece that allows that to happen.

Whatever our bodies need — whether it’s medication or not — I hope we won’t let any form of stigma and shame influence how we carry out the mitzvah of caring for our physical and mental health. I also hope that we, as Jews, will more actively take on the responsibility of breaking down stigma and barriers around medication and mental health, which is in itself a mitzvah, too.