We Spoke With Tiffany Haddish's Rabbi! – Kveller
Skip to Content Skip to Footer

We Spoke With Tiffany Haddish’s Rabbi! 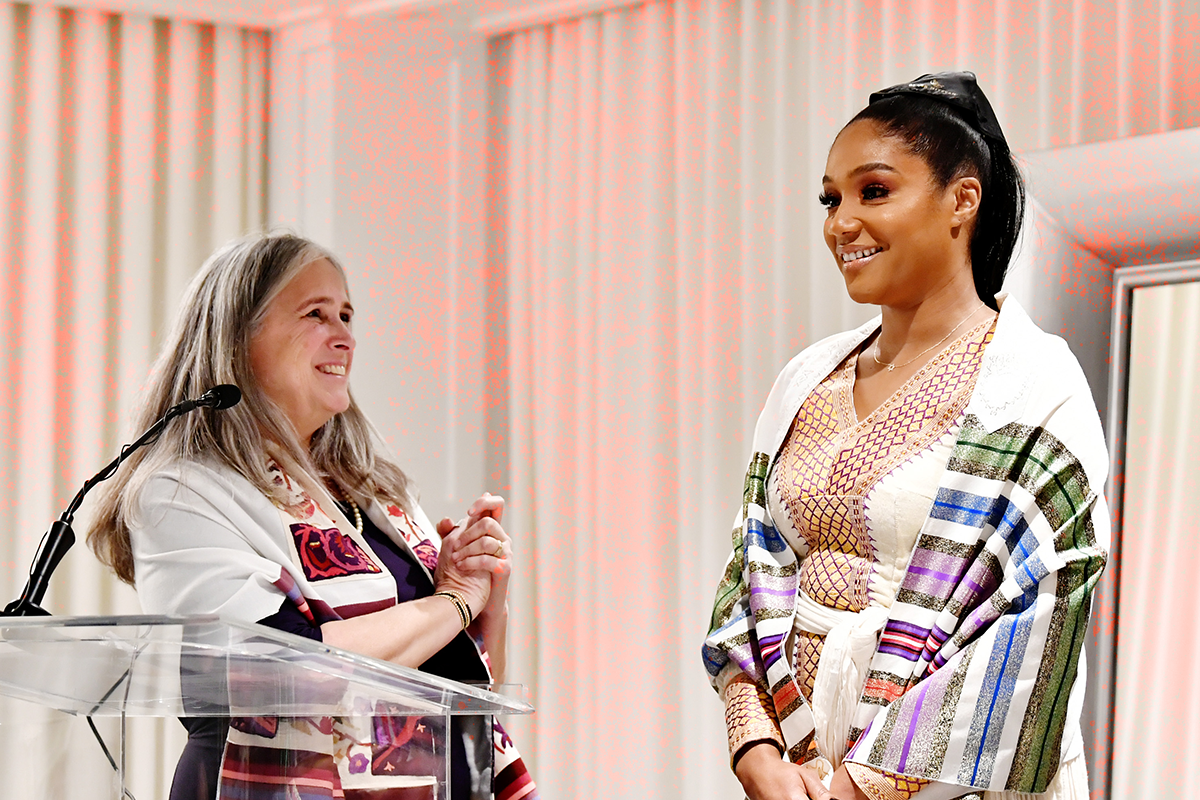 Rabbi Susan Silverman is at the airport in Los Angeles, the din of people waiting for their flights echoing behind her. She has been through a whirlwind, officiating one of highest-profile simchas ever: Tiffany Haddish’s bat mitzvah, a glamorous, red-carpet event that coincided with her 40th’s birthday on Tuesday night.

But when I speak to Silverman, she does not sound exhausted in the slightest — she is brimming with warmth and delight.

I’ve observed that same warmth from her before; in this adorable video in which the rabbi is speaking with her famous sister, actress/comedian Sarah Silverman. The pair are lying in bed, talking about Susan’s work — her mightily important work, both as a board member of Women of the Wall — which advocates for women’s rights to pray at the Kotel, or Western Wall — and with her organization, Second Nurture, which helps encourage foster care and adoption in the Jewish community (Silverman herself adopted two kids from Ethiopia.)

She exudes the same excitement when she talks about her latest student, Haddish. “Tiffany — you can see it. She is this vessel of love and joy and depth,” Silverman says. “I have never worked with someone who is so moved by the process.”

You may be wondering how Silverman, a mother of five, ended up leading a bat mitzvah for the hilarious Jewish celebrity. Sure, her sister is the obvious connection, as Haddish is a huge fan of the Disney Jewish princess. But the thing that brought the two together is their mutual passion fighting for kids in foster care.

For Silverman, issues of adoption and foster care are deeply connected to issues that many Jews are passionate about: prison reform, homelessness, anti-trafficking. In many cases, the foster care system is is the feeder to these problems. According to Foster On, 20 percent of kids who age out of foster care end up homeless —  something Haddish, too, experienced firsthand.

Silverman and her organization partners with synagogues to help them to promote foster care and adoption. Second Nurture gives people who want to foster and adopt a sense of support and community — including donating work space to foster parents who lose their home offices when they’re converted into bedrooms — and Haddish is on the board.

“I see in Tiffany this deep belonging that you feel as part of the Jewish people,” Silverman says. “What I see in kids in foster care is this deep and painful desire to belong. That kids who don’t belong in a family don’t belong in a place of love and a place where people have your back.”

Haddish and Silverman both came to Judaism later in life. Silverman, who grew up in an extremely secular Jewish family in New Hampshire, was won over by Judaism through her husband, Yosef Abramowitz, who she met while fighting apartheid at Boston University.

As for Haddish, the daughter of an Eritrean Jew, she told our sister site Alma: “I didn’t know anything about Judaism for a long time. As I got into that profession as an energy producer [at bar and bat mitzvahs,] I started learning more and more about the Torah. I could really relate to it. And when I met my father, it really resonated with me. I was like: This is what I am.“

While preparing for the bat mitzvah, Silverman and Haddish bonded over their later-in-life connection to the religion. “She was learning how to read Hebrew, she was learning it all… and I said to her, you know more now than I knew on my first day of rabbinical school.”

According to Silverman, it was clear that, for Haddish, this was a deeply spiritual endeavor that wasn’t just about the party. “I can’t speak for her, but my feeling was that was what drove this whole thing. It wasn’t like, ‘I’m gonna do a bat mitzvah and then I’m going to see if I’m into it.’  It was really driven by the desire to learn and to mark her place to stand, so to speak, among the Jewish people.”

She adds: “I would say really the highlight was seeing her — she would start to cry by just being moved and grateful.”

Haddish was an extraordinary student, Silverman says. “She immediately would take stories and she would be able to place herself in them. She was just like the wise child in the Passover seder. She was just in it.”

For Silverman, the bat mitzvah delightful side effect for her own family. Haddish was working on a movie in New York while she was studying for her bat mitzvah; Silverman, meanwhile, lives in Israel and works in LA. (And you thought your commute was rough!) Teaching the actress Hebrew through Skype would be a challenging endeavor, but then she realized she had the perfect solution: Aliza Rose, her 20-something daughter, who lives in New York. “Aliza speaks Hebrew, Aliza can read torah, so I just connected them.”

Rose tutored Haddish, and the pairing led to an unexpected outcome: “Aliza was inspired Jewishly by Tiffany’s passion and engagement,” she says. “What Aliza has taken for granted all her life, she was just looking at with these new and enraptured eyes.”

Along with Haddish, Silverman and Rose shared the bimah that special day with another famous and inspiring Jewish human: Billy Crystal.

“They’re friends, they just made a movie together,” Silverman explains. “They were both very connected.” (Haddish co-stars with Crystal in a movie, Here Today, which he also directed and produced.)

I asked how she handled his considerable star power on the stage. “He’s amazing, I’m a huge fan, but you know, I’m so in rabbi mindset, so I’m like, ‘Oh, this is Billy Crystal,’ but I’m calling him by his Hebrew name and focusing on what’s next.”

As Silverman concludes: “It was beautiful, there was a lot of love in that room.”