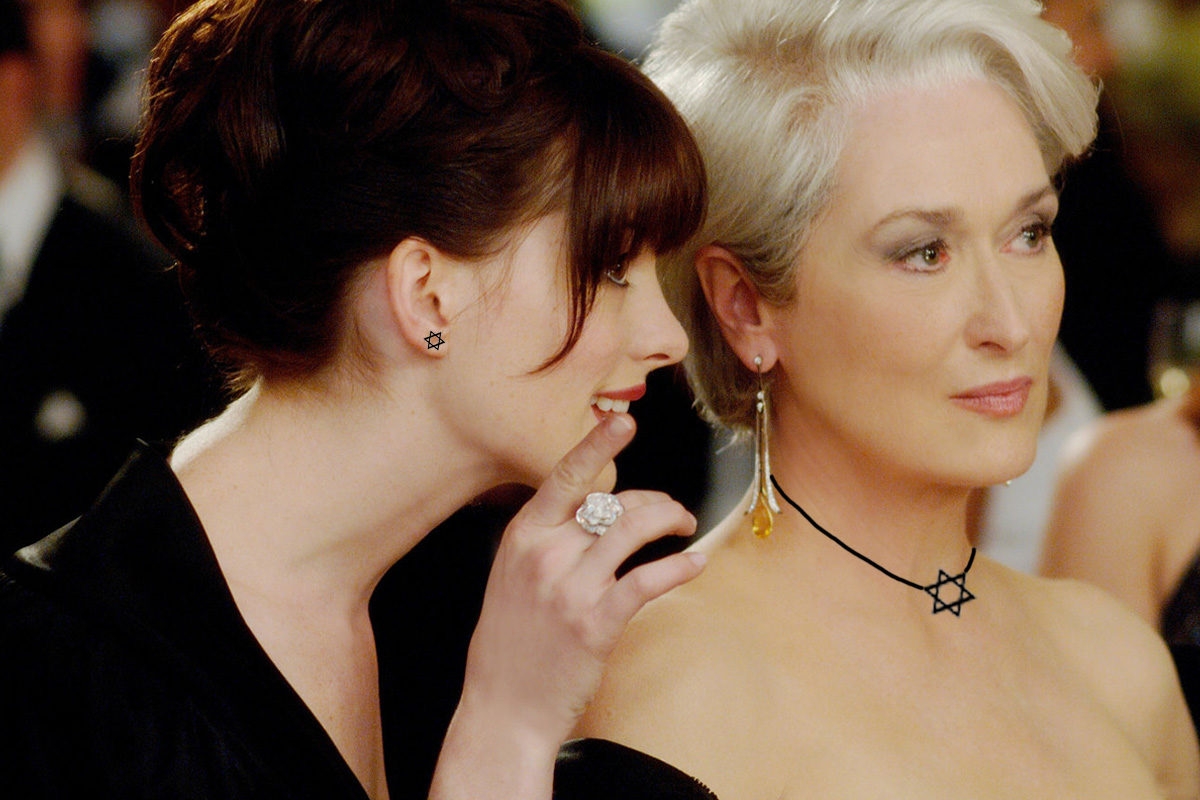 If you don’t remember where you were when you first saw The Devil Wears Prada, then it’s time to rewatch the iconic film. Lucky for you, Hulu just brought the high-fashion drama to its streaming service, so now you can watch it to your heart’s delight.

What’s a movie starring Meryl Streep, Emily Blunt, and Anne Hathaway have to do with Jews? Quite a bit, actually. Based on Jewish writer Lauren Weisberger’s 2003 novel of the same name, The Devil Wears Prada has some Jewish context.

But the devil’s in the details, as they say, so let’s delve in, shall we?

1. Weisberger’s bestselling novel was based on her time as a personal assistant for American Vogue editor Anna Wintour. In the movie, the protagonist, Andrea Sachs (based on Weisberger), is played by Anne Hathaway. Though not a Jew herself, Hathaway and her Jewish husband, actor Adam Shulman, have a 2-year-old named Jonathan Rosebanks Shulman.

2. The Devil Wears Prada is actually full of Jews! (OK, not much of a surprise here; this is Hollywood, after all.) The director David Frankel is Jewish.

4. In the novel, Weisberger’s character, Andrea, identifies as Jewish, as does Miranda Priestly, the editor-in-chief of Runway magazine. The icy EIC was born Miriam Princheck to an Orthodox Jewish family of 11 children, who rises from “Jewish peasant to secular socialite.” In the movie, however, neither Andrea or Miranda are portrayed as explicitly Jewish. When asked about the importance of including Jewish characters and themes in her work, Weisberger told Ynet News: “When you’re looking to create new characters or flesh them out with more detail, you naturally turn to what’s around you, and in my case, I see a whole lot of Jewish friends and family.”

6. Weisberger made a cameo in the movie, as the nanny for Miranda Priestley’s twin daughters. She’s seen for a split second on a train with the kids who are immersed in a Harry Potter book.

7. Interestingly enough, there’s a Jewish backstory to the Harry Potter books Miranda’s daughters read on the train. In the movie, Miranda demands that Andrea procure advanced copies of the upcoming Harry Potter book for her daughters. In real life, those fake manuscripts were auctioned and sold for $586. The proceeds were given to Dress for Success, a philanthropic organization founded by Jewish entrepreneur Nancy Lublin. Yay, tzedakah!

8. The woman who inspired the book — Wintour — was first hired at Vogue by Jewish publisher Samuel Irving “S.I.” Newhouse, Jr.

9. Jewish mom Aline Brosh McKenna wrote the screenplay. While traveling for the film, she had to miss her son Leo’s first day of preschool. “I was devastated,” McKenna told Working Mother. “But sometimes there’s no choice.” These days, McKenna may be best known for co-creating the very Jew-y Crazy Ex-Girlfriend with Rachel Bloom.

10. At the end of the movie, Andrea leaves fashion behind and goes to work at a scrappy, “real” New York newspaper. The scene was filmed at the offices of the New York Sun, a conservative daily newspaper published from 2002 to 2008, founded by Jewish editor Seth Lipsky, the former editor of The Forward.