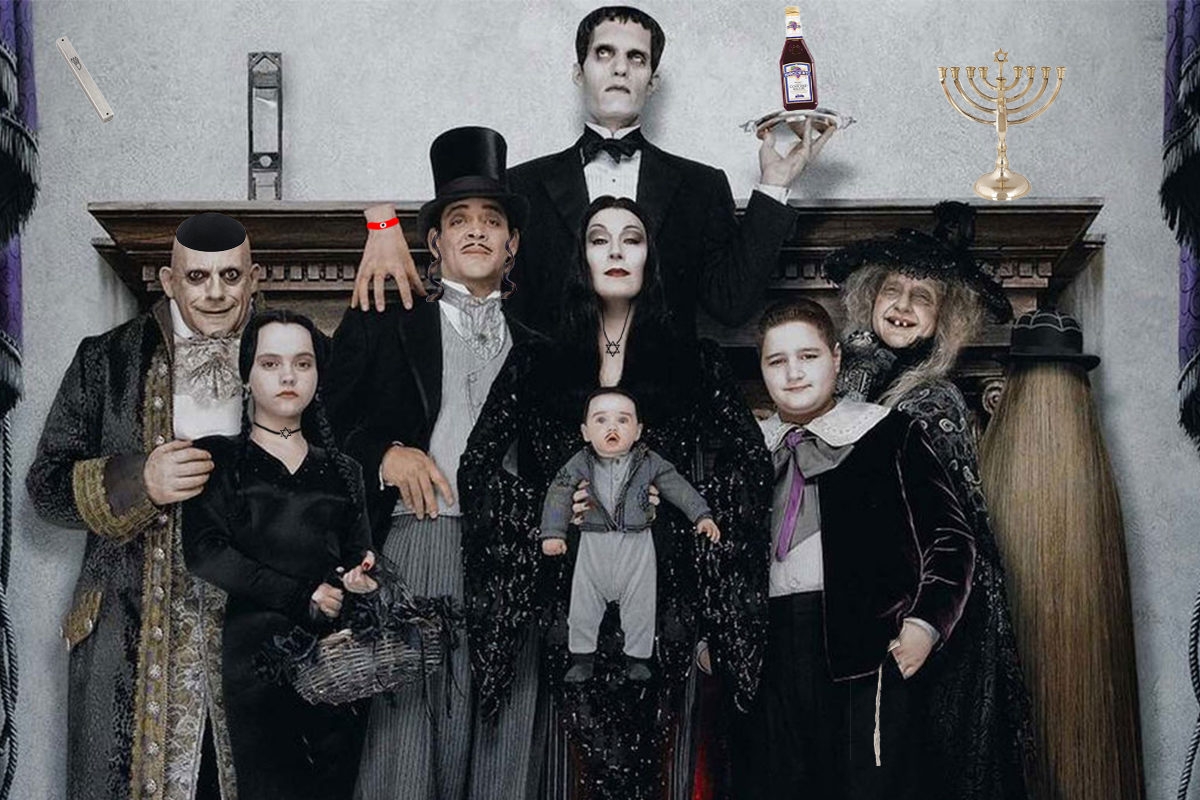 Well, not quite. But between Morticia Addam’s Yiddish pet name for her husband, Gomez Addams, and to the very Jewish writer (Paul Rudnick) behind the movies’ scripts, it’s safe to say that the Addams family is, at least, Jew-ish.

Hulu keeps adding to its vast trove of movies, and — huzzah! — The Addams Family and its sequel, Addams Family Values, are available to stream now. Notably, these hit movies (from 1991 and 1993, respectively) are not based on the ‘60s sitcom, but on the TV series’ original source material: the drawings of New Yorker cartoonist Charles Addams.

In honor of the iconic movies’ arrival to your TV or home computer, we searched far and wide to gather all the Jewish facts from The Addams Family movies.

2. Jewish director Barry Sonnenfeld — best known for Men In Black — made his directorial debut with The Addams Family. In the sequel, Sonnenfeld makes a cameo!

3. While filming a scene for The Addams Family — when Gomez discovers his wife Morticia tied up, bondage style — legend has it that Julia kept flubbing his line, which was in Spanish. So Sonnenfeld told the actor to take it from the top “for the Hebrew version.” According to Rolling Stone, Julia asked, “How do you say ‘leather straps and red-hot pokers’ in Hebrew?” When Sonnenfeld confessed that he didn’t know, Julia asked about Yiddish. “Leather straps and red hot pokers? Oy vey iz mir!” Sonnenfeld replied, sending the whole set laughing.

4. In Addams Family Values, everyone’s favorite spooky teenager Wednesday Addams and her brother, Pugsley, are sent to a sleepaway camp. But not just any camp — a Jewish summer camp! While not explicitly mentioned in the movie, Camp Chippewa is a real camp in Wisconsin that’s popular among upper-class, Jewish households.

5. Marc Shaiman, one of the producers and composers of The Addams Family music, is Jewish — and his cultural background clearly inspired his work on the film. There’s “Family Plotz,” a beautiful instrumental song that accompanies Gomez as he reminisces about his long lost brother, Fester. When Fester returns to his family after a mysterious 25-year disappearance, Gomez celebrates by dancing to “Mamushka,” a traditional Addams family celebratory dance that is remarkably hora-like.

6. In Addam’s Family Values, Uncle Fester (Christopher Lloyd) marries the gold digging nanny Debbie Jelinksy (Joan Cusack). As Wednesday, the flower girl, walks down the aisle, a spooky rendition of “Sunrise, Sunset” from Fiddler on the Roof is played on the piano.

8. Wednesday’s love interest in Addams Family Values is Jewish (and is played by Jewish actor David Krumholtz). Portrayed as a stereotypical Jewish teen, Glicker wears glasses, is allergic to everything, and has a neurotic mother. The pair meet at summer camp, and share one kiss under the pretense that they’d never see each other again. In an interview with Hollywood Reporter, Rudnick said that Glicker “was a reflection of Barry, Scott Rudin, and myself, because we’re all nice Jewish boys.”

9. Actually, the Addams Family was filled with Jewish contributors. The late Judith Malina, who played Grandmama Addams in The Addams Family, is a Jewish German immigrant, and Dan Hadaya, who played Tully Alford, the evil lawyer who plotted to steal the Addams’ fortune, was born to a Sephardic Jewish family.

11. When The Addams Family sitcom aired in the ‘60s, it was seen as subtle commentary on racism in the United States. While audiences were growing to love the quirky and spooky Addams family, Jews and black Americans were moving into previously all-gentile and all-white neighborhoods. The TV show represented the social issue that “monsters” were invading white territories. Likewise, The Addams Family and Addams Family Values addressed the same issues, inviting viewers to accept the monsters for their loving personalities, despite their different appearance. Welcoming the stranger — clearly that’s a Jewish and an Addams Family value!