15 Jewish Things to Know About the ‘Toy Story’ Movies 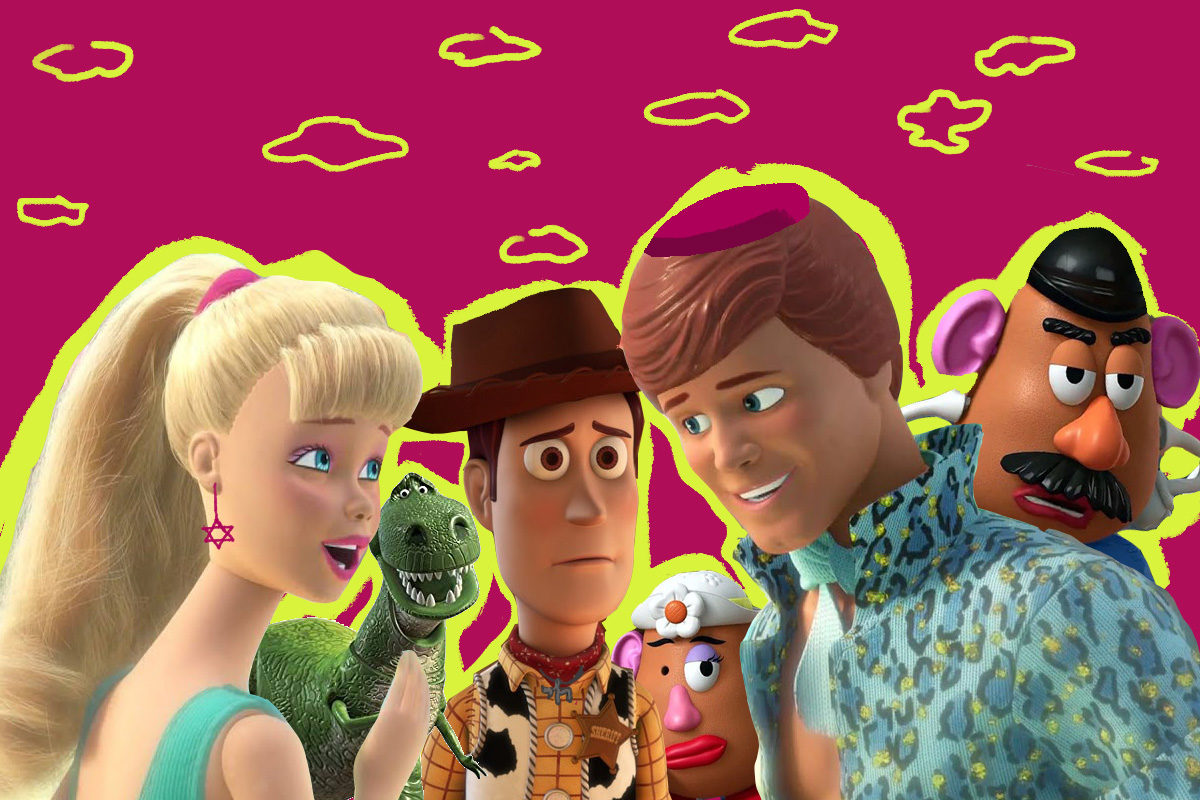 Toy Story 4 opened on Friday, June 21, grossing $118 million in North America its first weekend. Fans and critics are raving about it, and the movie even has a strong feminist twist! Honestly, we’re not surprised — like pretty much everyone with a pulse, we’ve loved this critically-acclaimed franchise from its very beginning back in 1995, when it was the first-ever fully computer-animated feature film, and thereby completely changing the landscape of what animated movies looks like.

But Toy Story isn’t just about shiny, 3D animation. First and foremost, it is a series of wonderful stories about the magic of toys. It’s been nearly 25 years since we first met Sheriff Woody (Tom Hanks), an old-fashioned cowboy toy, whose primacy in the toy box is threatened by the super modern, super ridiculous Buzz Lightyear (Tim Allen). The franchise never gave up on its high standards — it was nominated for 10 Academy Awards and won three.

Now Toy Story itself is not a very Jew-y series — unlike, say, Star Wars — but it does have some pretty amazing Jewish individuals behind the scenes, as well as a few fun Jew-ish tidbits. And here at Kveller, we want to celebrate them! Here are 14 Jewish facts about the Toy Story franchise:

1) Toy Story may not have existed at all if it wasn’t for Jewish bigwig Jeffrey Katzenberg, who at the time was working for Disney (Katzenberg later went on to start DreamWorks, bringing us the great Prince of Egypt). After he saw future Toy Story director John Lasseter’s Academy Award-winning Pixar animated short, Tin Toy, Katzenberg suggested that Disney collaborate on a feature with Pixar, the animation studio owned by Steve Jobs. And while the relationship wasn’t always smooth sailing, the movie did end up being released, of course, and for that we are grateful!

2) Lee Unkrich, who was an editor on the first Toy Story and a co-director of Toy Story 2, made his solo directorial debut on Toy Story 3, for which he won an Oscar. He then went on to direct the fabulous, Oscar-winning Pixar feature Coco. Despite all this success, Unkrich — whose mother is Jewish and whose father converted to Judaism — recently quit Pixar after 25 years. The reason? The father of three wanted to spend time with his kids. What a mensch!

3) The legendary Randy Newman composed the gorgeous, captivating soundtracks of all four of the films. (Who could ever forget “You’ve Got a Friend in Me?”). Newman was born to Jewish parents in 1934, but he was raised without any religious identity. In fact, as he told Rolling Stone, once, as child, he was uninvited from an event at a country club because Jews weren’t allowed. Young Randy turned to his father and asked, “What’s a Jew?” Talent clearly runs in the family — the Newman family boasts a total of nine composers, and they’ve been nominated for a total of 92 academy awards! Wow!

4) Woody was almost played by a Jewish actor! The studio approached both Paul Newman and Billy Crystal to play the part. And while the two actors declined, they did go on to star in other Pixar features: Newman in Cars and Crystal as the unforgettable Mike Wazowski in Monsters, Inc.

5) Joel Cohen co-wrote the script for the first Toy Story. The Jewish writer was co-nominated for an Academy Award for his contribution. He later went on to co-write the script for Evan Almighty, the sequel to Bruce Almighty and a modern day retelling of the biblical Noah’s Ark story.

6) There is a pretty far-fetched theory that sees Toy Story 3 as a metaphor for the Holocaust. Yes, really. There’s even a lesson plan that breaks down different plot points in the movie and compares them to events of the Holocaust, such as the toys’ unawareness of the dark future ahead of them while they were getting packed away in Andy’s room. Honestly, it’s a bit much, and I don’t really think it’s what director Unkrich was going for, but I can’t deny that I had similar thoughts when I saw the toys on the conveyor belt, headed to an incinerator. DARK!

7) Don Rickles was amazing as Mr. Potato Head. The hilarious comedian was born in 1926 to Jewish immigrants from Lithuania and Austria. He grew up in Jackson Heights, Queens, and was discovered after heckling Frank Sinatra. Talk about chutzpah! The icon died in 2017, but his trademark voice and character remain part of Toy Story 4, posthumously. Rickles’ family very much wanted him to be part of the fourth movie, and so, the Toy Story team went through 25 years of unused Mr. Potato Head audio to piece together his dialogue for the film. What an amazing tribute! In fact, the entire movie is dedicated to his memory.

8) Mrs. Potato Head is also a member of the tribe! She’s played by Estelle Harris, whose parents were Polish Jewish immigrants who owned a candy store. Does her voice sound familiar? You probably know her as Estelle Costanza, AKA George’s mother in Seinfeld.

9) Speaking of Mr. Potato Head, did you know the toy had a Jewish inventor? George Lerner, the son of Jewish immigrants from Romania, invented the toy, which at first was a styrofoam ball with different pin-able facial features, though kids were encouraged to use real fruit and veggies. The Hassenfeld brothers — three Jewish siblings —  took a chance on the invention, releasing the first Mr. Potato Head in 1952. Hassenfeld Brothers later became Hasbro, one of the biggest toy companies in the world. And after parents complained about rotting vegetables (ew!), the company created its current plastic potato iteration in the 1960s.

10) Speaking of toys created by Jews, Barbie, whose inventor was Jewish, was originally supposed to be Woody’s love interest in the first Toy Story. Unfortunately, Mattel, which makes Barbie, declined — and so, the Toy Story team came up with Little Bo Peep (who we love!). But after Mattel saw how the original movie boosted toy sales for other companies, they allowed Pixar to use Barbie and Ken in the second and third films, making for some of the funniest parts. LOVE!

11) Another Jew-ish toy from the original Toy Story cast is no other than the adorable, goofy dinosaur Rex! Rex is played by Wallace Shawn, our fave as Vizzini from The Princess Bride — “inconceivable!” — though he is literally great in everything he does. Aside from being in about every TV show and movie ever, Shawn is also a prolific writer. No surprises here, since he is the son of longtime former New Yorker editor William Shawn and journalist Cecille Shawn.

12) The one and only Mel Brooks is in Toy Story 4. The Jewish comedian, who was born in 1926 to Jewish immigrant parents, credits his sense of humor to his rough childhood in Williamsburg, Brooklyn. He plays… wait for it….  Melephant Brooks. We love it!

13) Carl Reiner is another Jewish legend joining the Toy Story 4 cast. Who does the hilarious Jewish comedian play, you ask? Well, it’s a character called Carl Reineroceros. TOO GOOD!

14) June Squibb plays Margot the Shop Owner in Toy Story 4. The beloved actress converted to Judaism  in the 1950s before marrying her first husband, actor/director Edward Sostek. While the marriage quickly ended in divorce, Squibb continues to identify as Jewish and says she loves celebrating holidays with her Jewish friends.

15) There are some truly hilarious theories about which Toy Story characters are Jewish. They are all worth your time, though personally I think the neurotic, self-important Woody just may be a member of the tribe.

The aliens from toy story are just green versions of every Jewish grandmother. They only speak in incomplete sentences, travel in groups, and are very caring in the least expected way. Thank you for coming to my TED talk.

I'm going to see Toy Story 3 just to laugh at how Jewish they made the pig. Coincodence that he's a piggy bank? I think not.

So Forky is the Jewish Toy Story character Y/Y? pic.twitter.com/IMD5e8aioh

Anyone ever notice how Jewish Mrs. Potato Head is in Toy Story 2? She must be a Yukon Goldstein.