21 Years After its 'Friends' Debut, the Holiday Armadillo Is Having a Moment – Kveller
Skip to Content Skip to Footer

21 Years After its ‘Friends’ Debut, the Holiday Armadillo Is Having a Moment 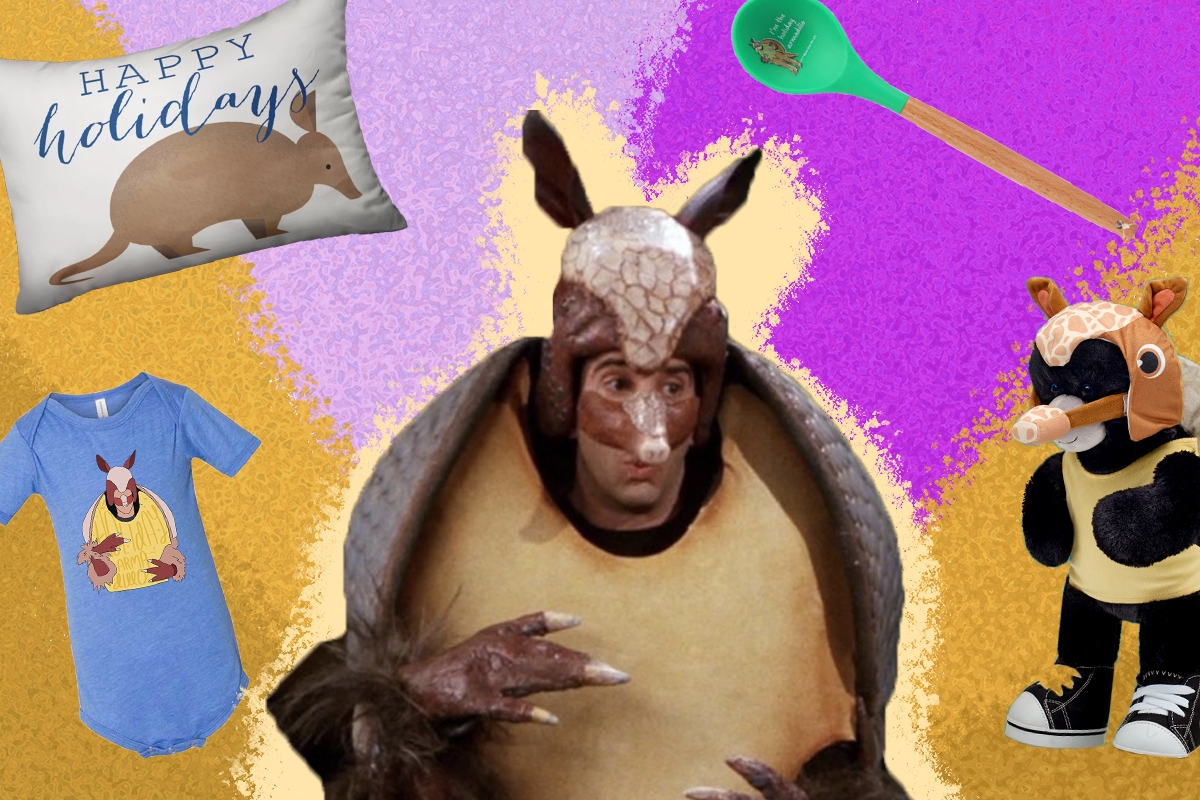 This is the one where a random sight gag from a popular sitcom re-emerges as the star of holiday merchandise 21 years after it originally aired. Yes, I am talking about the Holiday Armadillo from “Friends,” which seems to be this year’s latest trend.

For those who didn’t spend the better part of their high school days watching every episode of “Friends” with religious fervor (which somehow led to watching the series finale with my best friend at her grandmother’s shiva… long story), the seventh season brought us “The One With the Holiday Armadillo.” Set in late December, the episode follows Ross Geller (David Schwimmer), who is excited to have his young son Ben staying with him during the holidays. Ross (and his sister Monica) are Jewish, while Ben’s mother, Ross’ ex-wife, is not. Like many parents of interfaith kids before him, Ross is concerned that Ben enjoys all the twinkly fun of Christmas without knowing enough about Hanukkah and his Jewish roots.

So, he sits him down in front of a menorah and tries to teach him all about the Festival of Lights. Except as he tries to explain Hanukkah — “Hanukkah is the celebration of a miracle. Years and years ago, there were these people called the Maccabees…” — he’s interrupted by Ben’s joyous rendition of “Jingle Bells.” Ross tries to counter that with “Dreidel, Dreidel, Dreidel,” to which Ben responds with “Rudolph the Red-Nosed Reindeer.”

“OK, it’s not a contest!” Ross frustratingly exclaims, but it’s kind of starting to feel like it is, and Ross is losing. When Ross implies that this year, instead of a visit from Santa, they would be celebrating Hanukkah, Ben wonders why Santa’s mad at him. No parent, Jewish or not, can handle that kind of guilt, so Ross backtracks and exclaims that Santa is, indeed, coming.

Except it’s too late in the game to rent a Santa costume, so he’s stuck with the next best thing: a slightly terrifying armadillo costume, hard shell and giant tail included. And thus, the Holiday Armadillo is born.

Dressed as an armadillo, Ross uses the opportunity to wish Ben a merry Christmas while also telling him all about Hanukkah (“Because armadillos also wandered in the desert?” Monica sarcastically asks). It’s actually a sweet moment in which Ben is eager to meet a fellow “part Jewish” being, and we see how important it is to Ross that Ben connect with his Jewish identity, even though it can be a struggle at times.

But anyway, like I said, this episode aired in the year 2000, which yes, despite feeling like yesterday, was 21 years ago. So why is the Holiday Armadillo suddenly sprouting up all over the place?

Well, I don’t know. Maybe we’re still running off nostalgic fumes from the “Friends” reunion that aired earlier this year, or maybe, like scrunchies and flared jeans, everything comes back in style eventually.

David Schwimmer himself is probably happy about this armadillo resurgence — back in 2016, he revealed that the one episode he most wanted to show his daughter, Cleo, who was 5 at the time so is 10 years old now, is “The One With the Holiday Armadillo.”

“I mean, it was really fun,” Schwimmer said. Someone get this man an armadillo spatula, stat!

Basically, if you like your holiday pop culture references old enough to legally drink, this is your year to celebrate the interfaith joy of the Holiday Armadillo. Check back here in 21 years to see which random reference from “Ted Lasso” we’re commercializing then.

4 Steps for Talking to Kids About Mass Shootings