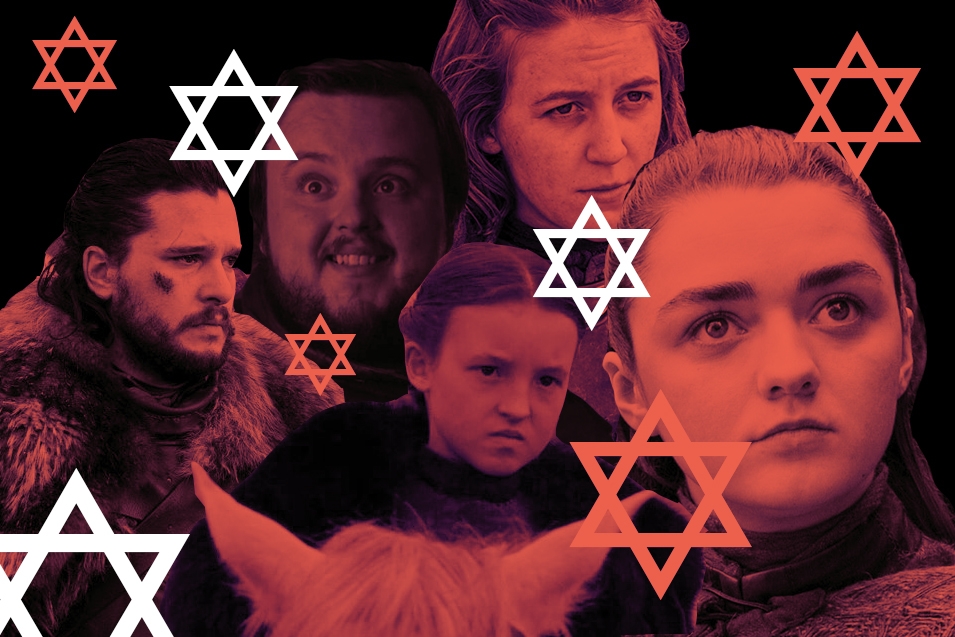 Welp. Winter was here, my friends, and now, Game of Thrones is coming to an end. Who will make it to the Iron Throne? Will it be Cersei, Daenerys or…. someone else? The suspense is almost too much, and I’m loving it.

Regardless of your feelings about the most recent episode — the much-awaited battle with the Night King and his army — if you’ve made it this far in the eight-season series, we’re pretty sure we can call you a fan. And you are hardly alone. The show — based upon the book series by George R. R. Martin, and headed by two incredible Jewish showrunners, David Benioff and D. B. Weiss — continuously breaks viewership records.

One of the many things Game of Thrones has going for it is an amazing, huge cast of characters with original and very cool names, some of whom you may have forgotten already (I mean, to be fair, the show has brutally killed about half of them). All men must die, whether onscreen or in outtakes (SPOILER), and you can be sure that there will be more deaths before the final episode ends. After all, when you play the game of thrones, you win or you die — there is no middle ground.

Fear not, however. There is one way to immortalize your favorite Game of Thrones characters — you can name your offspring after them! Yes, OK… it may sound like a bit much, even for the most die-hard fans. But it turns out there are a host of genuinely beautiful Jewish names that relate to the series and will stand the test of time, long after your watch (of Game of Thrones) has ended.

Jon — Is Jon Snow short for Jonathan? Or maybe Jonah? Is it possible that Jon Snow is secretly a Jew? I mean, there have already been enough surprises about Jon’s real parents (no spoilers here!) so it’s possibly possible.

Liana — The young Lyanna Mormont — a tiny, amazing firecracker — became the head of House Mormont when her mother died at the Red Wedding. She’s named after Lyanna Stark, Eddard Stark’s sister. Liana is a Hebrew girl’s name that means “to me, he answered.” You could also go for Eliana, meaning “God has answered.”

Samuel — OK, we know Jon Snow’s BFF is Samwell Tarly, but it sounds almost the same as Samuel, which means “God has heard.” Since both can be shortened to Sam, we’ll take it.

Gilly — Gilly, Samuel’s brave wife, does have an actual Jewish name! It’s a unisex name that means “my joy.” You can also go with Gil for short.

Mira — Mira is a girl’s name that means “rising water.” It’s an ode to the wonderful Meera Reed, the sister of Jojen Reed, who helped Bran on his journey beyond the wall to meet the Three-Eyed Raven.

Yaara – Yaara is a girl’s name that means “woodland” in Hebrew. It’s also pretty close to Yara Greyjoy, who is, hands down, the best Greyjoy.

Dani — Dani is Daenerys Targaryen’s (AKA Mother of Dragons) nickname, and we love it. It’s also a common nickname for the Hebrew names Daniel or Daniella. Daniel was a biblical figure who God saved from a den of lions — could this be foreshadowing about the confrontation between Daenerys and Cersei Lannister, whose house crest is a lion? Who knows! Dan also means “judged,” which is fitting for a character so obsessed with justice.

Jacob — Jaime is the Spanish and Portuguese version of Jacob, a boy’s name meaning “to follow.” Jaime Lannister is also a guy who killed a king and slept with his own sister, so at first sight, not really someone you’d want to name anyone after. But the Lannister brother actually has had one of the most profound, redeeming character arcs in the Game of Thrones universe. So good on him!

Aryeh — A girl has no name. But does she have a Jewish name? Actually, yes… sort of. Brave, badass, inspiring, independent lady Arya Stark is SO worth naming a kid after, and there are several super-close options. Aryeh is a boy’s name that means “lion.” Another option is Ariel, a unisex name that means “God’s lion.”

Benjamin or Binyamin – This boy’s name means “son of right hand.” It’s an ode to Benjen Stark, is the uncle of the Stark children, and the first ranger of the Night’s Watch, who disappeared beyond the wall only to make a surprise, epic comeback.

Hod — Short for Hodor. (OK, not really, but Hodor was amazing and we miss him dearly.) Hod means “grace and opulence,” and it’s a popular unisex name in Israel.

Or – Another ode to Hodor? Yes… but it’s also a Hebrew unisex name for “light,” and don’t forget that the incredible Melisandre, the Red Woman, serves the Lord of Light.

Tom — Inspired by poor, poor Tommen Baratheon. Such a sweet soul. Tom is a unisex Hebrew name meaning “innocence and integrity.” Quite fitting.

Ilana — Ilana is a girl’s name that means “tree.” It’s also pretty close to Olenna, as in Olenna Tyrell, the badass scheming grandma we all loved. We were always here for her sass.

David — This boy’s name, after the famous biblical king, could be a nod to the Onion Knight, Ser Davos Seaworth, the loyal hand of Stannis Baratheon. He’s had quite a dreadful journey since season one, but has proven to be a true man of valor!

Shir or Shira — These two girl’s names mean “song,” and remind us of Shireen Baratheon, the youngest daughter of Stannis Baratheon. She was sweet and innocent and yes, met a tragic fate.

Ella — Ella, a Hebrew girl’s name that means “goddess,” pays tribute to Ellaria Sand, the leader of the sand vipers of Dorne. She was fierce and inspiring, and definitely goddess-like.

Inspired by characters and the GoT World:

Malka — A great name in honor of the Khaleesi, the Breaker of Chains, the Mother of Dragons herself, Daenerys Targaryen. Malkah is a girl’s name that means “queen.”

Melech — Melech is a boy’s name that means “king,” as in, the one who sits on the Iron Throne!

Zev — Zev is a boy’s name, and it means “wolf” — that’s right, like the House Stark crest. (Yes, technically it’s a direwolf. Don’t come at me.)

Tzvi — Tzvi is a boy’s name that means “stag,” and it’s the crest of House Baratheon.

Levia — Levia or Livia is a girl’s name and means “lioness.” This could be an ode to Cersei, since the crest of House Lannister is a lion — if you’re one to side with a cunning villain, that is. You do you.

Vered — Vered is a girl’s name that means “rose,” and it’s the symbol of House Tyrell. Sigh. They are missed.

Layla — Layla is a girl’s name that means “night.” Like the Night’s Watch. Or the Night King, who is apparently, pretty hilarious IRL.