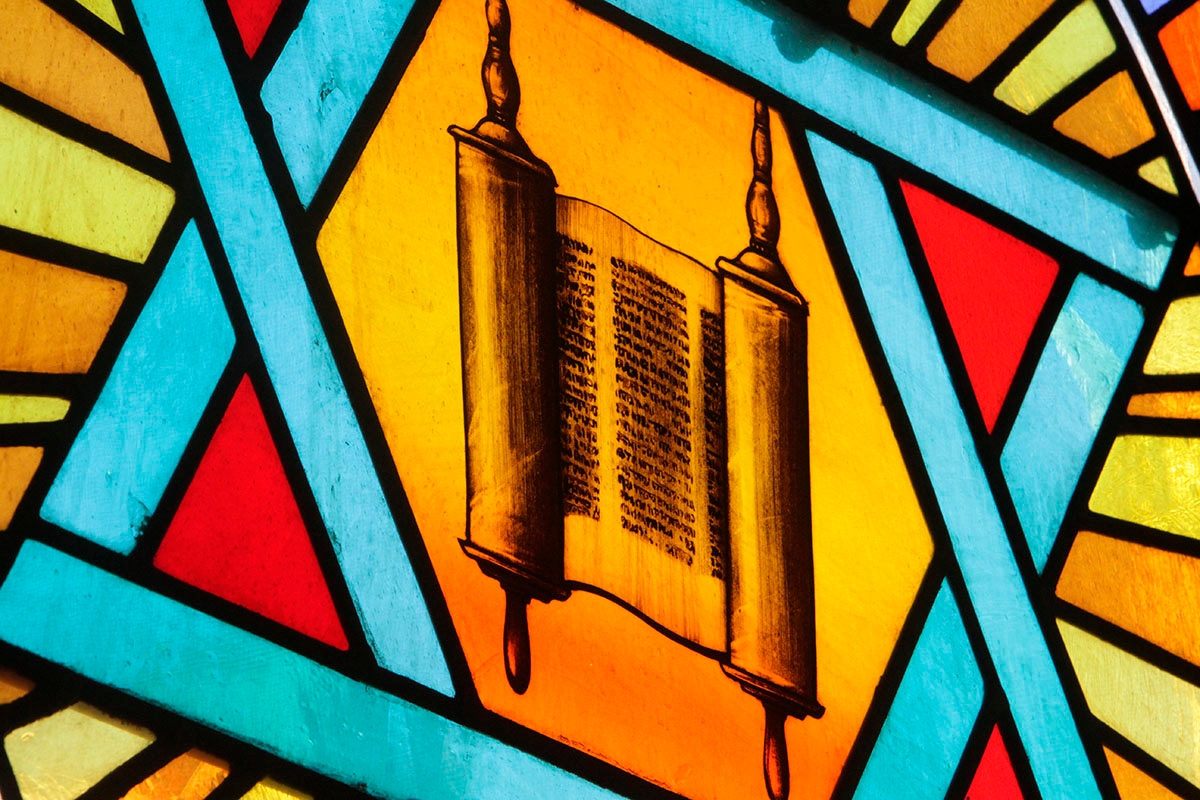 All holiday-ed out yet? Course not! We’re Jews, after all, and celebration is our middle name! Simchat Torah is the last of the four major holidays this Hebrew month (excluding Shabbat) and so lets cherish it until Hanukkah.

Simchat Torah means “Rejoicing in Torah,” and is joyously celebrated this year beginning at sundown on October 17. We mark the completion of another yearly reading of the Torah by reciting the concluding verses — and, in the same breath, we chant the first words of Torah to begin the year anew. After a month of reflection, apologies, self deprivation, manual labor and sleeping in nature, Simchat Torah is a true party!

So, brush up those dance moves, grab your reading glasses and hora the night away with these interesting Torah and Simchat Torah facts:

1. The Torah is divided into 5 books.

The Torah is composed of five books, titled: Genesis, Exodus, Leviticus, Numbers and Deuteronomy. (In Hebrew, their names are Beresheet, Shemot, Vayikra, Bamidbar and Devarim.) Need an entertaining yet didactic escape? Read Genesis —  it speaks of the trials and tribulations of our three patriarchs (Abraham, Isaac and Jacob) and four matriarchs (Sarah, Rebecca, Rachel and Leah). Exodus through Deuteronomy is the Passover story and highlights God’s liberation of the Israelites from bondage in Egypt and, once again, the trials and tribulations of our people as they wander through the desert for 40 years. In addition to the narrative history of the first monotheistic religion, 613 positive and negative mitzvot (commandments) are sprinkled throughout.

2. Torah is chanted Saturdays, Mondays, Thursdays and on holidays (regardless of the day on which it falls).

One of my favorite aspects of Judaism is intention; nothing is arbitrary or random. Tremendous thought, debate and discussion went into every decision — including the choice of days Torah is read. The Talmud credits Ezra the Scribe, a 5th-century BCE prophet in Jerusalem, for setting the Torah chanting days, and gives two logical reasons: Mondays and Thursdays were the most popular days for the local Jewish population to conduct their trading and shopping. It was also felt that one should not go more than three days without sacred substance, and therefore, those days allotted the appropriate time between chantings.

Torah is also read on holidays, regardless of what day the holiday falls on. There are designated Torah portions chosen to highlight certain themes the holiday celebrities and do not follow the chronological order. After the holiday ends, we pick up right where we left off in our Torah reading.

3. The Torah is devoid of all vowels and punctuation and must be chanted!

Ys thts crrct…!!! Ask any b’nai mitzvah student the most difficult part of their studies and almost unanimously it is the actual reading from the Torah scroll itself. While beautiful and precious, the Torah is challenging to sight read because the words are without vowels and there is not a punctuation mark to be found —  just the same as in ancient times!

Scholars believe that back in the time of Ezra, the patient prophet would publicly “chant” Torah among the hustle and bustle of the town square by essentially musically shouting our Scripture. The chanting not only allowed for a larger and more enthusiastic audience, but also added diction and emphasized certain phrases that were more important. While Torah continued to be sung, it was not communally set until the 9th and 10th centuries by the masoretes or scribes who lived in Tiberias. They identified 28 different te’amim, or symbols representing a string of musical notes (known as “trop signs” in Yiddish). These small symbols were added to each Hebrew word to function as accent signs, punctuation and to highlight essential phrases. Trop signs, like vowels, remain absent from the Torah scroll — instead, Torah readers learn to chant their portions from other printed sources of Torah in which punctuation is included. Trop melodies traditionally differ depending on their locational origins, however, most modern congregations utilize the trop system from Poland and Lithuania.

4. It takes nearly an entire year for a very specialized scribe to create  a Torah!

I’m sensing a pattern here… A sofer, or scribe, a highly trained calligrapher and scholar, must not only be extremely versed in Scripture but also pious in observance. The entire process of writing a Torah takes about one year and can range in price from $35,000 to $120,000. The scroll itself is made from parchment — skin taken from a kosher animal — and is sown together in panels. The scribe uses a unique ink and a quill usually made from a turkey feather to illustrate each Hebrew letter, precisely measured to fill the designated 42 lines and three to eight columns on each sheet of parchment. The ink is so delicate, the words cannot be touched by human hands for fear of smudging, or worse, getting schmutz on the Torah!  For this reason, a yad or pointer is used as a placeholder while chanting Torah.

5. It used to take three years to read the entire Torah, now we complete it every year!

And thus, Simchat Torah was born! The earliest tradition of reading Torah over a three-year period is known as the Palestinian triennial, by which the Torah was divided into 155 parshiot (portions). By the 8th century, the Jewish population adapted an annual cycle of completing the Torah as was influenced by the original custom of Babylonian Jews. The Torah was broken down into 54 portions in Babylon, which is not terribly far off from the number of weeks in a year, and therefore, each week one parsha (portion) was read, and depending on the year, two portions are paired together. Not bad, huh? Torah has been chanted publicly and continuously for at least 2,400 years, so… let’s keep it going, shall we?!

6. Two unique practices take place on Simchat Torah: The Torah is read in the evening and children receive their own aliyah!

Simchat Torah is a true celebration complete with dancing and singing. Rabbi Michael Strassfeld in “The Jewish Holidays” takes us through this party’s order: After the ma’ariv (evening) service, the ark is emptied of its Torah scrolls  and  distributed among the congregation to be held and passed onto others and joyously danced with during each of seven hakkafot (circlings around the synagogue). This jubilation goes on well into the night!  After everyone has gotten jiggy with it, the Torah scrolls are returned to the ark — all but one, and the evening ends with the last portion of Deuteronomy chanted for everyone to hear. The very last verses, however, are saved for the next morning. This Torah reading in the late evening is unique to this holiday, setting  it apart from other Jewish festivals.

On the morning of Simchat Torah, everyone in the congregation — including those under the age of 13 — receive an aliyah (a blessing over the Torah). The middle portion of the last chapter of Deuteronomy (Deuteronomy 33:1-26) is chanted as many times as it takes to ensure that EVERYONE has had the opportunity for this holiest honor. The final aliyah is reserved for the children, called kol ha-ne’arim, (Parents: clever trick to get your kid to stay through the whole service, no?) followed by the chanting of the final verses of Deuteronomy. As the hatan Torah (groom of the Torah) recites the last words, he quickly switches Torah scrolls to one that has already been rolled to the very first portion and chants the first verses of Genesis. Wow! It’s almost like the Jews invented binge-watching!

7. Our ancient scripture has withstood the test of time and continues to remain relevant.

All of these facts about the Torah are interesting, but the greatest question of all still stands: Why do we continue to read the Same. Text. Every. Year? Well, ever watch your favorite movie for the umpteenth time and notice something different? Or a cherished book read at the right moment touches our souls just the way we need? I feel fortunate that every time I have been lucky enough to read the Torah cover-to-cover; its words captivate me a little differently than before, no matter what stage of life I’m in. As 1st century CE sage Ben Bag-Bag said in Pirkei Avot 5:22, “Turn it, and turn it, for everything is in it. Reflect on it and grow old with it. Don’t turn from it for nothing is better than it.”

So, what are we waiting for? Let’s go read some Torah! Chag Sameach!