7 Sweet Facts About Rosh Hashanah You May Not Know 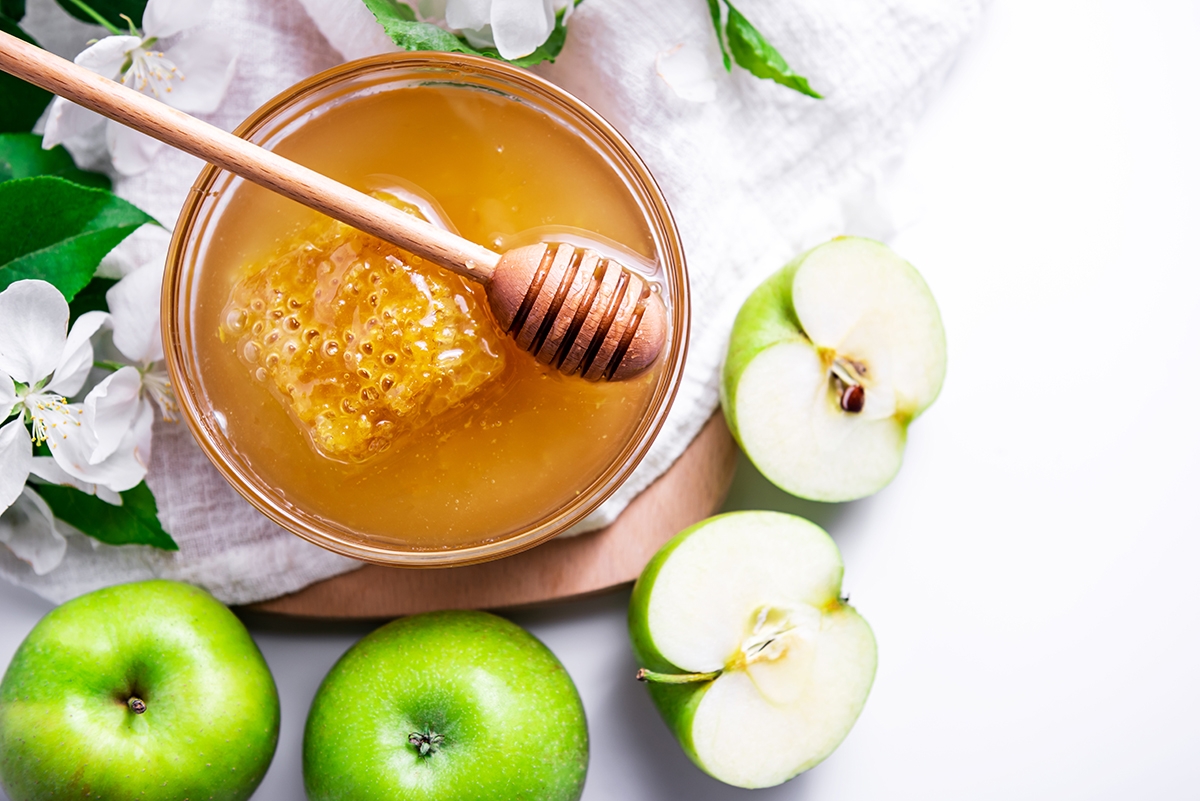 Shanah Tovah, Happy, Healthy New Year!  The Jewish New Year, Rosh Hashanah, is nearly here. I can tell this coming year is going to be a good one — the bar is already so low, we can only go up from here!

Rosh Hashanah, or “Head of the Year” is observed this year from sundown on September 25 through September 27. Rosh Hashanah celebrates the beginning of the next year on the Hebrew lunar calendar, and is a time of great reflection, repentance and, of course, guilt.

In honor of this very important Jewish holiday, we eat special foods, don white attire, hear the shofar, attend or stream services, give tzedakah, and, in my family, at least, make brisket and tzimmes (though I personally skip the tzimmes). Perhaps most important, we contemplate how we can improve our actions in the coming year. With all of the food, remorse, praying and thinking, Rosh Hashanah is the classic Jewish holiday.

So, take a break from your apple stamping project and enjoy these fun facts that are sure to make your Rosh Hashanah a blast:

Wait, according to this date system, does that make me younger? The year 5783 counts the years since God created the world, as described in the very first portion of the Torah, Genesis Chapter 1. Just how did we arrive at this number? Many estimates were suggested by scholars, although Rabbi Yossi Ben Halafta’s calculation (which he made around 165 CE in Israel) became the most widely accepted.

Through careful study of the Hebrew Bible, with special emphasis on the dating of biblical figures’ lifetimes and kings’ reigns, the established date of 70 CE (the destruction of the Second Temple) was used as the end point, and counting started backwards from there. Rabbi Yossi Ben Halafta established that God created the world on Monday, October 7, 3761 BCE. (using Gregorian calendar terms). And now it’s math time: 3761+2022=5783!

2. The name “Rosh Hashanah” is not mentioned in the Torah

It’s true: This major Jewish holiday is not mentioned by name in the Torah! Instead, it is referred to as Yom Teruah (Day of Sounding the Shofar) and Yom HaZikaron (Day of Remembering). The holiday becomes identified as “Rosh Hashanah” during the 1st century CE in Mishnah Rosh Hashanah 1.1.

3. Rosh Hashanah celebrates the New Year, but falls on the first day of the seventh month!

Like so many Jewish holidays and traditions, there are several and conflicting theories as to how Rosh Hashanah evolved, and how we came to celebrate the new year in the seventh month on the Hebrew calendar. Among the numerous interpretations, I wish to share my favorite: In the 13th century, Sephardic sage and rabbi Nachmonidies equated the counting from the months of Nissan (the first month of the Hebrew calendar) to Tishrei (the seventh) to be the same relationship as the first day of the week (Yom Rishon, which literally means “the first day”) with Shabbat (the seventh day). The number seven in Judaism holds sacred significance. It is associated with God’s six days of creation (special, but not super special) to the seventh day of rest, Shabbat (super special!). Counting seven months from the time of our Exodus from Egypt — which, you guessed it, happened in the month of Nissan — emphasizes the holiness of the seventh month of Tishrei, and is therefore the perfect excuse for  a new year celebration.

As the song goes: Wherever you go… not only will you find someone Jewish, you will also celebrate Rosh Hashanah for two days. That’s true whether you’re in Israel or elsewhere! This is in contrast to other important biblical festivals, such as Sukkot, Passover and Shavuot, which are observed for an extra day in the diaspora (outside of Israel), juuuuuust to be sure the correct day is commemorated. (Why? Nearly 2,000 years ago, holiday start times were determined by moon-witness testimony, and then word was dispersed by foot. Extending the holiday by one day compensated for inevitable delays.)

Now, I know what you’re thinking: Why is Rosh Hashanah celebrated for two days even in Israel? Maimonides, 12th-century scholar and philosopher, explains that it is the only Jewish holiday that begins on the first day of a new month, and therefore, witnesses were not permitted to travel to alert their communities on the sighting of a new moon.  To enable complete worship, two days were established and came to be known as yoma arichta, “a long day” lasting 48 hours. Ask any Rosh Hashanah host at the end of the second day, and I believe you’ll find that “yoma arichta” is the perfect description!

5. Apples and honey aren’t the only traditional foods.

Because Rosh Hashanah is a rather serious holiday filled with introspection, repentance and self-improvement, our traditional foods symbolize those themes as well. In Ashkenazi tradition, apples are dipped in honey for the delight in literal sugary sweetness and the hope for a fulfilling year ahead. But that’s hardly the only traditional Rosh Hashanah food: There’s also round challah, as opposed to braided challah, which represents the yearly cycle and God’s crown or majesty.  Fish heads are traditional in Sephardi Rosh Hashanah feasts — “better the head than the tail” is what I was always taught! (“Rosh” is also the Hebrew word for “head,” and therefore, there is a literal connection to beginnings.) Pomegranates are in season during this time in Israel, and are another traditional Rosh Hashanah treat. They were once thought to contain 613 seeds, the same number of mitzvot (commandments) in the Torah —  just don’t tell my daughter, she just started counting!

It is a custom to abstain from eating nuts during Rosh Hashanah for a couple of reasons. According to the Shulchan Aruch, one of the most consulted Jewish law books written by Joseph Caro in the 16th century, nuts not only increase the production of saliva and phlegm in our mouths (a lovely thought) but could perhaps hurt our pronunciation of words recited during services.  As any young Jewish child knows, services are already extremely long on Rosh Hashanah, therefore, anything that hinders our ability to pray should be avoided!

7. The shofar is an integral part of our High Holiday season, although it’s never blown on Shabbat!

YOU HEARD ME!!! As mentioned previously, one of Rosh Hashanah’s Biblical names was “Day of Sounding the Shofar,” and only two details are included in its observance as written in the Torah: to hear the shofar and to abstain from work. Shofars are horns taken from kosher animals and can vary greatly in size, color and shape.  It also takes a skilled musician to make a decent sound — trust me, I’m not one of them!

The shofar is an ancient instrument of communication (figure our modern TV or cell phone alert) and had a multitude of purposes: to declare battle, welcome Shabbat and a New Moon, announce the reign of a new king and so on. Nowadays, one can hear the shofar blown after morning services every day (excluding Shabbat) in the month of Elul, the month preceding Rosh Hashanah — except for the last day, the day before Rosh Hashanah.

The unique sound of the shofar reminds us of an alarm; a reflective wake up call. Maimonides reasoned that the sound awakens our souls and calls to our attention our actions of our past and what we want to change in the future. We are tasked to analyze our relationship with God, ourselves and others and to change for the better.

As for the reason for abstaining from blowing the shofar on Shabbat, that’s due to the fear of carrying the instrument itself! The Talmud explains that it was not the actual sounding of the shofar that was forbidden, but the worry of an inadequate shofar blower carrying their shofar to an experienced shofar blower for help and training on Shabbat that was prohibited. If that is not the most Jewish reason for anything, I don’t know what is!

Wishing you and your family the most healthy, happy, fulfilling new year ahead with blessings abound, Shanah Tovah!