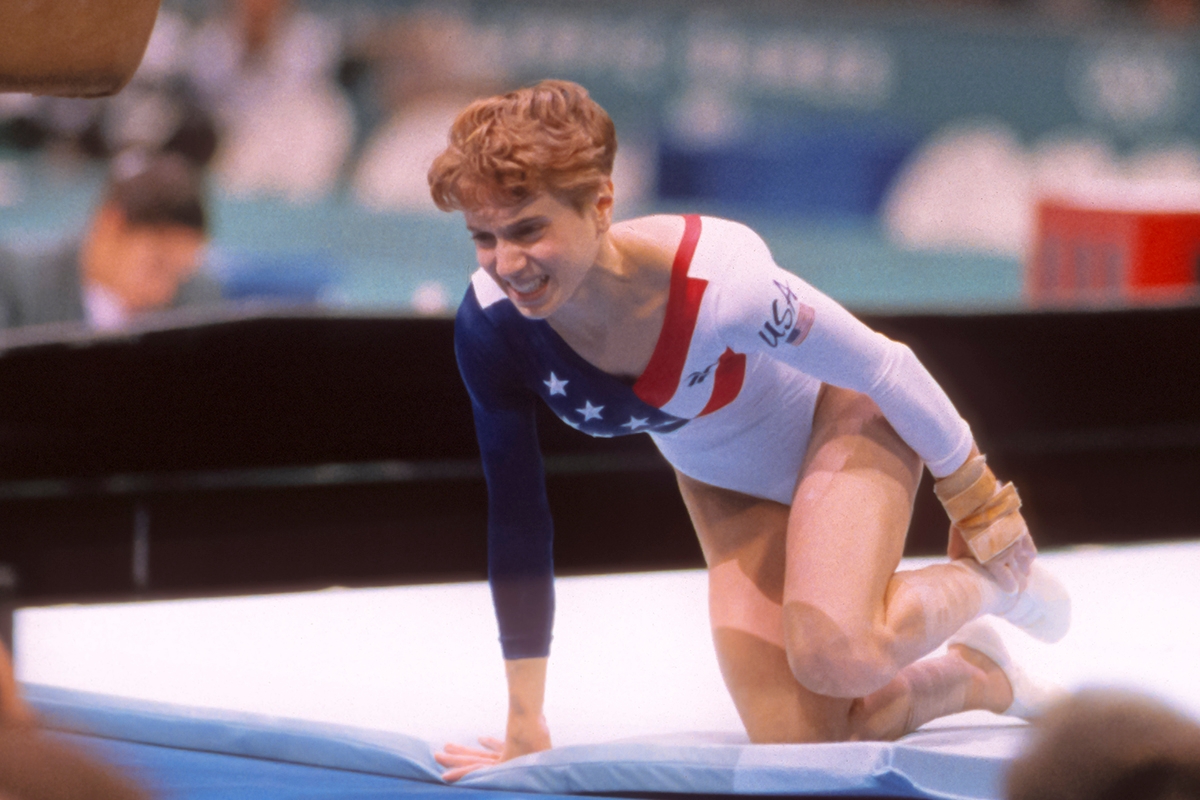 Simone Biles’s decision to withdraw from competition during the 2020 Tokyo Olympics, citing her mental health, has sent shockwaves around the world. Considered by many to be the greatest gymnast of all time, Biles’ decision to remove herself from the Games drew criticism from those you’d expect.

At the same time, Biles received an outpouring of love from fans, pundits and fellow athletes, praising the gymnastics powerhouse for setting a positive example by prioritizing her health above all else.

Fascinatingly, Biles’ actions have also prompted a reexamination of one of the most — if not the most — iconic Olympic gymnastics moments of all-time: when Jewish gymnast Kerri Strug clinched the gold medal in the 1996 Olympics despite having a serious injury. With the encouragement of her coach, Bela Karolyi, Strug continued to compete after injuring her ankle on her previous vault attempt. She vaulted again, stuck the landing — and then collapsed in pain on the mat.

At just 18 years old, Strug immediately became a national hero. Strug’s decision to power through her pain and secure the gold was a HUGE DEAL at the time. Recall, if you will, that in the mid-’90s, the internet was in its infancy, there was no such thing as social media and nobody had ever heard the term “viral video.” And yet, as I very clearly remember, everyone was talking about this.

“I cried,” I recall my hairdresser telling me the following day, as we discussed the previous night’s events. (Like Strug, I, too, was barely an adult in 1996. But while Strug was busy making history that summer, I’m pretty sure 19-year-old me spent those months working at Zingerman’s Delicatessen and drinking Honey Brown lager.)

In the aftermath of her feat, Strug made the rounds on talk shows, graced a box of Wheaties and even made an appearance on “Beverly Hills, 90210.” And, well, after a while, that was that. I don’t recall ever hearing about how her injuries forced her into immediate retirement — Strug never competed in gymnastics again.

Thanks to the magic of YouTube, footage of Strug’s vault is available for anyone who wants to watch it. And while her determination remains undeniably powerful, watching Strug compete despite injury feels more like a tragedy than a triumph, especially in the wake of the horrific USA Gymnastics sexual abuse scandal, and other reports of the abusive relationships of gymnasts and coaches, including Karolyi. (Strug, for what it’s worth, has previously pushed back against accusations she was bullied into doing the vault by her coach.)

In a now-viral Facebook post, a dad named Byron Heath said he cheered Strug’s decision in 1996, but today has second thoughts: “I wasn’t as inspired watching it this time. In fact, I felt a little sick. Maybe being a father and teacher has made me soft, but all I could see was how Kerri Strug looked at her coach, Bela Karolyi, with pleading, terrified eyes, while he shouted back ‘You can do it!’ over and over again.”

Much has changed in the past 25 years (including, possibly, Strug’s perception of the event). These days, Strug is a 43-year-old Jewish mom of two kids. (And, hey, I’m a mom of two, too!) She also tweeted in support of Biles’s decision to exit the competition. As we continue to reexamine Strug’s actions in 1996 through the lens of Biles’s in 2021, we thought we’d take a moment to examine a different journey Strug has embarked upon: that of exploring her Jewish identity. Read on for nine Jewish facts to know about Olympic icon Kerri Strug.

1. Strug was raised in a Jewish home.

Strug grew up in Tucson, Arizona; she was raised Jewish by her parents, Melanie Barron and Burt Strug, a cardiovascular surgeon. She has two older siblings, Kevin and Lisa (who clearly must be awesome). “The first to fall in love with gymnastics was Lisa, the oldest,” Strug’s official bio reads. “She started competing when she was 8 years old, before Kerri was even born. A few years later, Kerri declared that she wanted to be just like her older sister, and she was soon enrolled in a ‘Mom and Tots’ gymnastics class.” Score one for big sisters everywhere!

2. Strug has described her childhood home as “culturally Jewish.”

Her family attended services on the High Holidays but she did not have a bat mitzvah. “By the time I was 7, I was winning competitions and I had to make a choice: Go to Hebrew school or go to the gym,” Strug told the Jewish Standard in 2006. We’ll let you guess which option she chose.

3. She began to explore her Jewish identity after the Olympics.

Strug began to explore her Jewish identity while she was in college. (Strug attended UCLA and later transferred to Stanford University, where she earned a master’s in sociology. Clearly she’s as smart as she is strong!) She has credited her Conservative Jewish boyfriend at the time with acquainting her with many aspects of Jewish tradition, including celebrating Shabbat and other Jewish holidays.

In 1997, she kicked off the multisport event, known as “the Jewish Olympics.” It was her first trip to Israel; in the opening ceremony she carried an Olympic-style torch into the stadium to open the Games. Tragically, that year’s Maccabiah was marred by tragedy: A bridge leading to the stadium where the opening ceremony was held collapsed, killing one athlete and injuring 48 others.

5. Strug has come to view her athletic prowess as profoundly Jewish.

She’s proud of being Jewish, despite repeated encounters with people who expressed surprise at her Jewish identity. As Strug herself wrote in “I Am Jewish: Personal Reflections Inspired by the Last Words of Daniel Pearl”: “I think about the attributes that helped me reach that podium: perseverance when faced with pain, years of patience and hope in an uncertain future, and a belief and devotion to something greater than myself. It makes it hard for me to believe that I did not look Jewish up there on the podium. In my mind, those are attributes that have defined Jews throughout history.” Wow.

6. She had a Jewish wedding!

In 2010, Strug married attorney Robert Fischer in a Jewish ceremony that also incorporated Christian traditions. “They’ll have a Kiddush cup and then a unity candle, so it will be special for both of them,” wedding planner Anne Bryan told People magazine. Bonus fun fact: The wedding took place at Skyline Country Club in Strug’s hometown of Tucson, which happens to be the same place where the parents of Kveller’s incredible editorial assistant got married. Our hearts are full!

I’d be doing you all a disservice if I didn’t dig a bit deeper into Strug’s cameo appearance on a Sept. 18, 1996 episode of “Beverly Hills, 90210” (which, like the gymnastics finals, I also watched during its first airing). In the scene, Strug briefly meets Jewish character David Silver (Brian Austin Green) who, frustrated by class registration at California University, quips: “What do you have to do, win a gold medal or something?” Oddly enough, this was a very Jewish episode of the series, which has Kelly (Jennie Garth) and David take their friend Jimmy, who is Jewish and dying of AIDS, to synagogue to celebrate Rosh Hashanah.

She and her husband are the parents of two children: Tyler William Fischer, who was born in 2012, and Alayna Madaleine, who was born in 2014. “It’s different how your perspective changes once you have a kid,”she told ESPN shortly after Tyler’s birth. “Everybody tells you it’s going to happen, but until you have one, you don’t get it.” These days, the family lives in Washington, D.C.

9. She’s an inductee in the National Jewish Sports Hall of Fame.

In 2008, Strug was inducted into the National Jewish Sports Hall of Fame and Museum. As well she should be! The total number of gymnasts to have received this honor is three: Strug; Mitch Gaylord, the first American gymnast to score a perfect 10, in the 1984 Olympics; and two-time Olympian (and Kveller favorite) Aly Raisman, who was inducted in 2012.