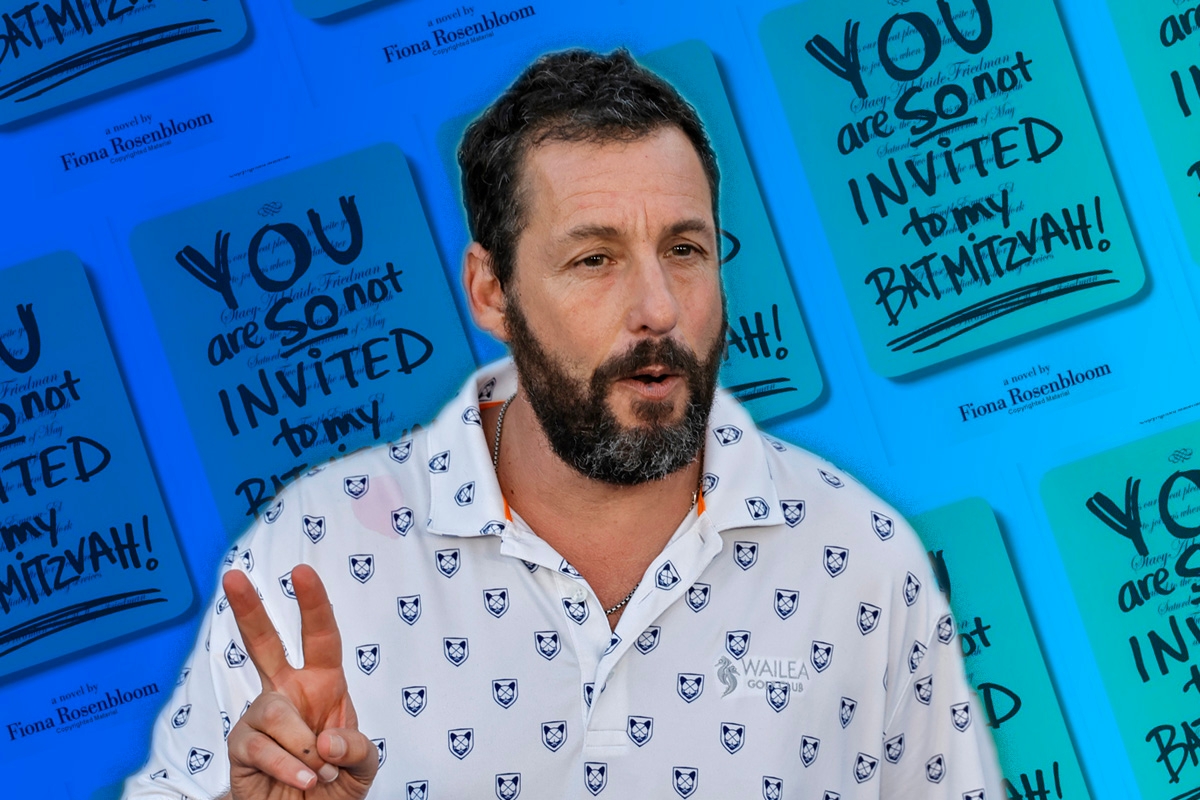 I first encountered Fiona Rosenbloom’s 2005 classic Jewish YA novel “You Are SO Not Invited to My Bat Mitzvah!” in my temple’s library. After reading the synopsis on the back, I knew I had to check it out.

As I wrote for Hey Alma in 2021, “Much like ‘The Great Gatsby’ or ‘Middlemarch’, “You Are SO Not Invited to my Bat Mitzvah!” is a masterpiece of its time. Engulfed in all its mid-2000s glory, complete with references to Ashlee Simpson, Delias and Nokia phones, this novel tells the story of Stacy Friedman, a girl preparing for her bat mitzvah.”

I read and reread the book feverishly, finding the everyday, casual representation of Jewishness heartening and the teenage girl drama delicious. “You Are SO Not Invited to My Bat Mitzvah” represented, simultaneously, everything my life was and everything I wanted my life to be as a young Jewish tween in the mid-late 2000s.

As an adult, when I finally moved into my own apartment, I brought the book with me (unfortunately, I think I’ve lost my copy of the sequel, “We Are SO Crashing Your Bar Mitzvah!”). It is now prominently featured on my bookshelf, resting, in pride of place, directly next to “Reinventing Richard Nixon: A Cultural History of An American Obsession,” a book written by my beloved dad.

So when I heard the news that the next film project from Adam Sandler’s production company Happy Madison Productions will be a movie adaption of “You Are SO Not Invited to My Bat Mitzvah!” for Netflix, I majorly kvelled.

Thinking the Jewish-centric book was too niche for secular crowds, I truly never thought it would get a movie. Now, I’m eagerly anticipating how Adam Sandler and his team will create the world of bat mitzvah girl Stacy Friedman, bestie-slash-frenemy Lydia Katz and crush Andy Goldfarb. Though the release date is thus far unannounced, I can’t wait to see if Sandler will get the mid-aughts nostalgia just right, or if he will opt to make the setting contemporary, perhaps drawing on his own experience of recently attending his daughter’s extravagant bat mitzvah celebration.

As “You Are SO Not Invited to My Bat Mitzvah” reflects fun memories of the 2000s, so too does the book serve as a time capsule for more problematic aspects of that era.

Perhaps the biggest and most egregious example of this is Andy Goldfarb. Despite his presumably being a white boy of Ashkenazi Jewish descent (his parents are named Mintzi and Lenny), he exclusively speaks in AAE (African American English, formerly known as African American Vernacular English) throughout the entire book.

We first meet Andy at the bat mitzvah party of another character. Just read this description and you’ll see the beginnings of appropriation of Black culture.

“Andy was so cool. He knew everything there was to know about rap stars and he wore Sean John clothes and Phat Farm. He even had a personalized belt buckle that said G-Farb,” Rosenbloom writes.

It’s not a promising start, and when Andy first opens his mouth after Stacy asks him to dance, it gets worse.

“But just then, Andy pulled out his cell phone, looked at the text, chuckled, and said, ‘Dig, I gotta run outside fo’ a minute. Chill, a’ight Betty?’”

It goes without saying, but: Yikes.

I am by no means a scholar of African American English, but to put it simply: Regardless of intention, it’s an act of racism when a non-Black person co-opts anything created by and for Black people, including language — especially when Black people are so often stigmatized for engaging in their own culture. (You can learn more about AAE and the appropriation of AAE by non-Black people through these great educational videos from BET and PBS.)

Of course, this is complicated by the fact that Andy Goldfarb is a fictionalized character in a piece of media.

In trying to imagine Fiona Rosenbloom’s intentions, it seems to me that she wrote Andy in this way for two possible reasons. The first is that Andy is supposed to be a super popular kid; as Stacy herself says, he’s supposed to be “so cool.” Though I’m not from Westchester, where the book is set, I think it’s safe to assume that in 2005, it was seen as on-trend for non-Black kids to use AAE — and, while perhaps less overt, it still is today. Think about the last time you heard non-Black kids, teens and even adults use phrases like “period” or “periodt,” “spill the tea,” or “yaaas.”

However, as the reader, we are certainly not supposed to be in agreement with Stacy 100 percent of the time. She is, after all, a free-wheeling and hormonal twelve- or thirteen-year-old. So perhaps Rosenbloom is nudging us to see Stacy’s infatuation with Andy, who really isn’t that great a guy, and question it.
Still, I don’t know if the book’s target audience has a critical eye developed enough to question Andy’s perceived coolness and not become enamored of him, too. When I first read the book as a kid, I certainly didn’t.

Which leads me to my nervousness over the film.

As much as I love Jewish dad Adam Sandler, I don’t know if his creative voice is precise enough to be able to show a white Jewish character using AAE in a way that doesn’t serve as an endorsement of that racist behavior. And unfortunately, I also feel these concerns over other problematic elements of the book. Stacy perpetually fat shames her little brother Arthur under the guise of doing a mitzvah for him, and the popular clique of girls is homophobic towards Lydia because they percieve her to be queer. I could go on.

To be clear, I don’t have the answers on how “You Are SO Not Invited to My Bat Mitzvah” should be adapted. I think omitting the AAE, fat-shaming and homophobia also presents another unique challenge: In removing anything deemed as problematic from the adaptation, would that serve to sanitize the very authentic way they depict American culture in 2005? And if Sandler decides to make the movie contemporary, thereby bypassing the outdated AAE and hurtful/hateful sentiments, does that fully remove the Y2K spirit of the book?

But when “You Are SO Not Invited to My Bat Mitzvah” eventually drops on Netflix, I’ll be the first to hit play, bowl of popcorn and notepad in tow.