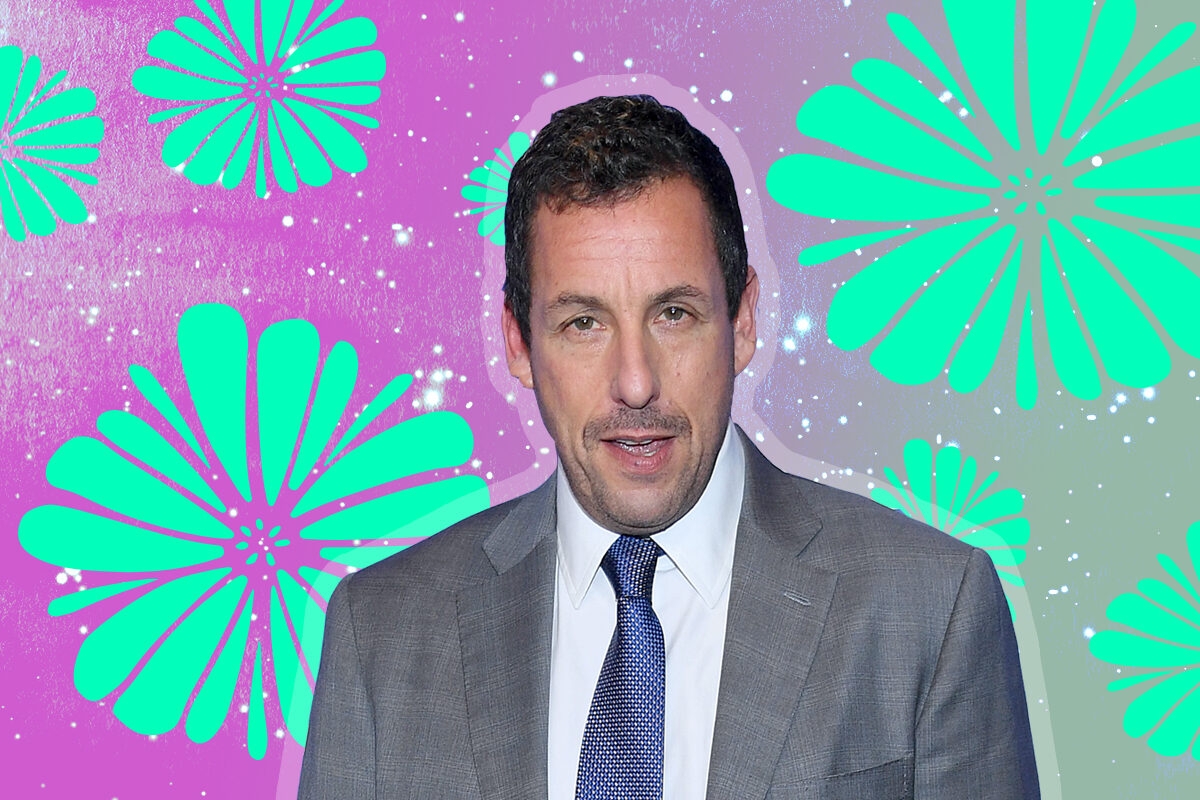 Adam Sandler is Jewish. That’s not something he touts every once in a while, or kind of just is without ever acknowledging it. Rather, Sandler embodies his Jewishness in his films, his comedy, and his fatherhood.

It’s a kind of unabashed Jewish pride. After all, Sandler gave us “The Hanukkah Song,” a holiday anthem to celebrate our secular Jewishness. He gave us role after role of ridiculous but unmistakably Jewish characters — from The Wedding Singer to Don’t Mess With the Zohan. And even in his most serious, dramatic role to date, in Uncut Jems, he gave us an unforgettable Sephardic villain who celebrates Passover and wears a Star of David pinky ring.

In honor of the actor’s 54th birthday today, we wanted to take you through Sandler’s  life and achievements, from his Jewish upbringing, to how he raises his two daughters, to why everyone who knows him says he’s a total mensch:

1) Like many standout Jews, Sandler was born in Brooklyn, New York, to Judy (Judith) and Stan (Stanley) Sandler. His grandparents were also born in Brooklyn, one of his grandfathers worked in the clothing business — or the “schmatta industry,” as he called it, while the other worked as a cab driver.

2) His comic inspirations are as classic and Jewish as could be: the Marx Brothers. “My father would wake me up, and I’d get to watch, you know, ‘Duck Soup’ or ‘A Night at the Opera,’” Sandler told the New York Times.

3) When he was 6, Sandler and his parents settled in Manchester, New Hampshire. Despite the fact that he was one of only two Jews in his class, Sandler had a super Jewish upbringing: he went to Hebrew school, played basketball at the JCC, and was in BBYO. And of course, he had a bar mitzvah, in the basement of his childhood home.

4) It was thanks to his brother, Scott, that Sandler started doing stand-up at age 17. “If he hadn’t said to do it, I wouldn’t have thought it was a normal thing to do. I would have said, ‘Mom and Dad are going to get mad at me.’ But because he told me to do it, and I knew that my parents respected his brain, I was like, ‘He said to do it, so it must be O.K.,'” Sandler told Ben Stiller for Interview magazine.

For Sandler, his family’s approval and support mean everything. His dad, who died from cancer in 2003, was a huge fan of his son, taping each and every performance. Sandler wrote the song “Stan the Man” about his father the year after died, and it’s a funny, moving, and super Jewish song ode to his dad. “Stan the man was my hero” Sandler sings emotionally, “still is and always will be.” It’s also about how Stan taught his son the importance of punching anti-semites and mentions the now-closed Stage Delicatessen as Stan’s favorite restaurant.

As Jamie Lauren Kiels wrote in an excellent 2019 profile of the actor for the New York Times, “Family, above and beyond humor, is Sandler’s guiding value in the world, one that steers him away from darker work for fear of upsetting the people he loves.”

5) His first movie role was very Jewish indeed — he played a failed comedian named Shecky Moskowitz who starts working on a cruise ship in Going Overboard (1989). Watching the trailer is worth it just to glance at the super-young recent NYU graduate Sandler:

It was after his starring role in the movie that Sandler was noticed by Dennis Miller, who helped him join Saturday Night Live in 1991 at age 23.

6) In 1994, on SNL‘s “Weekend Update,” Sandler premiered “The Hanukkah Song,” now a funny holiday anthem, that celebrates all famous Jews. “When I was a kid, this time of year always made me feel a little left out, because there were so many Christmas songs and all us Jewish kids was the song ‘Dreidel, Dreidel, Dreidel.’ So I wrote a new song for Jewish kids to sing,” is how Sandler introduced the now iconic song:

7) In the 16 years that followed the release of the song, Sandler has updated “The Hanukkah Song” at least three times with new celebrity additions. Adam, feel free to hit us up if you need a comprehensive list of Jewish celebs for the next version — we’ve got it!

Sandler was fired from SNL in 1995, along with his good friend Chris Farley. While Sandler doesn’t know exactly why he was fired (it was probably due to low ratings of the 1995 season), in a 2019 guest-hosting performance on SNL, he sang in his opening monologue a song called “I Was Fired,” in which he jokingly suggested some reasons for why NBC gave him the sack: “Maybe they were sick of canteen boy/But I think they just hate the Jews.”

8) It was after his firing that Sandler began his prolific and profitable film career. Sandler starred, wrote, and produced many movies that were box office hits, if not exactly critically acclaimed. These include Billy Madison and Happy Gilmore — whose titles Sandler borrowed to form his production company, Happy Madison Productions.

9) Some of the films that helped him start his own production company include The Waterboy, and, of course, The Wedding Singer, which featured this bar mitzvah performance of Jewish mish mash song “Mazel Tov:”

10) It was on The Wedding Singer that Sandler also started his tradition of playing in romantic comedies with Drew Barrymore. And Sandler also reportedly helped Barrymore convert to Judaism before she married Will Kopelman, the father of her two daughters. (The two later divorced in 2016.)

11) It was while working on 1999’s Big Daddy that Sandler met the woman who would be his wife: Jackie, born Jacqueline Samantha Titone, an actress and model who was cast in a small role as a waitress. The two have been inseparable (and adorable) ever since.

22 years ago today we locked eyes and fell deep. Look forward to the next 22, young lady. Love you my forever girl.

The following year, Jackie converted to Judaism, and in 2003 the two got married in a Jewish ceremony — even Sandler’s dog, Meatball, wore a tux.

12) The couple has two daughters, Sadie, born in 2006, and Sunny, born in 2008, whom they’re raising Jewish. Here is a clip of Sandler, shaking the lulav with them in advance of Sukkot. You’ll also hear Sandler saying the girls may have already done this in Hebrew school:

13) Sadie had her bat mitzvah in 2019, and it was far from Adam’s basement party — the festivities featured a performance by a fellow Jewish dad, Maroon 5’s Adam Levine.

14) Like much of Sandler’s family, his daughters often star in his movies and even perform with him on stage. He even let them perform a very Jewish version of Taylor Swift’s “Lover” at a charity concert last year.

15) It was with Happy Gilmore Productions that Sandler made his most Jewish movies, including the animated Hanukkah film Eight Crazy Nights and the Israeli Mossad comedy Don’t Mess With the Zohan. Of course, we can argue about whether they are good Jewish representation, but we can’t argue with the fact that their premises are so very Jewish. And, if you go through Sandler’s long, storied, and high-grossing filmography, you will notice that almost every character Sandler has played since 1999 is Jewish.

16) Sandler is a big supporter of Israel, as he told Howard Stern in 2015: “I’m proud of being a Jew and that’s what I am. I get that from my father and mother. I’m very pro-Israel and when someone says shit about Israel, and I know people say shit about Israel and they fucking won’t play there…and when you go off on Roger Waters, I love that you do that.”

Here he is talking about his bar mitzvah with Howard Sten in 2018 and singing some Jewish prayers with him:

18) For fact chai, let’s talk about how generous Sandler is with his friends and family. I love the paragraph from the 2019 New York Times profile of Sandler, in which his friends all offer their opinions about the kind of person Sandler is: “If he goes somewhere, I’ll go with him, no matter where,” his frequent collaborator Rob Schneider says. “I would lead with, ‘Loyalty is his motto,'” Jennifer Aniston raves. “Such a menschy, sweet person,” Judd Apatow professes.

No matter what you think about Sandler’s movies or comedy, one thing is undeniable: everyone who meets him says he’s a total mensch.

With that, we will leave you with this excellent Sandler family quarantine video about all we want to do as we wait for this pandemic to be over. It’s perfect: