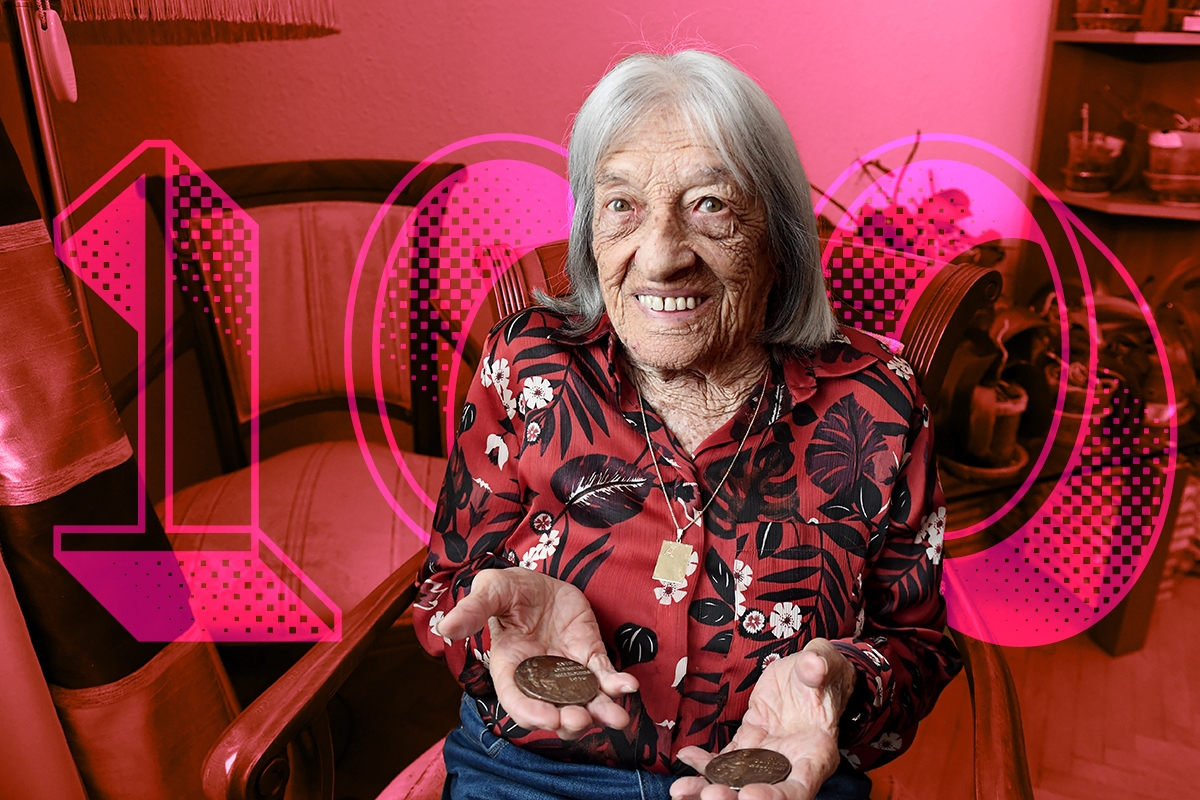 The world may seem upside down right now, but this Saturday, we got a wondrous cause for celebration: Olympic gold medalist and Holocaust survivor Agnes Keleti turned 100. She celebrated the landmark birthday at a (Covid-safe!) celebration in her native Budapest, where she’s lived since 2015, after more than a half-century away.

She is, according to the International Olympic Committee, the oldest surviving Olympic champion. She’s also the most decorated female Jewish Olympian of all time — having won 10 Olympic medals — and her story is truly awe-inspiring.

Despite the pandemic, Keleti had a respectable birthday party, thrown by the Israeli Embassy in Hungary. It was attended by local and Israeli press (who Zoomed into the event), and her son, Rafael, who does not often leave her side. Keleti was presented with a beautiful layer cake covered with chocolate shavings (which she happily sampled before getting her own slice), decorated with two alarmingly loud sparkling candles as well as three numbered candles that indicated the milestone birthday. When she was unable to blow them out, she daringly waved at them until they were extinguished. On the table, for a crowd of professional photographers, Keleti displayed her Olympic medals.

Wearing a sweater adorned with pearly beads, she was chatty, bright, and lively. At the party, Keleti, who came with her historic medals, was also presented with a copy of a new book about her life, The Queen of Gymnastics: 100 Years of Agnes Keleti. “That’s an exaggeration,” she countered humbly to the regal title.

“These 100 years felt to me like 60,” she told the reporters on the scene. And yet, her 100 years have been years of great turmoil and triumph. She was born in Budapest to a wealthy Jewish family and, as a child, she was an accomplished gymnast and cellist. By age 16, she was already Hungary’s gymnastics champion — a title she was awarded 10 times.

Keleti was slated to compete in her first Olympics in 1940, but the competition was canceled due to World War II. A year later, she was barred from her gymnastics club for not being Aryan, and her main focus turned to survival. In 1944, she married another gymnast, István Sárkány, after she heard a rumor that married women were not taken to camps. (The couple divorced in 1950.) She paid a Christian maid, Yuhasz Piroshka, to use her identity, and Keleti survived the war by adopting a rural accent and working as a furrier and a housekeeper.

Keleti says she does not remember much about the war, and that talking about its events leaves her with profound sadness. During the siege of Budapest, she recalls helping collect the bodies of dead Jews in the morning: “We dug tunnels with our bare hands to throw the bodies of the Jews inside,” she told Israel Hayom.

While Keleti and her mother and sister (who were aided by Swedish diplomat Raoul Wallenberg) survived the war, her father and other relatives were killed in Auschwitz. “I thought about how it was, what a horrible death,” she told Haaretz in 2005. “Before I left [home] I said, ‘Dad, do like me, don’t wait.’ He said, ‘I don’t have strength anymore for this, I’m too old for this.'”

Despite living through all that strife, Keleti stayed active, which helped her stay vital — and allowed her to resume her gymnastics career after the war. The losses, the fight for survival, and all that she had experienced — it didn’t stop her and, perhaps, it even drove her to follow that Olympic dream. She couldn’t participate in the 1948 London Olympics because of an injury, but in 1952, when she was 31, Keleti won her first Olympic gold medal. Four years later, at 35, she won four more gold medals at the Melbourne Olympics and was declared a World Champion.

After the Hungarian Revolution of 1956, Keleti left her native country for 65 years, and started a new chapter in life in Israel. For 34 years, she taught the Wingate Institute for Physical Education and Sports and found an ardent passion for teaching. “The joy is in that  — when you see how the gymnast begins to form a stable shape, when she gets a better report card…” she told Haaretz. “I was able to give my heart, you know, my soul, for a girl. I didn’t deal too much with the talented ones. I wanted the weak ones first, to advance the weak ones — that was the joy, that they made progress.”

In many ways, Keleti helped make artistic gymnastics in Israel what it is today. “We had never seen anyone like her,” said Chaya Halperin, who became her student at age 9. Yet for many years, Keleti was not awarded the recognition she deserved in the Jewish state, and spent much of her career in Israel fighting for resources for her beloved sport. Yet, in the past few years, that has all changed. This year, the Israeli gymnastics association announced that it would name its artistic gymnastics competition after Keleti, who in 2017 won the Israel Prize, the country’s greatest honor.

Israel marked another important chapter in her life, as it was there that she started her family. In 1959, she married Reuven (Robert) Biro, and the couple had two sons, all while Keleti was in her 40s, which, her son Rafael reminds Haaretz, was quite unusual in the 1960s. “It was very extraordinary. For her, starting a family with kids and all that, that was her victory against the Nazis.”

In an interview with Haaretz Sports last week, Keleti said that despite all her many professional feats, her biggest achievement is “starting a new life in Israel, starting her family, having two children who are successful, happy, and love what they do.”

Mazel tov, Agnes. You are truly an inspiration. May you live to be 120!