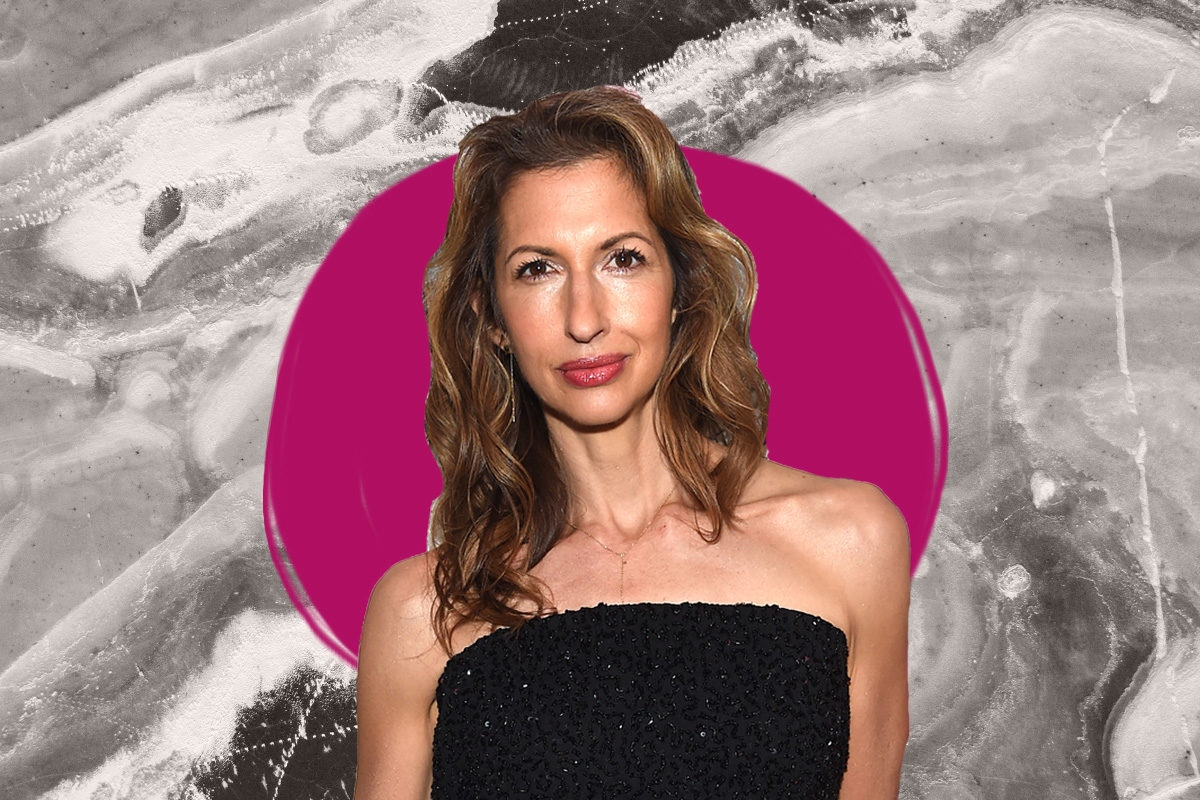 Actress and Jewish mom Alysia Reiner is best known for her role as Natalie “Fig” Figueroa on Orange Is the New Black. Her character is a corrupt, cold warden — and she couldn’t be any further from Reiner’s reality.

Do a quick Google search and you’ll find article after article praising Reiner for her social activism. An original member of Time’s Up and founder of LIVARI, an eco-friendly fashion line, the actress spreads herself quite thin. She’s sponsored two asylum-seeking families through Action Potluck. She’s launched a new campaign with Save the Food to put an end to food waste. And she just wrapped up production for an upcoming movie about a topic that hits close to home: postpartum depression.

Between traveling back and forth from her home in Harlem and Los Angeles; running a production company with her husband, David Basche; her acting career and philanthropic efforts, it’s an enigma how Reiner manages to set a Shabbat table for her 10-year-old daughter, Livia, every Friday. And yet she does!

I managed to snag some time with Reiner over the phone to talk about the season finale of OITNB and her strong Jewish identity. How did she fit me in her schedule? Like so many mamas, she’s a multitasking queen. Little to my knowledge, during our 40-minute conversation on speakerphone — yep, this badass babe doesn’t even need airpods! — Reiner not only applied makeup for her next meeting, she refolded five different shelves in her closet and hung up 10 dresses.

Reiner truly embodies being the change you want to see in this world. While simultaneously doing her chores, the Jewish mom and I talked about everything from how playing a villain empowered her to speak her truth, temple hopping (it’s a thing), and the Jewish value that keeps her young at heart.

You’re pretty much the polar opposite of your Orange is the New Black character.  What was it like to play someone so different from yourself?

It was so much fun. I think part of the joy of being an actor is you get to explore parts of yourself that you may never have explored. Fig was a woman who was, in many ways, all the things I was most afraid of being. She spoke her mind in a way that I was afraid of speaking. In my imagining of her, she wasn’t as well educated as I may have been, but she was so street smart, and so much smarter than everyone around her at all times. And she wasn’t afraid to make it clear that she thought so.

Did you experience personal growth alongside Fig’s?

Oooh, interesting. I’ll say two things about that. One is she taught me to speak up more for myself and to advocate more for what I believe in. I think she empowered me in that way. She was part of that shift that happened in my personal life, of like, wow, we have to speak up for that which we believe in! So I do feel like she empowered my voice in saying things more. I grew up a little bit of a good girl, be nice, quiet, you know, just appreciate what you have.

I did a storytelling event recently for an organization called Be Heard on the Third which is all about creating more laws around sexual harassment. And my story was about all of those little places where I was sexually harassed. And it was never rape, it was never so bad. So I would always be like, well, be a good girl, like, be quiet. And now I’m at this place of, oh, it’s deeply important that we speak up and say yeah, even the pat on the ass or inappropriate comment is not okay. I think a lot of things did that for me at this moment in time, but I would say she [Fig] is part of that shift that happened in my personal life of like, wow, we have to speak up for that which we believe in.

You’re very involved in Time’s Up and a lot of different organizations that take a strong political stance. Have you ever faced any backlash for that?

My philosophy in life is to advocate for what you believe in, and take massive action towards it, but don’t pooh pooh or criticize other people’s choices. One of my favorite quotes is from Martin Luther King Jr. and it’s on my email: “Hate is too great a burden to bear.” That’s really how I live! I’m not one to point fingers, I’m just one to make truths available to everybody. You make your own opinion. But there are truths that are inalienable — if, for example, our current administration are doing things that are illegal, then I’ll make that truth available.

You don’t point fingers, you just want to educate people with the truth. And I think education is a core pillar of Judaism. Can you tell me a little bit about how you see that as a Jewish value?

One of my most favorite things about Judaism is (it’s about God, obviously, and faith), and always asking questions. Authentic learning to me is about curiosity, and questioning, and finding your own truths, and that is, for me, a core belief of Judaism that I love so much. There’s a beautiful metaphor that God, as a parent, doesn’t say “[Do this] because I’m the father, that’s why! I’m the mother, that’s why!” As a Jew, it’s my experience that God doesn’t say that. God plays the “Oh, you’re questioning? Cool! Let’s question together! Let’s explore the answers and look at why this is true.”

My biggest goal in life is to continue not knowing. To continue asking questions, always. And I do believe it keeps you really young at heart, because I think thinking you know everything is one of the most limiting things as an artist, an actor, a parent, a friend, a part of the community.

To prevent food waste, you conduct “food raids” where you go through people’s fridges and make a meal out of their leftovers. How did this hobby start?

I really believe that no one can do everything, but everyone can do some things. And in that realm, around waste, a lot of people say, “Restaurants waste too much food.” Yes, they do. But most people throw away 40 percent of the food that they buy or purchase in some way, and that waste adds up to $214 billion a year. So I’ve been doing it for a long time. I’ll go over to a friend’s house and they’ll want to order in and I’ll be like let me look in your fridge. It’s kind of a joke among my friends. And then I had this idea of, well, it’s a long story but [I thought], what if we did that thing I do at my friends’ houses as a campaign for Save the Food? So that’s what we did, and now I’m developing it into a TV show, which is really exciting and fun.

Wow! Can’t wait to watch that. Are there any Jewish recipes that you make for family?

I make the most amazing truffle matzah ball soup with wild mushrooms. I made up that recipe and I’m kind of proud of that one. I make a decent potato latke, you know, my grandma’s recipe. I really want to learn how to make challah, and I don’t eat chicken so I never learned how to make a proper roast chicken. But my husband, people say, makes the most incredible brisket on the planet.

In an article you wrote for Kveller way back when, you described yourself as culturally Jewish. What does that mean to you?

I grew up Jewish, but my parents weren’t super Jewish. I didn’t get bat mitzvahed and my parents were not spiritual at all. I would say [now] I’m almost more Jewish than I ever have been, way more Jewish than I grew up being. We do Shabbat every Friday night, and we go to temple for the High Holy Days. We love to try all different temples, we’re not tied to one. This year we went to Lab Shul, which we love. My daughter learns Hebrew from my cousins, and Liv loves it, [she] loves learning from [my cousin]. It’s a real joy. The way we envision it, Liv will get bat mitzvahed in Israel in a very small service, [officiated by] the rabbi who married us, [who] is actually a dear friend who I met when I was in acting school and she was in rabbinical school.

Wow! Look at you both now! You’re also starting to get involved with JewBelong, a non-profit that wants to welcome “disengaged Jews.”

I love what [JewBelong] is doing, and I’m like, how can I help? For me, life has to be about play, and how we can play together to create more awareness and joy around our learning and growing as Jews, and as humans. I think speaking to this moment as Jews, it’s been my experience that we’re good at speaking up when things are bad. My daughter goes to Bank Street School for Children, which I love very much, and from the time she was 3 she learned that in every situation there’s a mistake-maker, an ouch-taker, and a bystander. If you’re a bystander, you’re always almost as bad as a mistake. And I think we are in a moment where it’s really important that we not be bystanders, and we express when we feel, this is inappropriate.