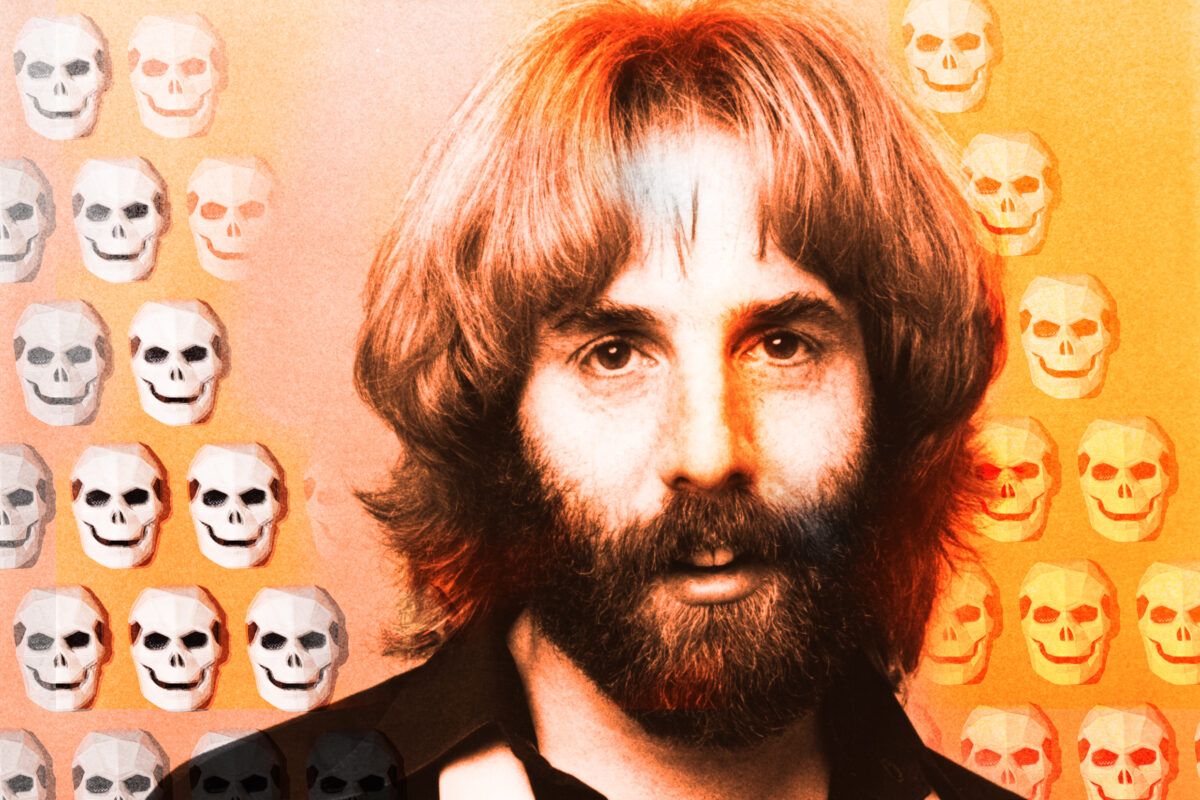 It’s Halloween season, and if you’ve spent any time on the internet the last few years, you may know that, for a few years now, the song of the season has been “Spooky Scary Skeletons.” The upbeat song — about a band of skeletons that “sends shivers down your spine” — is indeed spooky, as the title of the song suggests. But it is also catchy, delightful, and very viral — and written by beloved musician and dad Andrew Gold, for his Jewish daughters.

Though the song was released in 1996, the viral-ness of “Spooky Scary Skeletons” dates to 2010, when one YouTuber matched the tune with a 1929 Disney cartoon of skeletons cartoon on YouTube, to the world’s delight. (The original video was deleted from YouTube for copyright reasons, but a re-uploaded version has over 20 million views.) Then, a remix was juxtaposed with this video of a dancing man in a pumpkin head and black garb became so iconic it even earned the performer an “America’s Got Talent audition.”  Since then, videos of this song and its remixes have garnered tens of millions of views.

More recently, the remix of the song migrated to TikTok — where it has inspired a fast-pasted, ultra-limber dance that’s been featured in more than 5 million videos.

All this silly, Halloween-appropriate fun is thanks to Gold, who created what is arguably the best Halloween album ever made: “Halloween Howls.” Gold was an incredibly prolific musician who died in 2011 at age 59 (his legacy is currently managed by his widow, Leslie Kogan Gold). “Halloween Howls” was his only children album, and it includes 12 amazing tracks, including three covers of Halloween classics: “Monster Mash,” “Ghostbusters” and “The Addams Family” theme. Gold’s renditions of these songs are all so delightful, and simply pale facsimiles of the classics that we sometimes get with holiday covers.

But it’s Gold’s original songs that really shine on the album — they’re playful, creepy and infectious. There are narrations, delightful sound effects that are both classic and inventive (especially in “Creature from the Tub”), and a good balance of scary and funny — “You must excuse those ketchup stains/ we ate someone last night,” Gold sings in “In Our Haunted House.” The songs cover all the classic Halloween trappings: parties, trick-or-treating,  jack-o-lanterns and haunted houses.

The album also features incredible vocals from guest artists like Linda Ronstadt and David Cassidy, as well as two very special Jewish stars — Gold’s daughters, Emily and Victoria. You can hear them singing “witches, witches, witches on the broom” in the song “Witches, Witches, Witches,” which is one of my personal favorites.

Gold says he wrote the album because there was a dearth of Halloween children’s music: “Each holiday has a mood and usually has music to go with it,” he wrote in the album’s liner notes. “However, it’s been very hard to find any tapes or CDs of Halloween music. In fact, there’s mostly just scary sound effects available and very few songs. So, I fixed that.”

If you’ve heard of Gold before, it’s probably from his 1976 hit “Lonely Boy,” as well as “Thank You For Being A Friend,” which is, of course, the iconic, immortal, unforgettable “Golden Girls” theme. (A gospel version of the song went viral a few years ago, and it is honestly one of my favorite videos in the world). He also wrote and performed “Final Frontier,” the theme to the very Jewish 1990s sitcom “Mad About You.”

Just more highlights from Gold’s impressive career: He collaborated with the likes of Cher, Joni Mitchell and Celine Dion. He released 11 studio albums. He was friends with Freddy Mercury, who sang (uncredited) vocals on his UK hit “Never Let Her Slip Away” (the song is actually about Jewish actress and original “Saturday Night Live SNL cast member Laraine Newman, whom Gold was dating at the time). He was in the band Wax with 10cc’s Graham Gouldman (another Jewish musician!). Gold was obscenely prolific — it’s hard to fathom how much more music he could have gifted us if he was still with us.

It’s not surprising that Gold became such a musical icon — his parents made him destined for musical greatness. His mother, Marni Nixon, was one of the greatest “ghost singers” in history — doing the vocals for Natalie Wood in “West Side Story” and for Audrey Hepburn in “My Fair Lady.” She starred in “The Sound of Music” as Sister Sophia and, if you and your kids are fans of “Mulan,” you’ve heard her singing voice as Grandma Fa. His father, Ernest Gold, born Ernst Goldner in Austria, immigrated to American after the Anschluss. Ernest, who had two Jewish grandparents, won an Academy Award for composing the soundtrack to “Exodus.”

Gold was not raised Jewish, but his three daughters, Emily, Victoria and Olivia, whose mother, Vanessa, is Jewish, were. According to a video Victoria, who is a wedding photographer, shared on TikTok, Gold met their mother, who is British, in London, and the couple eventually divorced but co-parented their children. His other two daughters are continuing the Gold family musical legacy: Both Emily and Olivia are musicians. They even recorded a cover of one of their dad’s songs, “Firefly,” together.

Just how do Gold’s daughters feel about their dad’s posthumous reign as the king of viral Halloween music? Well, earlier this month, daughter Victoria shared a (viral) TikTok with the song, which she captioned, “That time of the year where my late dad’s song is all over the internet from a Halloween album he wrote for my sisters and me when we were kids.”

She later posted a series of videos reflecting on her dad and his career, saying, “He was the funniest, best dad. Obviously every dad, every parent has issues… but I’m so happy the last thing I said to him was ‘I love you’ on the phone, and the last time I saw him I gave him a hug… I’m so happy that we have all this music and that you guys love it, especially this time of year with ‘Halloween Howls,’ because it means a lot.”

It’s clear that Gold was very loved by his daughters, and with this album, he has given us a gift — something to help us connect with our kids during this Halloween season.

Thank you, Andrew Gold for blessing us with your incredible music.