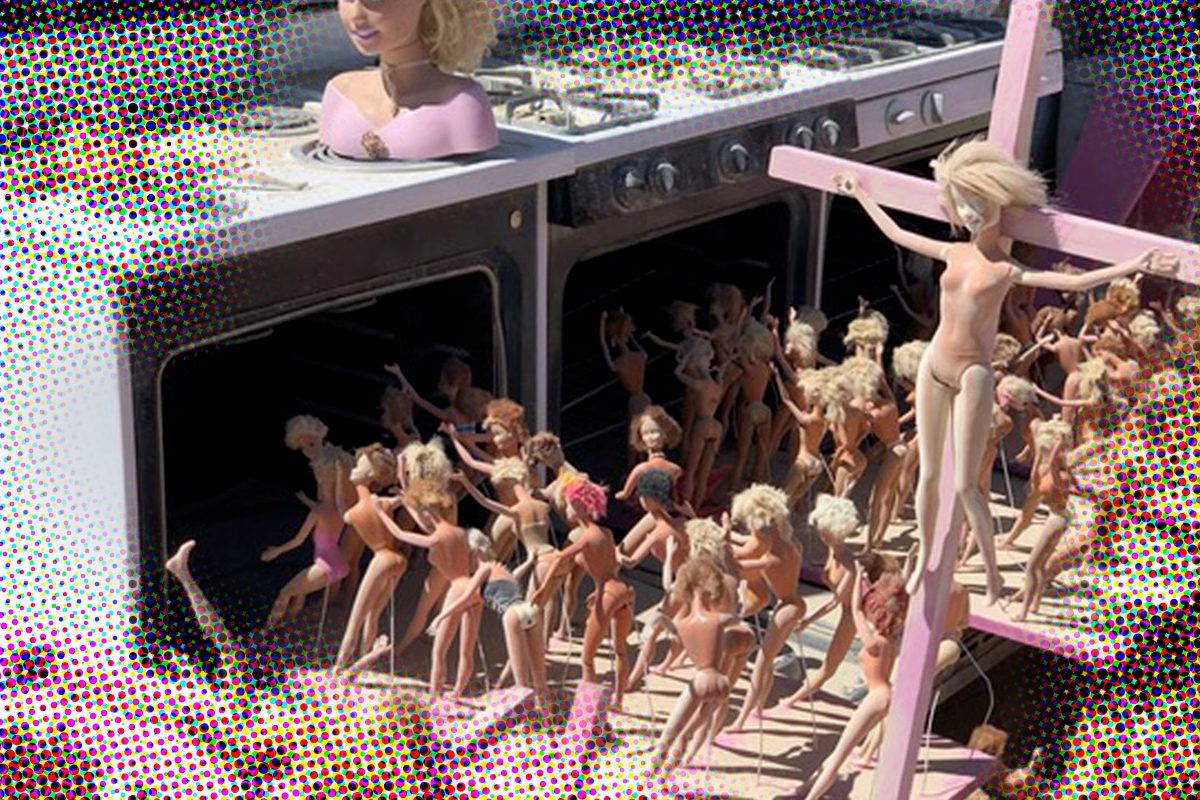 Honestly, we’re going to need some help picking our jaw off the floor for this one. Apparently, at Burning Man — the anything-goes desert party that draws some 70,000 revelers to Nevada’s Black Rock Desert each year — there was a Holocaust-themed “death camp” that featured mutilated Barbies.

Not only that, but the “Barbie Death Camp,” as it is known, has been part of the hedonistic desert festival for some 20 (!) years. However, according to its Jewish (yup!) founder, there’s never been serious complaints against the macabre display — until this year.

At this year’s festival, which ran Aug. 25 through Sept. 4, some Burners were so enraged by the installation — which includes a poster reading, “Arbeit macht plastique frei,” a riff off the gate of Auschwitz which infamously says, “Work makes you free”  — that a physical altercation took place. Plus, some attendees lodged complaints to the Anti-Defamation League, who are currently investigating the matter.

“We have received a number of complaints,” Seth Brysk, the ADL’s regional director, told J., The Jewish News of Northern California. “Certainly individuals have a right to free expression. But using that free expression to trivialize the Holocaust for the sake of political, social, or artistic ends is still deeply offensive and inappropriate.”

In his piece for J., writer Gabe Stutman interviews James Jacoby, the 65-year-old man who created the Barbie Death Camp, which involves a display of naked and mutilated barbies walking into literal ovens. Eeeeek.

Jacoby said that the camp originally started out small, “just 11 miserable Barbies stuffed into an Easy-Bake Oven.” The installation has clearly grown since then, and includes several ovens and a sign that reads “Purveyor of fine lampshades and soap products since 1939.”

Since 2018’s installment of Burning Man, there have been two synagogue shootings, and Jews in this country are facing a rise in anti-Semitism. In that context, it’s understandable why such “art” is seen as objectionable.

But one Barbie Death Camp organizer, who goes by the name Felony, had a different explanation: “As Burning Man becomes more of a party and less of a cultural experiment, we see less tolerance,” he told J.

Yes, Burning Man is supposed to be subversive; its whole point is to critique materialism and capitalism. Aside from tickets to the event, which will set you back $425 — and that’s not including camp fees and transportation costs to the middle of the desert — the “economy” at Black Rock City is virtually nonexistent, as everything is shared or bartered. But at a time in which celebs like Paris Hilton post on social media directly from Burning Man, or DJ/producer Diplo is personally sent chicken sandwiches from a Popeye’s-branded private jet, maybe the whole thing is muddled at the point?

But, at the same time, Barbie was literally invented by a Jewish woman, and the use of her creation in such a gruesome setting is sure to raise some eyebrows, at the very least.

According to Byrsk, the offensive display “tarnishes the memories of those who died, including the 6 million Jews and 5 million other.”

“We certainly don’t want to trigger anybody,” Jacoby tells J. “But Burning Man is not a safe space. It’s not Yale University. You don’t get to run and hide from something you don’t like. There’s 1,100 theme camps. If you don’t like ours, go to another one.”

What do you think, Kvellers?