Where to Eat in Israel With Kids 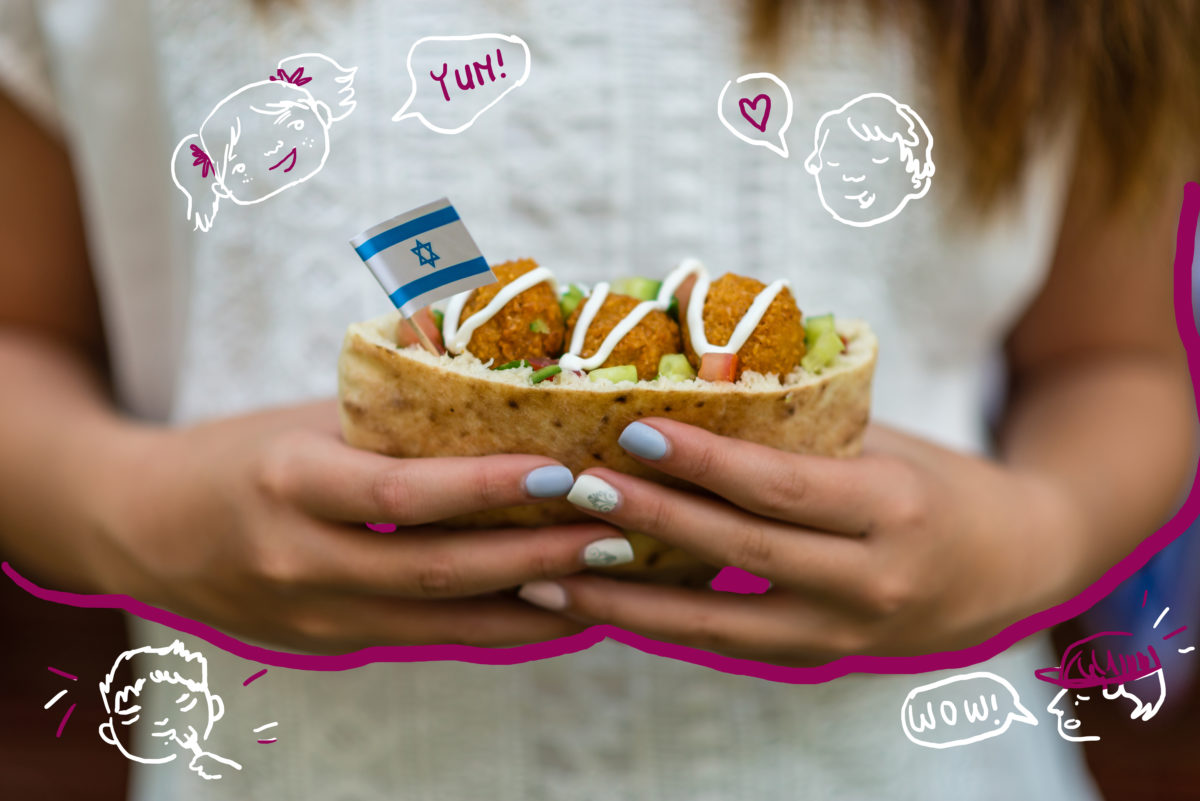 If you’re looking to keep your kids happy and fed while enjoying the diverse and delicious bounty Israeli restaurants have to offer, you’re in luck! Eating with kids in Israel is so, so easy. The majority of restaurants — from upscale ones like the Brasserie in Tel Aviv to the simplest coffee shops — have a kids menu.

Plus, for those of you who keep Kosher, the world is basically your family’s oyster. Yes, in Israel, there are even kosher McDonald’s.

Here are our top tips when it comes to eating out with kids.

Before you dine with kids in Israel, some things to keep in mind

Israeli food isn’t what Americans think of as Jewish food

You’re not likely to find a good deli sandwich, a good bagel (Jerusalem bagels are delicious, but they have nothing to do with what New Yorkers know as bagels,) or a good kugel (though the latter can be found at kosher eateries in Bnei Brak) at most  local eateries. Israeli fare is more Middle Eastern — think chopped salad, hummus, pita filled with grilled meats, falafel or veggies.

But the Israeli culinary scene is pretty amazing

You can find so many different cuisines in Israel, especially in Tel Aviv! And the choices are just expanding and getting better, from Thai food to Indian food, to beautiful sushi and mouthwatering Italian fare.

There is no mac and cheese

This super popular American  dish just isn’t a staple in Israel! Don’t expect people to know what you’re talking about if you ask for it in a restaurant or at a grocery store. Pasta in plain tomato sauce is a thing though, and pretty common at Israeli restaurants.

While kids’ menus will sometimes offer “grilled cheese,” what the dish they’re about to serve you is really “toast gvina,” cheese toast — a toast made in a panini press with gvina tzehuba, which literally means “yellow cheese” and has a very different taste from that of American cheese or cheddar. So if your kids are picky, they may not be a fan. Or this may completely rock their world and become a new favorite. It’s worth a try!

As in the U.K., in Israel, fries are called chips. We figure this may be important information.

You may be in Israel, but don’t assume every restaurant is kosher

Even if the menu looks safe, it’s worth asking about certification and ingredients if you’re observant.

Where to eat with kids in Israel

The shuk (the market)

Open markets are in all the central cities in Israel. They’re a great place to get enmeshed with the local culture and to try new foods. Jerusalem and Tel Aviv both have great shuks and there will often be kosher eateries and stands in the actual market. There are also more upscale food markets like Sarona, Shuk Tzafon, and the food market at the Tel Aviv port!

Israeli coffee shop chains are much friendlier and more civilized than Starbucks! Some even have table service. And many have delicious kids’ menus that almost always come with a healthy side of veggies. But arguably one of the best things about Israeli cafes is the Israeli breakfast, which usually means eggs plus a variety of salads, sides, bread, and other goodies (every coffee shop has a slightly different iteration). It makes a perfect, shareable family meal.

While many of the bigger coffee shop chains like Aroma, Arcaffe, and Hillel have dishes that are many kids would find delicious, these following chains do have a menu especially for the little ones:

Cafe Greg. which started in Haifa and now has location all over the country, offers a myriad of kids meals. They include little schnitzels, pizza, cheese toast, pasta, or kids’ breakfast with a side of veggies! They even have a baby meal, which includes rice, purees and other attractive baby options.  Plus, some Greg Cafes have a play space on site! It’s heaven! And don’t worry, Cafe Greg has plenty of options for you, too, from breakfasts to salads to warm meals,

If you’re looking for a health kick, the Cafe Louise chain, a small (and not kosher) franchise with locations in Tel Aviv, Rehovot, and Haifa, also has delicious kids meal.  Made from fresh and nutritious ingredients, the meals come with a healthy salad and a freshly squeezed juice, as well as a free dessert and a gift.

Cafe Landwer, which just opened its first location in the U.S., also has kids’ meals that include a special gift! They have all the usual suspects: Israeli breakfast, schnitzel, pizza, pasta, hamburgers, and more. It also includes decadent chocolate milk with whipped cream, marshmallows, and candy. Yum.

The CafeCafe  kids’ meals also include a drink, dessert, and a surprise. They offer one of the most popular Israeli kids’ dishes: corn schnitzel! That’s right, don’t knock it till you’ve tried it!

Cup ‘O’ Joe (yes, it’s an Israeli chain!) only serve four different kinds of savory kid’s meals, but one of them is a pizza on a bagel. And while Israeli bagels are very different from the American staple (think more fluffy and coated with sesame cheese), we always have a warm place in our heart for a pizza bagel.