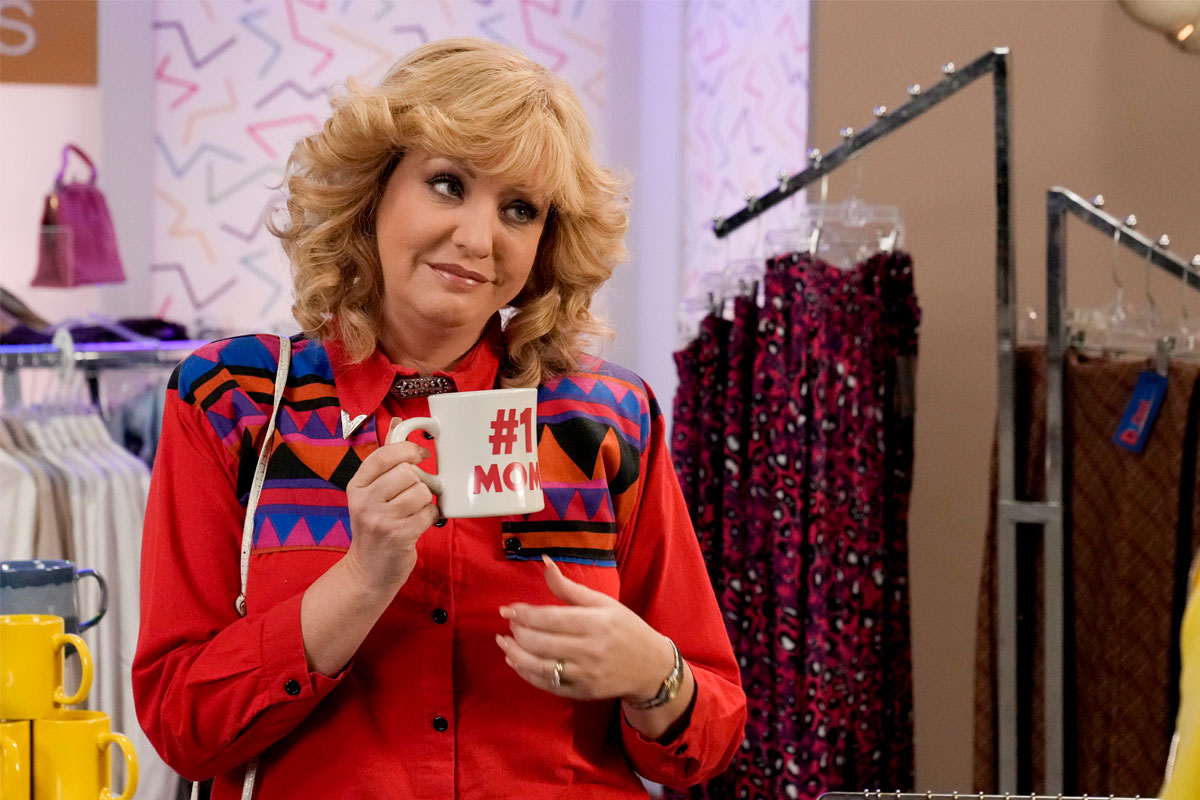 My Jewish parenting twin soul is Beverly Goldberg from the sitcom “The Goldbergs.” The show premiered in 2013 and my husband and I were hooked from the opening scene. Jewish writer Adam Goldberg introduces the family matriarch, Beverly Goldberg, (loosely based on his own mom) as a smother with big hair and green eyeshadow who loves jazzercise, raising her kids and “driving us all crazy” with her aggressively unconditional love. The show is set in the ‘80s, and many who know me well would say I am too, in my very soul, set in the ‘80s. My husband, who loves me deeply in all of my Flashdancing, Bangles-singing, leg-warmer-wearing glory, turned slowly and smiled at me. We both knew. Beverly was mishpocha.

Adam views Beverly’s fashion as an expression of her brashness, whereby she often misses social cues due to a laser-focused worldview. Though Beverly and Adam share a bond no one can approximate, there are things only other Jewish mamas of Beverly’s sisterhood can truly understand: angora puff sleeve sweaters, multicolor nylon running suits and fanny packs, for example. Beverly and I are also proud owners of T-shirts with our kids’ faces on them: What better way to invite opportunities to kvell?

It’s not just Beverly’s joyful 80s fashion that captivates me. I also recognize my own 2022 joy: A middle-aged mom in the happiest time of her life, shedding the self-consciousness of youth and showing up for all moments with her whole self.

There are moment-by-moment opportunities to shep naches when you’re a Beverly like me raising kids like these. I’d go to a school dance with any of my delicious babies if they asked. I’ll wipe the schmutz from your face no matter who’s standing there. I’ve had moments when I’ve looked at each of my children and thought, “You’re welcome, world!”

But there’s a moment in “Graduation Day” (season 4, episode 24) when Beverly really speaks my language: “You should know, no matter where you are or what you’re doing, I will always fight for you in an embarrassing and inappropriate way.” She is a warrior, like me.

In the spirit of a sitcom, Goldberg often explores Beverly’s warrior moments at their most exaggerated. In middle school, for instance, Adam auditions for the school play, “Jesus Christ Superstar.” Beverly convinces him he should play no one other than Jesus; his singing, she says, is star quality. She has even recorded him singing in the shower and sent an audition tape to “Star Search,” though Ed McMahon has rudely not yet responded. When the theater teacher doesn’t agree with Beverly’s assessment of her delicious baby’s talent, Beverly stages her own musical starring Adam, involving complex choreography and roller skates. In the end, this “turd on wheels” falls apart when Adam becomes too invested in his own stardom and Beverly realizes she got carried away. Adam, too, realizes he’s gone too far if even his mother, “the woman who loves me too much,” tells him to reign it in.

While Beverly allows no one to disrespect her children — not teachers, police or the line of traffic stopped for miles while her teen learns to drive —  she’s no one’s fool. Beverly saves her babies from themselves through detailed rules and strong opinions regarding curfews, candy and personal hygiene — sometimes with illustrative presentation materials.

To ignore her wisdom is to plan your own funeral. Take middle child Barry, for example, who found himself literally lying face down in a ditch after ignoring Beverly Goldberg. Punishments, however, are rare and typically involve fewer servings of Bev’s famous shrimp parm and her famous line, “I have failed as a mother.” Although I have never (seriously) uttered these words, I do tell my children that their behavior and choices in the world reflect on me, our family and the Jewish community.

While Beverly and I are joyful versions of the Jewish mother archetype, an old and harmful stereotype clearly rattles around in the bones of our shared example. The neurotic, overbearing Jewish mother who invests in others for her own ego, using guilt and shame in place of intimacy. There’s Ida Morgenstern in the 1970s sitcom “Rhoda,” who weaponizes guilt trips and, more recently, Louise Schmidt on “New Girl” and Naomi Bunch on “Crazy Ex-Girlfriend,” whose abusive, critical behaviors are presented as the origins of their children’s difficulties. It’s hard not to see general misogyny in these tropes. Worse still is the embedded antisemitism whereby unbounded love is redefined as soullessness.

Adina Kay-Gross, Caral Naumberg and Judith Rosenbaum write of the enduring stereotype of Jewish mothers, which “sits, untouched, unexamined, unquestioned. To date, no one has turned their critical focus to the enduring caricature and how its lingering presence impacts actual Jewish mothers today.”

I’ve studied parenting and child development for 20 years. Not once have I encountered a study in the psychological sciences that sought to understand Jewish parenting. Science can be a powerful way to confront the kind of violence that begins with myth and narrative, so this gap is both telling and impactful. As a mother, I am simply struck by this stereotype’s permanence, and how it sits like a cloud, preventing even me, shameless as I am, from complete, unbounded confidence in my own parenting.

Without specific attention to religious identity, however, parenting science has long been clear that healthy children need love in unending measure to thrive. We are navigating a fraught world as Jewish mother warriors. Perhaps we know our greatest defense is to raise children so overflowing with our love that they are not only sustained, but carry that love forward and work to make this world better. Thus is the power of the comically intense but authentically unconditional love Beverly and I pour into our children. When all else fails, Beverly knows that even the deepest cynicism can be lifted with a whole family “Hot Lunch Jam,” and this joy, too, matters, in approaching an uncertain future.

As I put one foot in front of the other in this epic work raising Jewish children, I can only follow Beverly Goldberg’s axiom: mandatory hugs at the door.