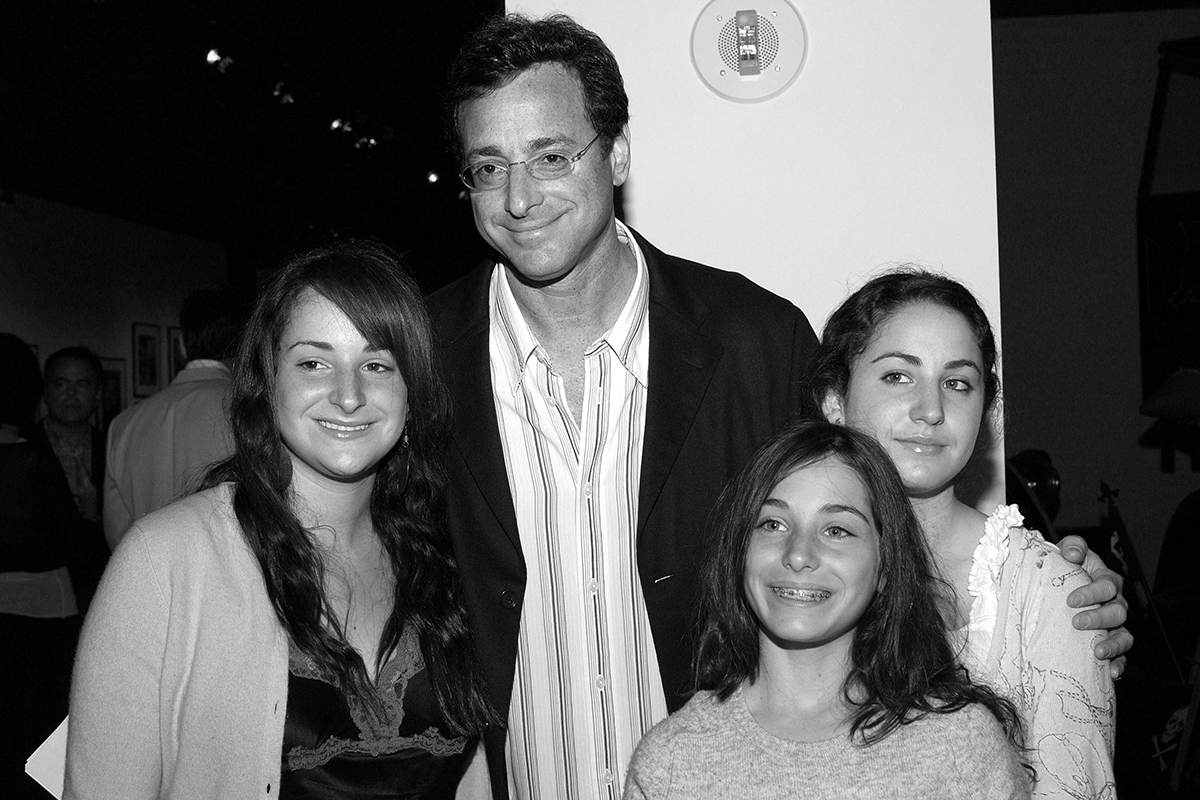 Editor’s note: This piece was originally published in January of 2021. We are republishing it today on the one year anniversary of Bob Saget’s passing. May his memory be a blessing.

Jewish actor Bob Saget’s death at age 65 has hit a lot of us hard. Maybe it’s because, for most millennials, Saget, who starred as widowed father of three Danny Tanner in “Full House,” felt a bit like our surrogate TV dad.

Tanner, who co-parented his three daughters with his brother-in-law Uncle Jesse and his best friend Joey in that beautiful San Francisco townhouse, was the prototypical ’90s TV dad, not just in the U.S. but across the world, where the show continues to be syndicated. He was straight-laced, cleaning-obsessed, and more than anything, a totally devoted dad to his three daughters, D.J., Stephanie and Michelle. Also, as an adult now, I can look back and admit he was… kind of dreamy? In the ’90s, Danny Tanner was very much #DadGoals.

Saget later became the voice of another iconic TV dad, serving as future Ted Mosby (played by Jewish actor Josh Radnor) in “How I Met Your Mother,” and also hosted “America’s Funniest Home Videos” from 1990-1997.

But Saget wasn’t just a TV dad. In real life, he was an amazing Jewish father of three to Aubrey, Lara and Jennifer, who he had with his first wife, Sheri Kramer. Saget later married food influencer and model Kelly Rizzo in 2018.

And in real life, it seems he was just as loving — and beloved — by his family. He called his daughters “the best people I know,” though Aubrey, his youngest, was not always happy about her father being the nation’s TV dad: “She loved the show but she was very little, my oldest daughter is one year younger than Ashley and Mary-Kate… literally I would work on set all day holding little kids and she would like, smell them on me and think I was cheating.”

Saget is known for both embodying quintessential vanilla dadness and telling the dirtiest, most risque jokes as a stand-up comic. It was Saget’s own Jewish dad who inspired him to become the comic that he was. His dad, who ran a supermarket, told bawdy jokes to his son long before he was old enough to understand them, and Saget believed his father had the potential to be a successful comic himself. But more than that, Saget said his dad, Benjamin, who died in 2007 of congestive heart failure, taught him that nothing was more important than being a mensch.

“My dad was a very sweet kind man, and that’s what impressed me the most. Through all the darkness and through all the dirty stuff I was raised listening to, the kindness was the most important part. That’s… the duality of what my comedy [is],” he told Laurence O’Donnel in 2014.

As for the matter-of-factness and dryness embodied by some of his characters, Saget inherited that from his mom, Dolly, who served as the family straight man.

Saget’s childhood was a very Jewish one. He grew up in Norfolk, Virginia, where he witnessed segregation and racism and also experience antisemitism, recently telling a podcast that “people would throw rocks at my head and call me a Jew.” But while he was attending Hebrew school, he was more concerned with making connections than taking in the Torah. “In my Hebrew school training, I would spend more time trying to impress the girls in the class. I remember the rabbi taking me up to his office and saying ‘Saget, you’re not an entertainer; you have to stop doing this.’ I couldn’t stop.”

His childhood was also saturated with Jewish food, from gefilte fish (his favorite was made with a combination of carp, pike and whitefish) to his bubbe’s delicious mandelbread cookies and stuffed cabbage.

While he didn’t play a Jewish character on “Full House,” he often acknowledged his Judaism in his stand-up, joking about circumcision and more. “I got [my mother] the ‘First Alert’… she hits the button and it calls the first person that I want there, which is the caterer… that’s specifically a Jewish person kind of joke,” he said in a 2013 comedy special.

Saget also experienced his fair share of loss. His two sisters died young; his sister Andi died of a brain aneurysm, and his sister Gay died of systemic scleroderma. Earlier in the pandemic, Saget posted a picture of him and Andi from his bar mitzvah, holding an adorned yarmulke and tallis, lovingly looking at each other.

“This is from my Bar Mitzvah. You can see in this picture how much we loved each other. She was an angel and I miss her every day,” Saget wrote. “I mention her here because everyone seems to be going through some kind of loss right now.”

“Sending healing thoughts to everyone,” he added.

Saget often kvelled about his three daughters: “I had no idea I was a good Dad until my three daughters became the strong beautiful young women they’ve become. Although when this was taken when they were 4, 7, and 9, I was hoping I’d be a good dad, but I was only learning. So damn proud of them,” he wrote on another social media post back in 2020.

“They are the light of my life. I am a fortunate man in that all three of my daughters are exceptional. Very high beings, very smart people, very wonderful and very brilliant, very beautiful. They’re all artists,” Saget told People in 2016.

In true Jewish dad style, Saget commented on his daughters’ Instagram posts often, lauding Aubrey’s paintings and Lara’s sculptures and artwork with “Beautiful” and variations of “Love it!!!” and assortments of heart emojis, as well as the occasional dad joke. In one piece called “Asphalt,” he commented, “who’s fault?” but added a red heart emoji for good measure. What a dad.

Saget had recently brought a chockfull of dad energy to TikTok, where he shared dad jokes and funny lip synchs to Dr. Phil, in which he admitted that, unlike the TV personality, he doesn’t mind people commenting “daddy” on his posts (also, let’s face it, CleanTok has Danny Tanner energy).

Saget was also a parental figure to everyone he worked for, including, of course, Mary-Kate and Ashley Olsen, who were babies when they started sharing the role of Michelle Tanner on “Full House” (Saget recalls even occasionally changing their diapers on set). He protected them in a very fatherly way when people were upset about the twins not joining the 2019 “Full House” reboot.

“People, get over it,” he said. “The Olsens are sweet girls, they should do what they want to do with their lives… they’re amazing artists and they’re just really, really talented and people should do what they want to do… I love them. I don’t think that show business or a project is what you have to do even though the fans really want it. You gotta live for yourself.” The love was mutual; the Olsens released a statement today sharing that he was “the most loving, compassionate and generous man.”

Along with touching posts from Candace Cameron Bure, who played D.J. Tanner, and Jodie Sweetin who played Stephanie Tanner, Jewish actress Kat Dennings, who played Saget’s daughter in the short-lived show “Raising Dad,” also remembered him fondly as a protective parental figure: “Bob Saget was the best. So kind. I was his TV daughter for one season and he was generous, protective, caring and wonderful. He talked about his kids constantly,” she wrote on Instagram.

It was parenting his daughters that primed Saget to be a sort of universal parent figure, as he wrote in his 2014 book “Dirty Daddy:”

“I’ve put my entire soul into raising my own daughters and will continue to because it’s the most rewarding part of my life but they’ve also inspired me and taught me how to embrace and step up to that honored role of being a father in general. I get college audiences of thousands of people looking at me apparently as the dad they wished they had, and yeah it’s also for about an hour and about as superficial a connection as can exist compared to actual real-life parenting but I still take it very seriously, that’s not the comedian part of me using the word seriously.”

On her Instagram stories, Aubrey Saget shared a screenshot of the last text her dad sent her, right before he went to his final stand-up performance: “Thank u. Love u,” the message read. “Showtime!”

Our hearts go out to everyone in the Saget family.

Thank you for being our dad, Bob Saget. You were a great one, and your memory will always be for a blessing, everywhere we look.