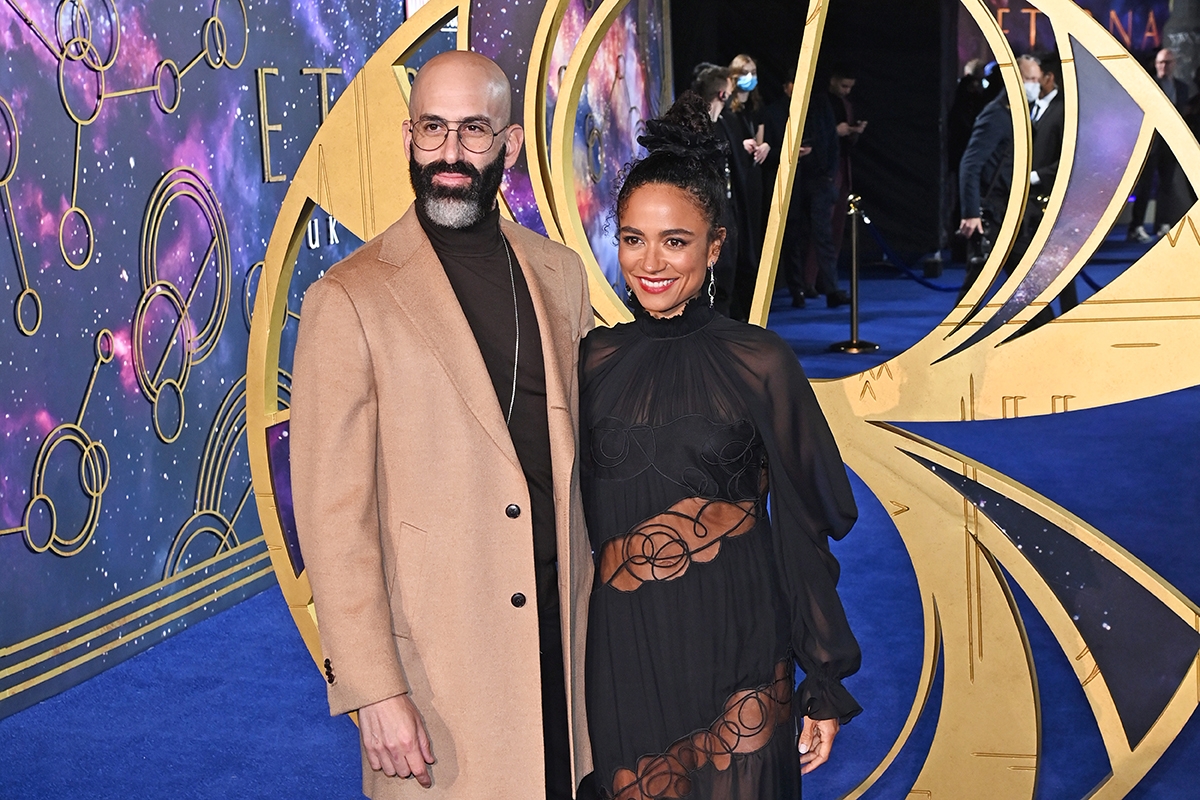 Despite some scathing reviews, Marvel’s newest box office smash, “Eternals,” directed by Oscar-winner Chloe Zhao (“Nomadland”), is a win for superhero representation. The movie, which opened on November 5, and tells the story of a race of alien superheroes who band together to fight their evil counterparts, the Deviants, features the first gay Marvel superhero, Brian Tyree Henry as Phastos, and the first deaf superhero — Makkari, played by Lauren Ridloff of “The Walking Dead” fame.

Having a movie with a deaf character who interacts with others in sign language means you need an ASL (American Sign Language) consultant, and in this case, “Eternals” really hit the jackpot. They hired an amazing Jewish dad — Douglas Ridloff — who is, yes, also Lauren’s husband. The couple has two children.

Douglas is the founder of ASL Sam, a monthly performance event in New York City, as well as a longtime ASL expert — he worked on “The Quiet Place,” “The Quiet Place 2,” as well as the recent TV delight that is “Only Murders in the Building.”

Douglas worked with the “Eternals” cast, helping to teach them sign language, and also helping to come up with some original signs for the movie’s many characters. Kumail Nanjiani, who plays Kingo in the film, said that, “Lauren and Douglas taught us a lot… Both of them were very patient with us, especially when the dialogue was rewritten the night before the next day of filming.” He added, “I’d get nervous because I wanted to do a good job and be natural on camera. So I would text Douglas and he would send me videos of himself signing each word. The next day, I’d come on to set having practiced what was in each video, and he and Lauren would go over them again and again to really get a handle on it. That helped me to just do it and not overthink it. Learning ASL was definitely one of the most satisfying things I did on ‘Eternals.'”

The Ridloffs also used this as an opportunity for some really cute odes to their family.

“We had worked in collaboration together, my husband and I coming up with name signs for each of the characters in the movie, and I do have to let you know that there are some easter eggs. For example, Kingo, it’s based on his powers… but it also happened to be the name sign of my youngest son, Wyatt,” Lauren told Fandango in an interview about the film.

“And then [the sign for] Makkari, it does represent speed, that she zooms, and it’s really close to the ear,” Lauren said. “We picked that because I don’t know if you can tell in the movie, but Makkari tends to wear a lot of earrings… so we based that from there and in real life that happened to be the name sign for my husband.” So sweet!

On October 28, Douglas posted a video of the entire cast of the movie signing “Eternals” to his Instagram. “The cast signs Eternals! 💥💥 this is one example of how an ASL consultant supports a production,” he wrote.

Douglas is Jewish, and his Judaism is often featured in his work. He has created a series of ASL videos for the Jewish Museum — including this incredible retelling of the Hanukkah story — and has done deaf poetry slams in Israel. He also attended a mass bar and bat mitzvah for hearing-impaired kids at the Western Wall.

He told an Israeli crowd that his own bar mitzvah was a struggle: “I sat there and they were using Hebrew, while I didn’t understand anything,” Douglas said. “My mother found a hearing rabbi who knew some sign language but he was not skilled,” he related. “I was able to somewhat communicate and learn a little bit of Hebrew, but it was just memorization,” he said.

The Ridloffs are raising their two boys with Jewish traditions. This Rosh Hashanah, Lauren posted an image of a round challah she and her boys made together, writing:

“My boys and I baked this round challah and waited (kind of patiently) for the 30-minute resting period to pass after taking the bread out of the oven. I never knew my oldest could wash and dry a bread knife with that much devotion. The challah was delicious and warm and sweet. That is what I wish for this year — collaboration, patience and devotion. Then perhaps we’ll have a year just as delicious and warm and sweet. L’shana tova, family and friends.”

It’s such a lovely holiday wish. And one that bore fruit! The couple’s collaboration and devotion to shining the spotlight on ASL in “Eternals” is paying off — since the movie came out, there has been a rise in people’s interest in learning sign language.