12 Facts About Ady Barkan, the Healthcare Activist and Jewish Dad 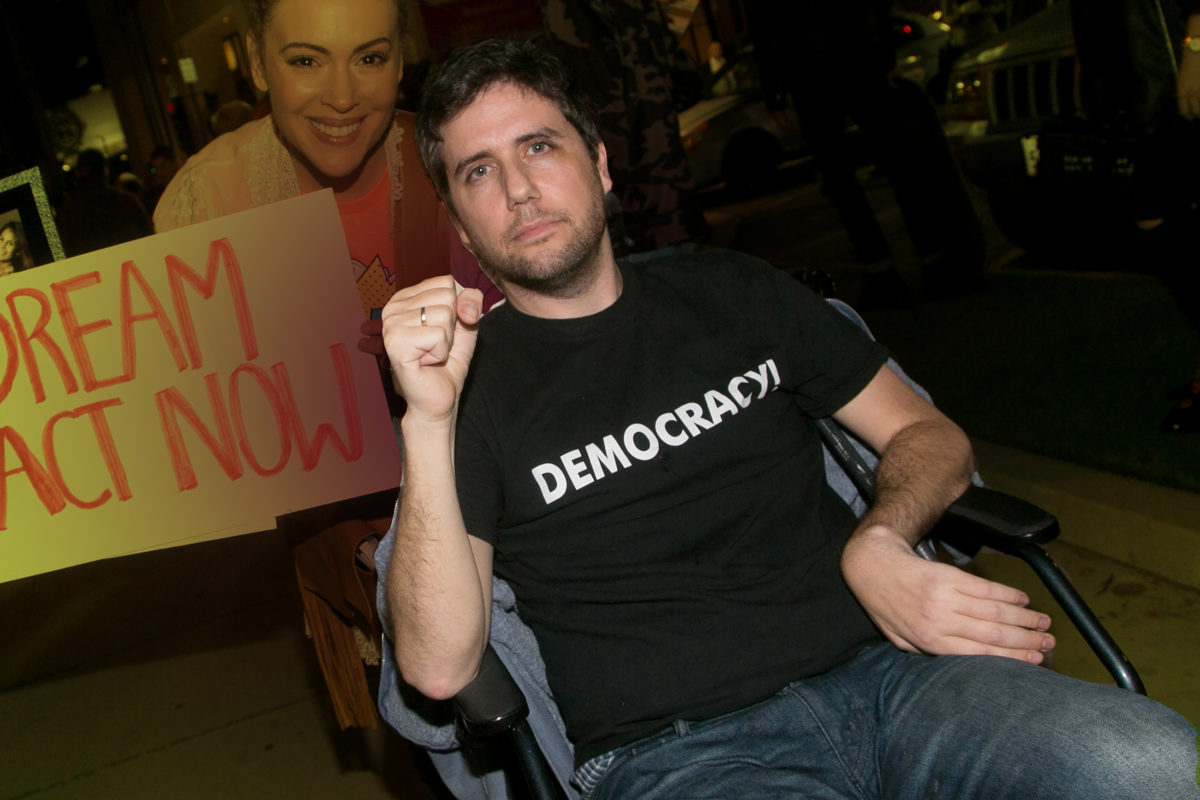 In July 2019, during the democratic debate, someone with the very Israeli name of Ady Barkan got a devastatingly moving shout-out from Elizabeth Warren at the second Democratic presidential candidate debate on CNN.

Thank you, @ewarren. You are right: this health care system is unconscionable. My family needed #MedicareForAll yesterday. pic.twitter.com/vrXPbD6zmf

“I’d like to finish talking about Ady, the guy who has ALS, ” Warren told the crowd in Detroit, after being previously interrupted. “This isn’t funny. This is somebody who has insurance and is dying. And every month he has about $9,000 in medical bills that his insurance company won’t cover. His wife, Rachel, is on the phone for hours and hours and hours, begging the insurance company, ‘please cover what the doctors say he needs.'”

Warren continued, “He talks about what it’s like to go online to with thousands of other people to beg friends, family, and strangers for money so he can cover his medical expenses.”

It’s a devastating story — with echoes of familiarity, too, even for those who are not struggling with a life-threatening disease. (Ever have a medically necessary procedure — like, say, an ultrasound during pregnancy — denied by your insurance? Raise your hand!)

Warren, as it turns out, was referring to 35-year-old father of two Ady Barkan, who’s a lawyer turned prominent healthcare activist. Here is what you need to know about this amazing Jewish father:

1. Barkan is the son of two academics who immigrated from Israel (his mother was born in Romania.) He grew up in a secular Jewish household in California. Barkan has both Israeli and American citizenship.

3. Barkan was diagnosed with ALS, also known as Lou Gehrig’s disease, a degenerative neurological disease that doesn’t have a cure, shortly after the birth of his son, Carl, in 2016. His doctors said that he had 2 to 4 years left before he would succumb to the disease.

4. In 2018, he made public this moving message to his son: “All that matters to me is to make you proud of your old dad, because I’m already so proud of you.”

5. Even before his ALS diagnosis, Barkan was an indefatigable activist for justice. As a teen, according to the Forward, he fought anti-gay rights legislation; in 2012, he became the program director for Center for Popular Democracy, an organization that “works to create equity, opportunity, and a dynamic democracy.” He notably helped lead a campaign to reform the Federal Reserve.

6. He gained media attention in 2017 after he confronted Sen. Jeff Flake on an airplane from Washington, D.C., urging him not to vote for tax cuts that would impact the healthcare of many people. He urged Flake to “be a hero” and help save his life. Flake still voted for the tax bill.

7. After the Flake confrontation went viral, Barkan started the Be a Hero Fund at the Center for Popular Democracy. Aside for fighting for Medicare for All, Be A Hero takes on political causes, like raising $4 million for Sen. Susan Collins’ opponent, after she voted to confirm Supreme Court Justice Brett Kavanaugh.

8. In the past two years, Barkan has been arrested 7 times for protesting in the capitol. His latest protest was against Kavanaugh’s confirmation. Due to his ALS symptoms, Barkan couldn’t move or talk, and so he couldn’t be handcuffed.

9. His memoir, Eyes to the Wind, is coming out in September 2019. It has a forward from Senator Alexandria Ocasio-Cortez and has been blurbed by both Warren and Bernie Sanders.

10. While Barkan has lost many of his political fights — including battles over DACA, the tax cut, and Kavanaugh’s confirmation — he remains optimistic. “Political outcomes are not predetermined,” he once said. “By being involved, we can change what happens.”

11. While he can no longer speak or move around independently, Barkan is still fighting for political causes and is super active on Twitter.

12. Barkan’s response to the first round of the second Democratic debate? Anger! While he appreciated Warren’s shout-out, he believed the moderators asked bad questions and made it impossible to focus on the real human price of our health care system:

Tonight’s #DemDebate on health care was so frustrating. Moderators were cutting candidates off, asking bad questions, and making it impossible to center the human consequences.

But we can do something about this.