Harry Goldenblatt is the Best Character in “Sex and the City” 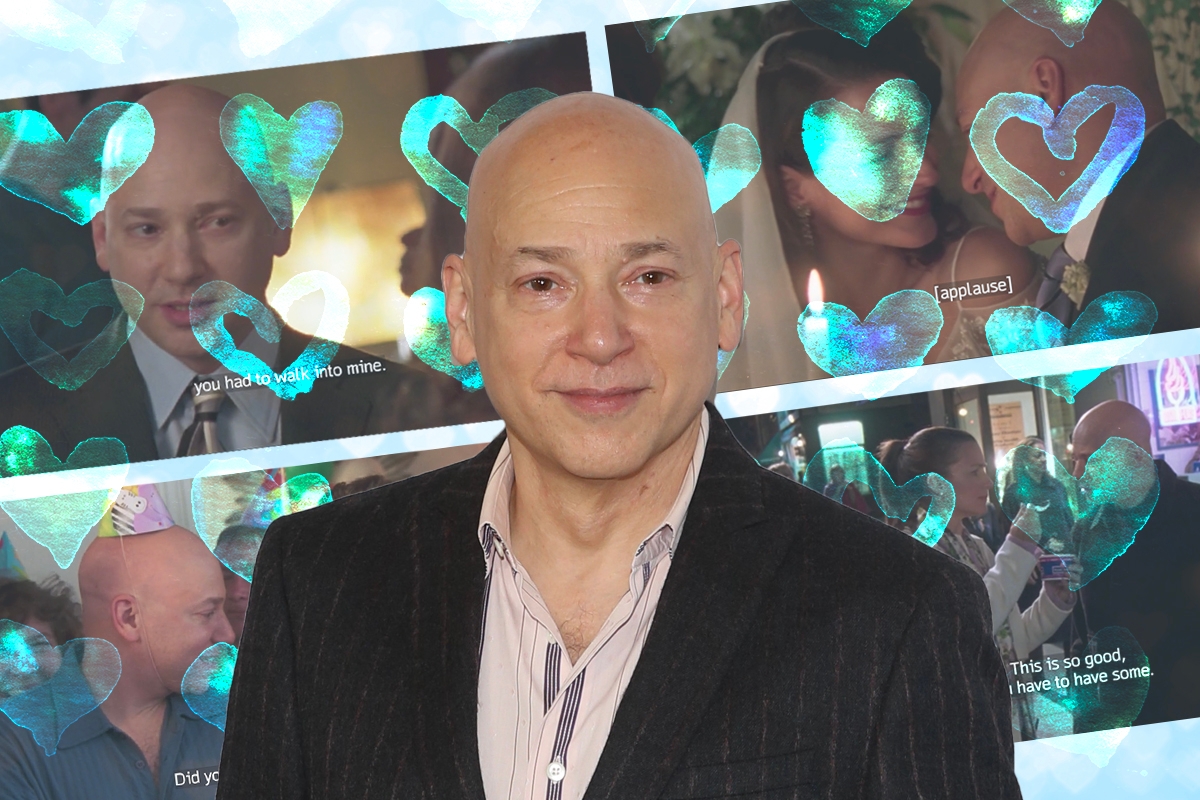 For years, the most important “Sex and the City” question has been: Are you a Carrie, a Miranda, a Charlotte or a Samantha? The de facto personality test may have turned stale over the years, making room for more pertinent questions like “are you an Abbi or an Ilana?” or “which ‘Shtisel’ character are you?” (OK, maybe that’s just an important question for me).

But I’d argue that the real question we should have been asking is which “Sex and the City” man are you? Because the best answer — and possibly the only correct answer — to that question is, hands down, Harry Goldenblatt.

Forget Mr. Big and Aiden, forget about the Russian, heck — you can even forget about Steve (Steve is fine). NJH (that’s Nice Jewish Husband) Harry Goldenblatt is absolutely where it’s at. We should all aspire to either be, or marry, a Harry Goldenblatt. If you play fuck, marry, kill with the SATC cast, the answer to the second must always be Harry — that is, if you have a soul. I am not willing to hear any arguments on that.

You guys can have mr. big and aiden, the true hunk of satc is Harry Goldenblatt. Underrated king

Now, yes, I know, the way Harry’s Judaism is coded into the show, and the Jewish storylines surrounding him sometimes, feel very, um, oy. As I was rewatching all 18 (chai!) episodes of the show that Harry, played by Jewish actor Evan Handler, appears in, I had to sometimes hit pause to gather and convince myself that rewatching some of these scenes did not entail committing a hate crime against myself and my people.

But the way Handler plays him, and the way he loves on Charlotte in the show and the movies, makes it pretty clear that Harry is the best man on “SATC.”

We first meet Harry Goldenblatt, Charlotte’s future husband, in season five in an episode called “Critical Condition.” Charlotte has given up fighting tooth and nail for her marriage with Trey, played by “Twin Peaks” star Kyle MacLachlan, and is hiring a divorce lawyer to help her get the one thing she wants to get out of the marriage: her apartment.

Being Charlotte, she goes to the best firm in town — Bloom & Goldenblatt — and hires Matthew Bloom. But when he proves to be distractingly handsome — not what she needs for the purpose of kicking her ex-mother-in-law, Bunny, to the curb — Harry walks into the room. He’s bald, short, very Jewish — I mean, his last name is Goldenblatt. But if that’s not enough, the first thing you hear him say is: “Sorry to bust in, there’s a bagel here with my name on it.” On the one hand, that’s some basic, stereotypical Jewish representation, but on the other hand… would you respect a man who didn’t take a free bagel when one was available to him?

As Harry spits out the bagel yelling, “Who the hell ordered blueberry bagels?!” (again, cheap but fair point about blueberry bagels) and Charlotte cringes, she decides to hire him precisely because he is not as attractive as his partner (who, to be fair, could also be Jewish — his last name is Bloom, which is a fairly Jewish surname).

Yet, not an episode later, after Harry settles her divorce, personally delivering her the divorce papers and “shvitzing” all over them, he manages to get her to a friend’s bachelor pad (which he tells her he sublet after his own divorce), and with a very candid come on, tells her he can’t stop thinking about her, that she’s “the sexiest woman” he’s ever met. And just like that… the two have steamy sex.

The uncomfortable thing about Harry is that he is the first major openly Jewish character in the show and that he is coded as an unattractive, nebbishy, hairy, sweaty bald man. He is not dangerous because Charlotte is so “out of his league.” He even tells her, “I never thought a shiksa a goddess like you would fall for a putz like me” — and that line truly exemplifies all that is wrong with the original conception of this storyline. When they first get together, Carrie describes them in voiceover as “the bachelorette and the beast,” and Charlotte’s GBFF (gay best friend forever) Anthony extolls the virtue of “ugly sex.”

I’d like to take a moment to pause and say that Evan Handler is not unattractive. He is not the most dreamy man in the show, but he has charming blue eyes, and honestly, bald Jewish men are nothing to scoff at — I mean, have you seen Corey Stoll?

For Harry and Charlotte to marry, though, aside from having her convert to Judaism, the show needs to break this dynamic. And they do.

After Charlotte finishes her conversion, she tries to strong-arm Harry into a proposal, saying that in the 0-10 scale of attractiveness, she lies close to the top and he at the bottom — she’s essentially doing him a favor. She angrily and carelessly asks him if he knows what people think when they see them together, and he responds: “I know what people are thinking. I just didn’t think you were one of them.” As he leaves the apartment, he tells her that he already got a ring. It’s a truly heartbreaking scene.

But Charlotte and Harry can’t stay apart. She tries to attend a singles event at her new synagogue, but Harry’s there too — cue the “Casablanca” reference: “Out of all the synagogues in all the cities, you had to walk into mine” (has there ever been a more romantic line?). Charlotte reifies that she is so lucky to have him and that she doesn’t see what other people see, instead seeing how lucky she is to be with him — as she should.

Harry proposes to Charlotte right there at the singles event (“I am so coming back next week,” says one of the single ladies in the crowd). The wedding itself is a disaster, but a charming one, with everything that can go wrong going wrong, from a broken pearl bracelet breaking to wine spilling on Charlotte’s white gown to Miranda’s speech catching on fire. But after a breakdown in the bathroom, Charlotte is reminded, and Harry agrees, that terrible weddings can make for great marriages.

And their marriage is truly that — great. They have great sex, they have great chemistry, they’re candid and open with each other. There are arguments and disagreements, but no real drama as Harry is easygoing and Charlotte is willing to compromise when needed — and because it is, as Charlotte herself says, bashert.

One could say that conversion is really the only major sacrifice Harry asks of Charlotte — he is not willing to marry a woman who is not Jewish. But the show makes it clear that it’s not really a sacrifice, as Charlotte finds happiness as a Jew. From the moment she dips in the mikveh, Charlotte herself becomes the most central Jewish character in SATC. Her conversion is about herself, not just about her relationship with Harry, and she finds a lot of meaning in the story of another glamorous Jew by choice: Elizabeth Taylor.

Beyond Harry’s support and devotion for Charlotte, what makes him such a lovely character is Handler himself. The onscreen chemistry that he has with Kristin Davis is undeniable, and Harry’s expressions when he sees her, the smiles they share, the playfulness, make Handler inhabit the dreamboat that Harry is.

A lot of Harry scenes still have an “ick” factor, from his hairy back to having sauce on his face, but somehow, it adds instead of detract from his charms. Yes, it stands out that its the Jewish character of all the male characters who has these traits, but to be fair, these moments of visceral corporeality are part of any real relationship, and Harry Goldenblatt is really good at acknowledging that and letting it all slide.

In one scene, after they marry and move in together, Harry is walking around the house naked and we see him sitting in the buff on a white couch. Charlotte, of course, is deeply irritated by this, and asks him to put something on. Of course, he does — he is willing to make a small sacrifice for his wife’s happiness. As Harry saunters off to put on shorts, he does a funny and winning little dance — which establishes him as the most charming man in the “Sex and the City” universe.

I’ve long been fascinated with the “nice Jewish boy” (NJB, if you will) stereotype, and how it gets portrayed onscreen and in real life. The problem is that a lot of self-declared “nice Jewish boys” are, well, not as nice as they seem. They’re riddled with insecurities or entitlements that make them lash out at inopportune moments and unable to see beyond themselves. It’s hard to think of NJBs on TV who are through and through, consistently, nice. But Harry Goldenblatt just might be the purest example of a nice Jewish boy we have. At many points during the show, it’s easy to imagine him being shown as insecure or egocentric — but he never is. His priorities when it comes to his relationship with Charlotte? They’re always right.

Deep down, despite his calling himself a putz, Harry knows his worth. He would never be with Charlotte if he didn’t think, if he didn’t know, that he could make her happy — just as happy as she makes him. And it’s that easy confidence and openness that makes him not perfect, but the ideal “Sex and the City” partner.

As we get reacquainted with Harry in “And Just Like That…,” the new reboot that catches up with (three quarters of) the SATC women now in their mid-50s, it’s so nice to see that Harry hasn’t changed, skating down the hall with his kids, communicating with them openly, and loving on his wife. Because whatever you may think about the sequel, it’s clear that Harry still has got it going on.