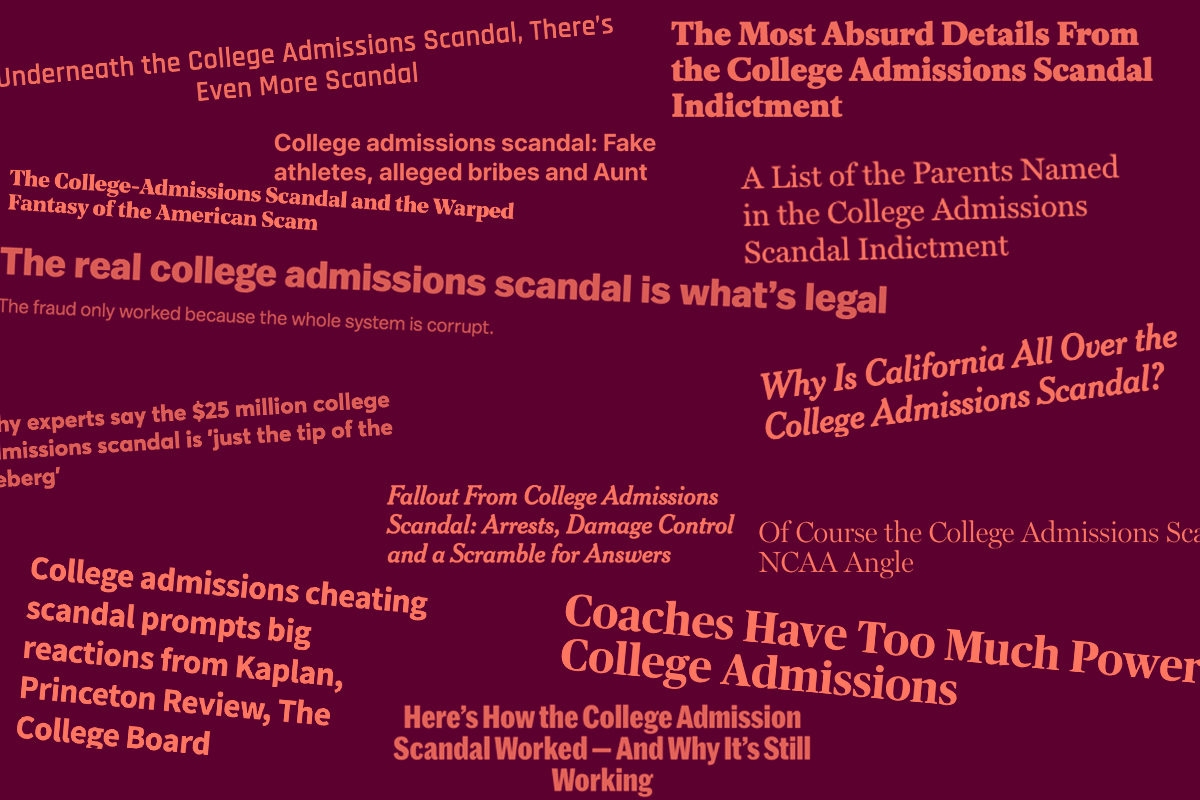 “All College Admissions Are A Pay-To-Play Scandal!” “A slew of CEOs charged in college entrance cheating scam!” “The College-Admission Scandal and the Warped Fantasy of the American Scam.”

That’s just a smattering of the headlines that have been blowing up the internet, ever since the news broke yesterday of a massive scandal in which hundreds of well-to-do parents paid to have people take standardized tests for their children and gave bribes to college coaches to “recruit” their children, among other decidedly non-kosher activities…all in order to secure admission to elite institutions for their offspring.

At this point, I believe in the inevitability of the movie or Netflix series, The Side Door — as the mastermind of the scheme, William Rick Singer, said his methods were akin to using a “side door” to get into these schools. I will definitely watch. All the plot elements are already in place — it’s the perfect storm of wealth, schadenfreude, self-regard, prestige, self-centeredness, and helicopter parenting. And perhaps the juiciest detail is that all of this illegal activity is motivated out of a weird perversion of parental love.

Fifty people — including actresses Felicity Huffman and Lori Loughlin — were charged yesterday in this alleged scam to gain entrance into top colleges. Aside from extreme privilege, what these parents have in common is that they were all motivated by wanting “what’s best” for their kids.

From the outside, it’s quite easy to question whether it is really “best” for a parent to:

1. Loudly and expensively demonstrate their lack of belief in their kid’s abilities.

2. Buy their kid’s entry to a school where they will, at best, struggle with the institution’s academic demands.

3. Deliberately steal a spot from a more deserving student.

4. Do any and all of the above choices.

(Need more time to select your answer? Slip me a few G’s and let’s talk!)

But here’s the uncomfortable thing that this maelstrom has laid bare: We’re always better at seeing flaws in others than we are at seeing them in ourselves.

On social media, my feed is glowing with self-righteousness, as all of us condemn the Huffmans and Loughlins for what they’ve done. (And while they are far from acting alone, like it or not, they are the “marquee” names involved in the scandal.) I get it: After all the political turbulence of the past two years, it’s refreshing to find something we can all agree on.

Because regardless of our political predilections, we can all probably agree that the following things are unfair:

2. Deliberately pretending to have “special needs” so as to get extra time to take standardized tests.

3. Paying someone to give a student a space reserved for athletic recruits at a given university or college, even though that person is not, in fact, an athlete, and perhaps has never played the sport in question.

So, yes, let’s all agree these are bad things to do. But what this points to is an uncomfortable truth — not about celebrities or the wealthiest of the wealthy, but about us. Because, as any college graduate and/or parent of a soon-to-be college student knows, there is a in fact, a vast spectrum of situations in which privilege can rig the college admissions game. And many of us wouldn’t hesitate to be complicit in it.

Here are some of examples of scenarios in which “right” is far from black and white — remember, all you really want is “what’s best” for your kid:

1. Your high schooler needs help in math, and after he spends ample time with his teacher, you realize that he would benefit from a tutor. You ask around, and find out that the “best” tutor to get is $100/hour. The reason that person is the “best” tutor is because they teach at your son’s school — though they are not your kid’s teacher — and they help to make the tests your son takes. If you don’t use this tutor, your kid is at a serious disadvantage; if you use this tutor, you feel kind of ill. What do you do?

2. Your daughter is applying to top-tier performing arts schools which accept less than 5% of their applicants into their musical theater programs. You have the opportunity —  and the thousands of dollars — to hire a coach who knows the admissions directors, as well as the people who review audition videos, and therefore can accurately predict what the reviewers like to see or hear, and will tailor your kid’s performance accordingly. Do you hire the coach?

3. You and your spouse are both proud Stanford alumni. Do you have your child note your alumni status on their application to Stanford, or do you take a principled stand that everyone should be considered on their merits for admission, regardless of their parents’ pedigrees? Would you decide not to acknowledge it, to your own child’s detriment, to make a bigger point — and possibly forfeit admission to another legacy child?

The common denominators of all these scenarios are rooted in their apparent legitimacy — none of these practices are illegal, after all. (It’s not even illegal to donate a couple of million and coincidentally have your kid admitted to Harvard, for example! Amirite, Jared Kushner?)

And in many cases, what’s actually happening during the admissions process is deliberately murky. When a scion is admitted to an elite college, it’s usually the case that no one knows for certain if a donation has been made by the family, or whether the college counselor has communicated to the school that the family has a “history of philanthropy” or “big-donor potential.” Similarly, no one knows if college counselor has “massaged” (read: rewrote) an essay into a Pulitzer-winning masterpiece, or simply offered benign guidance and tips.

These sample scenarios are all firmly, deeply rooted in privilege. As a friend who recently sent her kid off to college told me: “College admissions isn’t a ‘crap shoot.’ It’s akin to casting a play,” and that first-generation students, legacies, and recruited athletes all meet institutional needs in different ways.

Yet, surely we need to acknowledge that the chances of a reserved spot on the crew team going to a kid from an elite New England boarding school — where they actually have a crew team — are significantly greater than that spot going to a kid from East Harlem who’s never crossed paths with a coxswain. Surely we need to acknowledge that the standardized test scores of someone who has had hours and thousands of dollars of private tutoring are probably going to be better than those of someone who hasn’t — regardless of raw intellectual ability.

Even for those of us not breaking the law, the supposedly “level” playing fields are pockmarked by privilege, money, and entitlement. The question is, now that we’re all openly acknowledging this: how are we going to play the game?