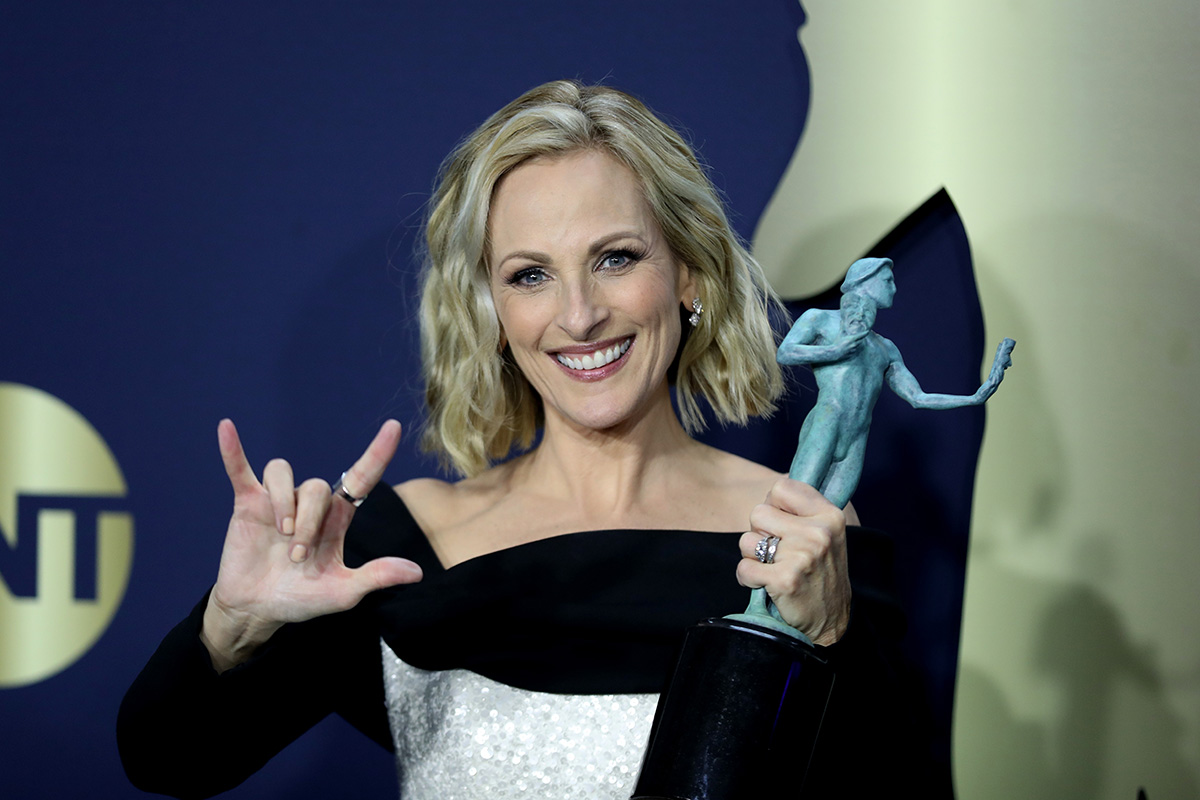 Back in 1987, Marlee Matlin became the first deaf actress to win an Oscar for her mesmerizing performance in the film “Children of a Lesser God.”

And now, 35 years later, the Jewish mom and prolific actor helped make deaf history again, this time at the SAG awards, for her Apple TV+ film “CODA.” The movie follows the story of Ruby Rossi (Emilia Jones), a CODA (a child of deaf adults) and the only hearing member of her family who is torn between wanting to support her family and chase her passion for music. Matlin plays Ruby’s mom, Jackie.

This weekend, Matlin and the rest of her “CODA” became the first predominantly deaf cast to win a coveted Best Ensemble in a Feature Film Award, beating out the casts of “Don’t Look Up,” “Belfast,” “House of Gucci” and “King Richard.”

Matlin, a mother of four who was raised in a Reform Jewish home, took the stage to thank the crowd along with the rest of the cast — who all seemed visibly emotional and shocked.

We're smiling from ear to ear 🤟 CODA receives the Actor® for Outstanding Performance by a Cast in a Motion Picture! #sagawards pic.twitter.com/bjy8LlVQiy

Matlin spoke through her trusty longtime ASL interpreter and “CODA” producer Jack Jason. Jason is a Sephardi Jew (he recently made delicious curabies) and says that he and Matlin share a Jewish sense of humor (and a lot of oy-ing between them).

Matlin took the chance to demonstrate that humor on stage, starting her speech with an (arguably Jewish dad) joke, pointing at the microphone and saying, “I don’t need this,” adding, “that’s why I pay my interpreter.”

“I’m stunned, I’m stunned,” she then told the crowd at the SAG awards (including new SAG-AFRTRA president Fran Drescher, who looked so chic) before thanking the producers, Apple TV+ and the team behind “CODA.”

“Thank you for writing the words and including deaf culture, we love you,” she said. “Thank you to all the CODA interpreters and all CODAs everywhere, all over the world. My kids, all four of them are CODAs.”

In the middle of the heartfelt speech, Matlin took a second to fangirl: “Is Meryl Streep here?” she asked, searching the crowd before finding her and excitedly signing: “Oh my God, I love you!”

Matlin ended the speech with a touching pronouncement about inclusion and deaf representation: “This validates the fact that we, deaf actors, can work just like anybody else. We look forward to more opportunities for deaf actors.”

She then taught the entire crowd at the SAG Awards the ASL for “I love you,” which made for a truly sweet communal moment and I’m guessing made everyone watching who wasn’t already obsessed with Matlin fall in love with her.

There’s one surprising Jewish figure that we have to thank for the gift that is Marlee Matlin — Henry Winkler. Apparently, the Jewish actor and Matlin met when she was just 13, when he saw her perform at the Center for Deafness. At a time when Matlin wasn’t sure whether she should choose the stability of a college education and stable career, or to chase her dream of becoming an actor, Winkler told her, “You know Marlee, you can be whatever you want to be, just follow your heart and your dreams will come true.”

Since then, she’s won an Oscar, a Golden Globe, was nominated for four Emmys, has had her name immortalized on the Hollywood Walk of Fame and has been part of countless TV shows and movies. So yes, Henry Winkler’s heartfelt and somewhat cheesy words of wisdom were definitely true.

Winkler continued to be a part of Matlin’s life. She lived with the Winklers while filming “Children of a Lesser God,” and Matlin and her husband “were married by both a rabbi and a priest on the front lawn at Henry Winkler’s house” over 36 years ago. They have four children, two boys and two girls, and Matlin often posts moving and adorable tributes to her family on social media.

Matlin was raised Jewish, attending Congregation Bene Shalom in Skokie, Illinois — a congregation that was started 48 years ago by deaf Jews, which incorporates both deaf and hearing culture. Matlin had her bat mitzvah there. In an interview with Jewish Life Magazine, she said she was lucky because “I had the benefit of a rabbi who could sign… I learned how to speak Hebrew phonetically, and I signed and spoke.”

Matlin continues to be involved in Jewish causes and giving to Jewish charities. She visited Israel in 2017, and in Hanukkah of 2020, she participated in a panel about Jews and inclusion led by legendary Jewish disability activist Judy Heumann along with Chella Man and lawyer and entrepreneur Alexis Kashar. Matlin has raised her children in an interfaith home with Jewish traditions.

“Where I live there is not a temple with a signing rabbi,” Matlin explained to JTA in 2017, “and though I’m sure I could go to a local temple with an interpreter, I prefer to take the lessons I learned, the richness of Judaism and the culture that my parents passed along to me, and share it with my family, making the best home that I know how to.”

Matlin said that working on “CODA” made her think about her own children: “It’s interesting to watch kids, what it is they want to choose, what path they wanted to go on, how they want to deal with everything in their lives, the choices that they make,” she told Extra.

If the cast’s win wasn’t exciting enough, Matlin’s “CODA” co-star, Troy Kostur, became the first deaf actor to win a SAG Award. On stage, a very emotional Kostur managed to jokingly thank his wife for reminding him to make sure his fly was zipped up. “I’m so proud, and it just shows that dreams can come true,” he said in his speech.

Mazel tov to Kotsur, Matlin and to the rest of the “CODA” cast and crew — who may not be quite done making history yet. “CODA” is currently the first movie with a majority deaf cast nominated for an Oscar. Here’s hoping there’s another golden statuette in Matlin’s future!