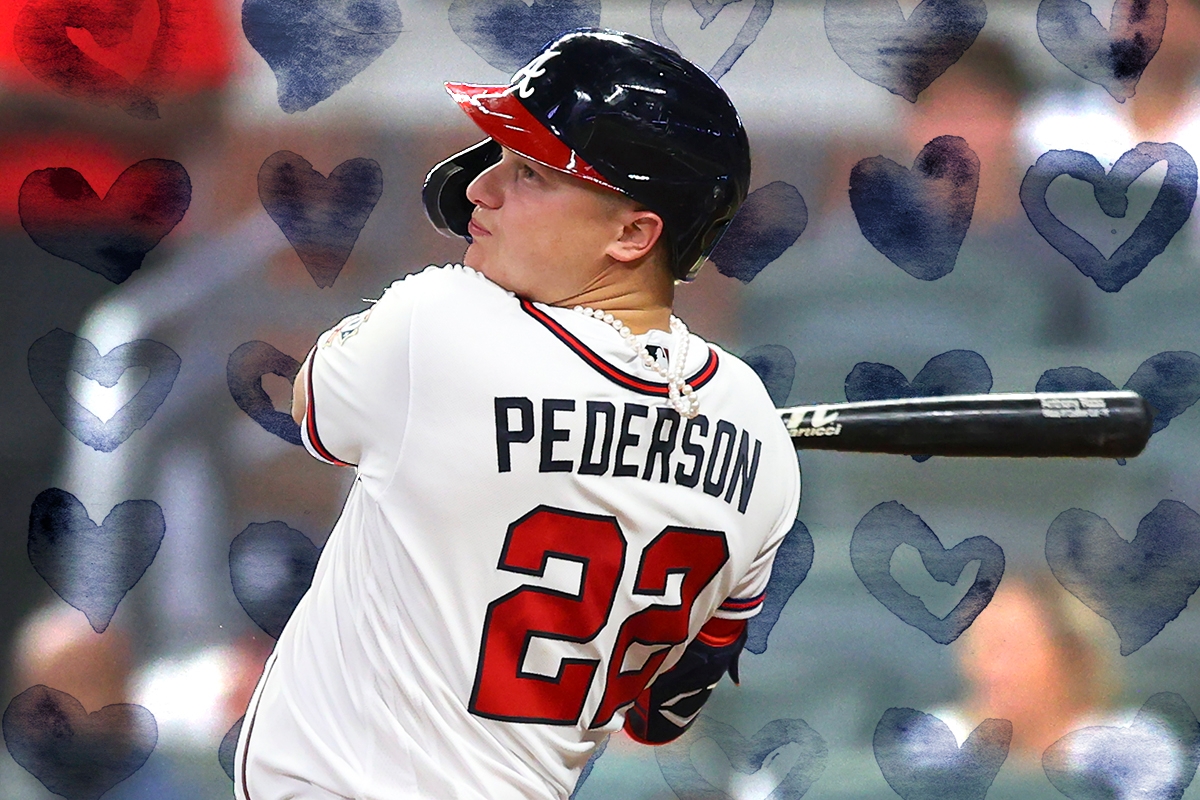 Everyone is obsessed with Joc Pederson right now, and not just because the Jewish dad and Atlanta Braves slugger is a great player —  though, of course, he is!

The 29-year-old has played a major role in helping his team advance to the National League Championship Series — which means that, if they clinch that, the Braves will be on to the World Series next! In fact, Pederson has a track record for being so strong during post-season games that many fans have started to call this month “Joctober.”

If that isn’t awe-inspiring enough, Pederson is also admired far and wide for his unique jewelry game! The father of two has been sporting a pearl necklace while going to bat in recent MLB games, and we are here for his adoption of this classy 1950s housewife/stylish grandma accessory. When initially asked about the necklace, the outfielder simply said, “There was no story behind it, that he’s just ‘a bad bitch,'” a sports journalist wrote on Twitter. Honestly, this chutzpadik reply really had baseball fans and Jewish athlete-watchers reeling!

“I saw some [pearl necklaces] and thought they looked cooler than the black or gold chains [traditionally worn by players], so I texted my jeweler, got some, and it kind of took off,” Pederson later explained.

As my colleague Evelyn Frick at Alma writes, whether or not Pederson’s pearls are an attempt to subvert gender norms, it’s kind of a radical move — especially in professional sports, where softness and femininty aren’t typically revered. As a parent, I can’t help but love that this is the example Pederson is setting for his two kids — to dare to be different (or be “bad bitch,” if you will). We could all use a little bit of his chutzpah!

While his mother, Shelly, is Jewish, Pederson and his siblings grew up in Palo Alto, Calif., in a home not aligned with Jewish religion or rituals. According to his brother, Tyger, “Sometimes went to bar mitzvahs or experienced Hanukkah at a friend’s house.”

Nonetheless, Pederson is embraced by the Jewish sports establishment — and even joined Israel’s baseball team back in 2013! “My mom’s Jewish, I grew up in a pretty Jewish community… I had enough information and Jewish background, or heritage, that I could play,” he said about playing for the Jewish state.

While it’s unlikely that Pederson is raising his kids Jewish, by all accounts he appears to be a menschy dad of the finest order. His social media feeds are filled with loving tributes his wife, Kelsey Williams, and their children. (Bonus fun fact: When the couple tied the knot in January 2018, John Legend performed at their wedding!)

Adorably, when Pederson’s elder daughter, Poppy Jett, was born in October of 2018, the player, then 26, changed his walkup music to “Big Poppa” by The Notorious B.I.G. Talk about dad pride!

Then, in 2021, when he left the Dodgers after a decade on the team, he wrote a reflection on that time period. He shared that every night, when he puts Poppy to sleep, “I kiss her on the forehead and we say the same two things to each other… I tell her I love her. (She says back, ‘I love you!’)… And I tell her to dream big. (She says back, ‘Dream big!’)” We love that!

A video showcasing his time with the Dodgers has many moments with his daughter on the field. There are also videos of his son, who was born in the fall of 2020, whom Pederson appears to call Wilder in the video — though he usually nicknames him “Bubba” or “Bubs” in social media posts.

In a recent social media post, Pederson shared a picture of himself with his two kids, wearing matching tie-dye t-shirts that little Poppy made them. It was just so adorable:

In a video posted by the official MLB account, dated to his standout win on October 11, Pederson is shown leaving the stadium with Poppy, still wearing the pearl necklace around his neck. He holds her hand as he walks out of the stadium with her, lovingly chatting with her and making sure the toddler safely makes it down the stairs. It is all very darling:

#girldad for the win once again pic.twitter.com/yKAZ48C3b0

Mazel tov on your recent wins, Joc, and we’ll be cheering you on in the National Championship Series!