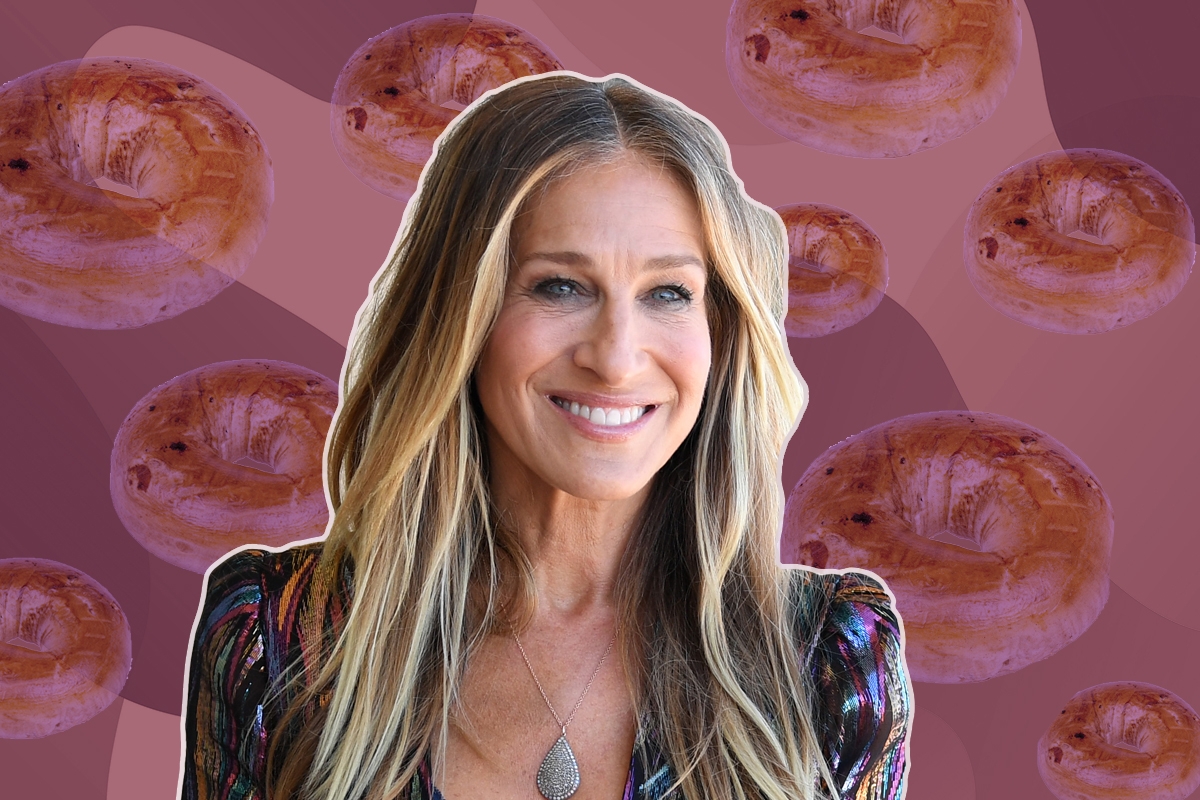 The Sex and the City cast strikes again with their unusual bagel tastes!

Back in 2018,  then-New York gubernatorial candidate Cynthia Nixon (yep, SATC‘s Miranda Hobbes) gave a scandalous order for lox, cream cheese, and capers on — wait for it — a cinnamon raisin bagel (shivers). And now, we have Sarah Jessica Parker‘s bagel order and it is truly not your average bagel and schmear.

If you are offended by such things, know that the order is not kosher. And, since the majority of American Jews do not keep kosher, and Parker and her Jewish husband, actor Matthew Broderick, mostly consider themselves culturally Jewish, this isn’t unexpected —  but, still, we wanted to warn you. OK, now on to the carbs!

In a Grub Street piece from January 22, Parker — who is, we’re excited to report, returning to the role of Carrie Bradshaw in an SATC TV revival soon —  shares what she eats in a particular week. Among the adorable tidbits the piece offers up is her bagel order.

She doesn’t specify what type of bagel she gets — which in my humble opinion, is a very important thing to omit — but here is what she does write about her bagel from Bagel Buffet on 6th Avenue (between 13th and 14th street, to be exact):

“Got mine toasted with Kerrygold butter wall to wall, and I added Grey Poupon mustard and four slices of Boar’s Head salami. My son, husband, and I love salami. Love salami.”

Wait, what?! No schmears, no lox, not even egg salad — this bagel is not what I was expecting from a longtime New Yorker like SJP.

Now, after I read this to my husband, he said that this reminded him of the popular French sandwich that usually comes with dried sausage (or salami), butter, and cornichon pickles. So the combination itself is fairly common.

Also, loving salami is actually super Jewish, I would argue! I’m thinking big plastic-wrapped kosher beef salami. Know what I’m talking about? If you’re a certain type of Jew — or, say, you’ve ever been to Katz’s Delicatessen on Manhattan’s Lower East Side — you know what I’m talking about. Now, Boar’s Head salami is not kosher and is usually made out of pork and beef, but it is evocative of that.

It’s just the mix of it all on a bagel that really gets to me. Especially the wall-to-wall butter and Grey Poupon. What a daring mix for a bagel! I see this on a sub, on a roll, on a delicious baguette, but on a bagel?! It’s a lot.

“In theory, I want to hate it because it’s so far from a NY classic,” Nosher editor and Kveller contributor Shannon Sarna told me. “But in reality, I’m sure it’s delish.”

OK, fine, I concede. It is quite possible that this bagel is very good. I am just too ashamed to order it at my local Brooklyn bagel shop and try.

Aside from the fact that SJP’s diet is very not kosher (again, not unusual for American Jews) this entire piece does feel very Jewish. She makes matzah ball soup twice in one week. Twice! Even my very Jewish mom would be proud of that feat. She also uses recipes from Jewish legends Joan Nathan and Julia Moskin. (“I love both of those writers; I love their whole history. They are people I go to all of the time for recipes,” she writes).

She writes about how her family saves everything, even cheese rinds, and how she grew up poor and associates food with stability. She also reminisces about the subway, Chinatown, and getting egg cremes. There’s just a very Jewish New York sensibility to it all.

The piece also offers a glimpse into how the Parker-Broderick household — which includes kids James Wilkie, 18, and 11-year-old twins Tabitha and Marion —  seems to really revolve around food. Their life seems to be anchored everything they eat and plan to eat! I also love how Broderick gets concerned when food does “move fast enough” and everyone has to reassure him that they like what’s on the table. It all reminds me so much of my Jewish grandma who cooks 521 dishes and then complains that there’s too much food left and we didn’t like it.

It’s also so nice to get a glimpse into Parker’s usually fairly private relationship with  Broderick. She offers up adorable little details about him, like his obsession with beans and with finding the perfect spaghetti bolognese recipe.

I have to admit, I’m very much into this family’s entire dynamic when it comes to food. Maybe I’ll have to try that weird (and somewhat intriguing?) bagel order, after all.