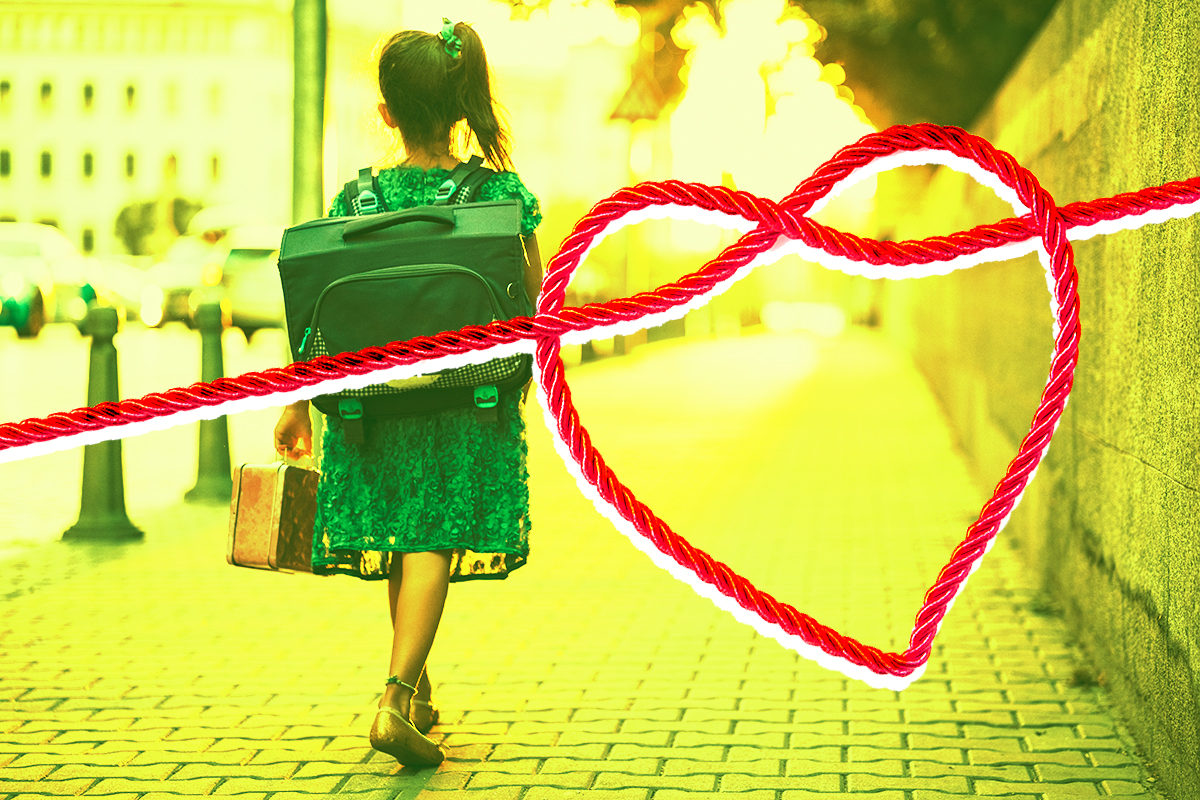 As a child, the night before the first day of school was always one of nervous agony for me. I’d spend the night sleepless, trying to come up with the perfect scripts of what to say to my classmates. I’d worry about the ideal outfit to make the best first-day impression. Each one of those choices felt big, as if they were to decide my fate for an entire school year, which, as a child, felt like an eternity.

Yet, among those many variables to worry about, there was one thing I could count on: My mom would send me off to school with protection, of sorts, in the form of a red string tied around my wrist.

The tradition to wrap a red string around your wrist to ward off the evil eye (defined by this BBC article as “a curse transmitted through a malicious glare, usually one inspired by envy”) doesn’t have a single known origin, but it has become a popular and meaningful accessory over the years, especially among more mystical streams of Judaism.

The string was red and angry; it seemingly vibrated with the same nervous energy that I was feeling. But I was also a naturally fidgety child, so I liked having something to play with, a welcome and malleable distraction from my own nervousness. And while my mother’s fierce protectiveness often drove me nuts, the superstitious amulets she would bestow on me also made me cared for and loved.

The first day of school is rife with anxiety, for kids and parents alike. Our children disappear behind classroom doors into a world of unknowns — a world that hopefully holds new friends and exciting academic challenges, but one that might also hold bullies and disappointments.

For my mom, those first days of school were always overwhelming, and I think the red string she tied on my wrist was as much for her as it was for me.

My mom was a determined believer of the evil eye but, at some point, she became disenchanted with the trendy Kabbalistic connotations of the red string. (Madonna, a believer of the Jewish mystical tradition, has famously been spotted with one.) More significant, however, is that my mom doesn’t like dirt — at some point, the idea of her messy child (that’s me) wearing a grimy, tattered red string intended to fall off or disintegrate on its own was a bit too much for her to stomach. Between her fear of the evil eye and her contempt of germs, it was the latter that won, and eventually she dispensed with the tradition.

But the red string was not the only amulet my mom bestowed on me. Indeed, the evil eye, and the need to ward it off, was a constant presence in my life. When I was a kid, the evil eye lurked at every corner, and amulets against it popped up in the nooks and crannies of our family’s life. At the top of each stroller of every one of my cousins (and recently, that of her first grandson — my son), hidden from sight, my mom gently pinned a silver hamsa. In my grandma’s drawers, I once found bags of salt meant to chase the evil eye away. No black cats went by without the “pu, pu, pu” meant to chase off the bad luck they brought. Every time an optimistic projection was made, someone always looked for a wooden surface to knock on.

While the concept of the evil eye is prevalent in cultures around the world, from ancient Greece to modern Brazil, ayin hara (literally “evil eye” in Hebrew) can be found in Jewish rabbinic texts that date all the way back to the 2nd century, which suggest that the evil eye is connected to several biblical incidents.

For those who believe in it, the evil eye isn’t randomly assigned. It can be brought by the jealousy of others. To this day, my mother talks about how the bad energies of people in your life can lead to anything from unemployment to broken limbs. But, as this Vice article reminds us, we can also bring the evil eye on ourselves by acting without humility. It’s why many Jewish women do not buy anything for their child before it is born — even the presumption that one will have a healthy baby can bring on the evil eye.

My mom was never the kind of mom who believed that her (constant, and amazing) vigilance would stop bad things from happening to her children. But that was even more felt when we were away from her — just today, she told me about the debilitating stomach aches she had when she first sent my brothers to preschool.

An evil eye charm may not offer our children full protection, but it does mitigate the anxiety of parents, as it has for my mom. And yet, despite that red string, school still sucked for me as a kid. But I felt embraced and cared for by my mom, and that mitigated a certain amount of suffering.

These days, I consider myself a rational person; I don’t really believe in the evil eye. But my son is starting daycare next week and, if I’m being honest, some small part of me worries that even sharing this information will draw the evil eye. I admit I have Googled “evil eye protection baby,” but putting red strings and bracelets with charms on a toddler feels like a terrible (and possibly life-threatening) idea.

Still, next week, as my son starts school, I want to give him an amulet, too. Perhaps a discreet hamsa or an evil eye charm attached to a hidden corner of his schoolbag. As he grows older, I’ll clue him into this tradition, hoping that these objects — little dangly charms, perhaps eventually bracelets, whatever he prefers — will remind him that he is wrapped in my love as he goes through the day, even when we are apart.