These Amazing Orthodox Nurses Are Fighting Measles in Their Community 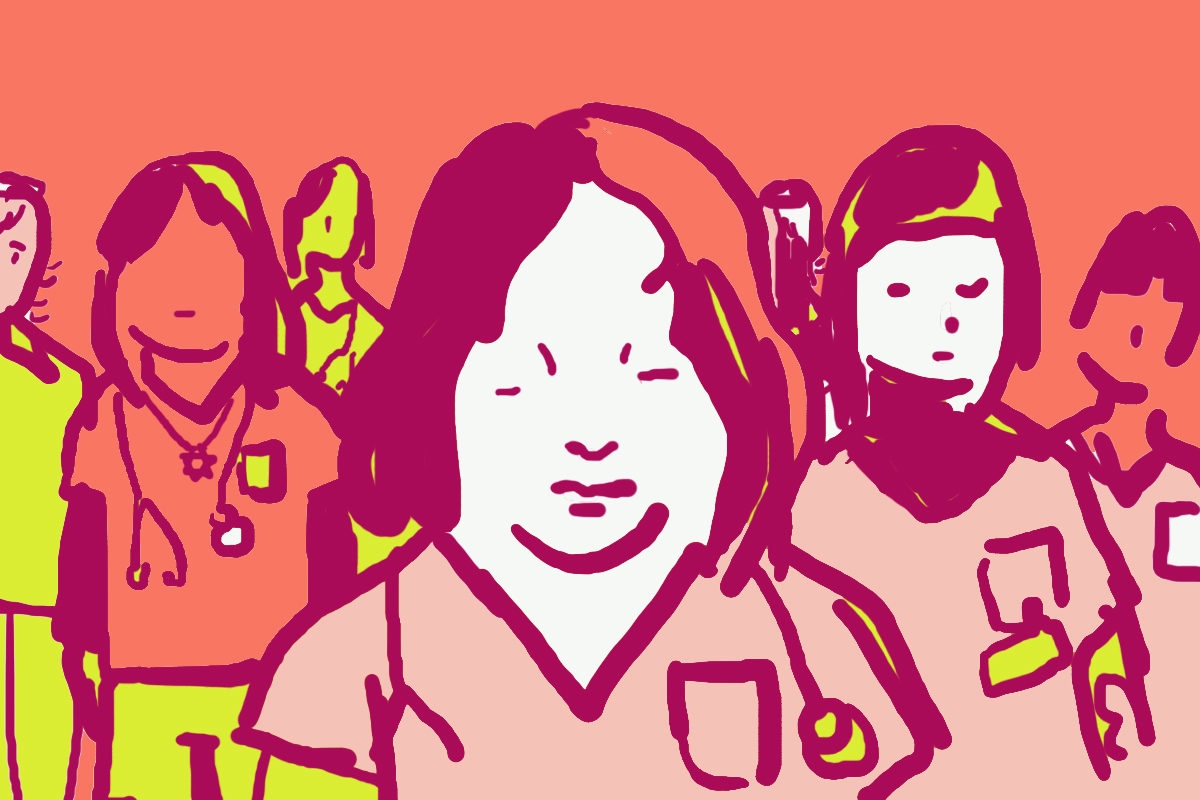 Back in 2000, physicians and parents sighed with relief, as measles was considered eradicated in the U.S.

But that relief, unfortunately, was premature — the U.S. is currently experiencing what is likely the second-biggest outbreak of the virus since that time.

So far this year, between January 1 and March 29, 387 cases of measles have been confirmed in the U.S. That’s more than the total number of cases diagnosed in all of 2018.

Many of these cases originated in Orthodox Jewish communities, likely introduced to the disease by travelers from Israel, where there’s also a measles outbreak. In Brooklyn, there have been more than 214 confirmed cases of measles since October 2018, mostly in the Orthodox neighborhoods of Williamsburg and Borough Park. In New York’s Rockland County, there have been over 150 cases since October — just last week, the county took the dramatic step of barring all unvaccinated individuals under the age of 18 from all public spaces for 30 days.

Why is this happening? Well, the spread has nothing to do with Judaism. According to Vox, tight-knit and traditional communities are especially susceptible to anti-vaccine misinformation, communities like the Somali immigrants in Minnesota, the Slavic community in Washington, the Amish community in Ohio, and yes, the ultra-Orthodox communities in New York and New Jersey.

As NYU psychologist Jay Van Bavel told Vox, within these communities “other group members — people whom you know well and trust — can affirm the wrong beliefs,” including the belief in anti-vaccine propaganda, which preys upon the very primal fear mothers have about their children’s health. (And yes, it’s usually the mom: According to the Department of Labor, women make 80% of the medical decisions in the U.S.)

To counter the anti-vaccine information flooding the ultra-Orthodox communities, a group of brave and compassionate medical professionals have risen to the task. Many of these health warriors are mothers, all of them are nurses, and, even more strikingly, all of them are Orthodox Jews.

“We felt that, as Orthodox Jewish nurses, we absolutely had to have a voice and be involved,” Tobi Ash, a Miami-based nurse scientist and member of the Orthodox Jewish Nurses Association (OJNA) Vaccine Task Force tells me.

Ash is one of around 25 nurses from across the country in OJNA Vaccine Task Force. The Task Force is headed by Blima Marcus, an ultra-Orthodox oncology nurse at the Memorial Sloan Kettering Cancer Center and an adjunct professor of nursing in Hunter college from Borough Park, Brooklyn.

There are measles outbreaks all over the country, and the world. Chaya Milikowsky, another Task Force member, who’s also an ICU nurse in Michigan and a mother of five says that while the outbreaks are not exclusively happening the ultra-Orthodox Jewish community, “in this community, in particular, that we feel like we can make a difference.” 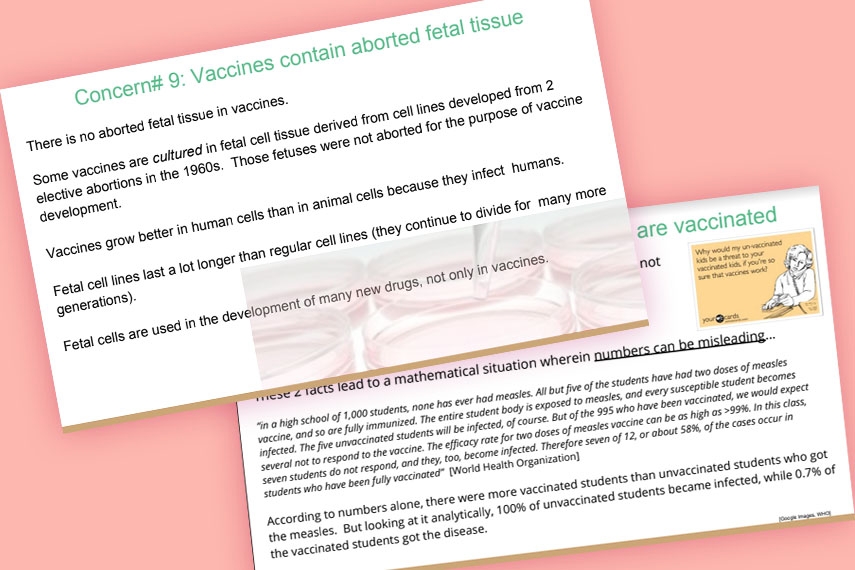 Slides from an OJNA’s Vaccine Task Force presentation, presented at living room sessions in neighborhoods where the outbreaks are happening

The OJNA Vaccine Task Force wants to change the misperceptions about vaccines, but they have a lot of misinformation to hack through  — especially the persistent rumor that vaccines in general (and the MMR vaccine in particular) cause autism. This rumor was recently refuted (again!) in a large, 10-year study that surveyed over 600,000 children.

Ash, a mother of four, understands this type of fear-mongering all too well: “It grabs you in your emotional gut about being the best parent you can be,” she says. “The last thing we want to do is deliberately cause harm to our children.”

According to Milikowsky, these ultra-Orthodox mothers are coming from a valid place — they’re concerned about the health of their children, she says, and they’re being thrown information from different sources. “They’ll say to their primary care physician, ‘Are vaccines safe?’ and then the doctor says, ‘Of course they’re safe,'” Milikowsky says. “And then they get these alternate anti-vaxxer sources telling that vaccines are dangerous, they cause seizures, they cause autism, kids are dying from SIDS.”

Unfortunately, as MIlikowsky points out, most health care providers don’t have the time to allay the concerns of each of these women, which leaves them vulnerable to very heavy-handed information coming from anti-vaxxer groups.

Within the Orthodox Jewish community, the dissemination of anti-vaxx propaganda has been attributed to an innocuously named hotline called “Akeres HaBayes” (“housewife”), which intersperses cooking tips and Torah classes with anti-vaccine lectures; and, perhaps most troubling of all, a widely distributed, professionally-designed pamphlet from an organization called PEACH, which stands for Parents Educating and Advocating for Children’s Health.

The title of the PEACH pamphlet, “The Vaccine Safety Handbook,” feels medical, like something you’d pick up a the doctor’s office. It’s 40 pages long and filled with charts, diagrams, and approachable cartoons. It also contains halachic points of interest, (outdated) signed letters from rabbis, and, weirdly enough, a quote from Mark Twain. 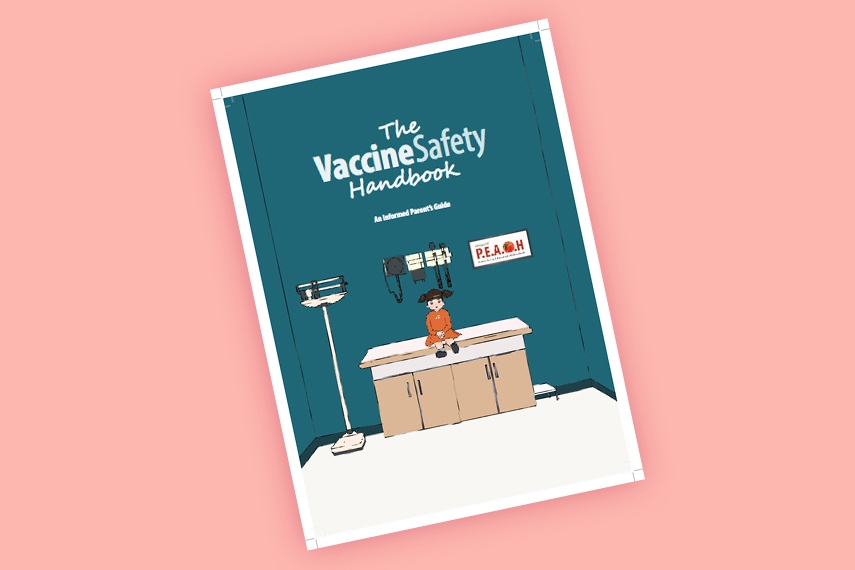 “It wove together some very few true facts, and put in an enormous amount of emotional hype and deliberate misinformation,” Ash explains.

To combat this, the Task Force is also adopting a many-pronged approach, including living room sessions and meetings with women in these communities that have concerns about vaccinations. The group also has a designated e-mail and Google number for parents with questions about vaccines.

“No question is stupid,” Ash tells me. “A lot of the nurses are women, almost all of us are mothers. We understand, we give you information that we look for our ourselves.”

Most significantly, the Task Force is also working on their own book, PIE, which stands for Parents Informed and Educated. Ash calls it “the antidote to PEACH.”

Ash is very clear that the PIE book is not meant as propaganda. “I’m not here to convince anyone, I’m not saying, ‘Do this because I say so,'” she says. “I give you information based on facts, not an opinion.”

Writing the PIE pamphlet may sound like a job, but for the nurses involved, it’s very personal. “Anything that I wrote, I, literally, brought up the emotional heart part of me,” Ash says. “[It was] as if I was writing to another Jewish woman, with love and empathy, that all of us wanted the best for our Jewish children. I wrote as if I was talking to a friend.”

Milikowsky feels the same: “I’m an Orthodox Jew like you, I’m a mother like you,” she says. “I care about the health and wellbeing of my children just like you, we’re coming from places of commonality, we’re not here to fight with people.”

“We’re hoping to spread the way the original way the PEACH pamphlet, door to door, leaving it in doctor’s office, mailing it to the residents of these communities, we’re hoping to pretty much use their tactics to our aim,” Milikowsky says. The book is in its final stages and will be published in the coming weeks and the task force has launched a GoFundMe campaign to help fund its printing and distribution.

“If even one family, one child, is prevented from getting the disease, it’s all worth it,” she adds.