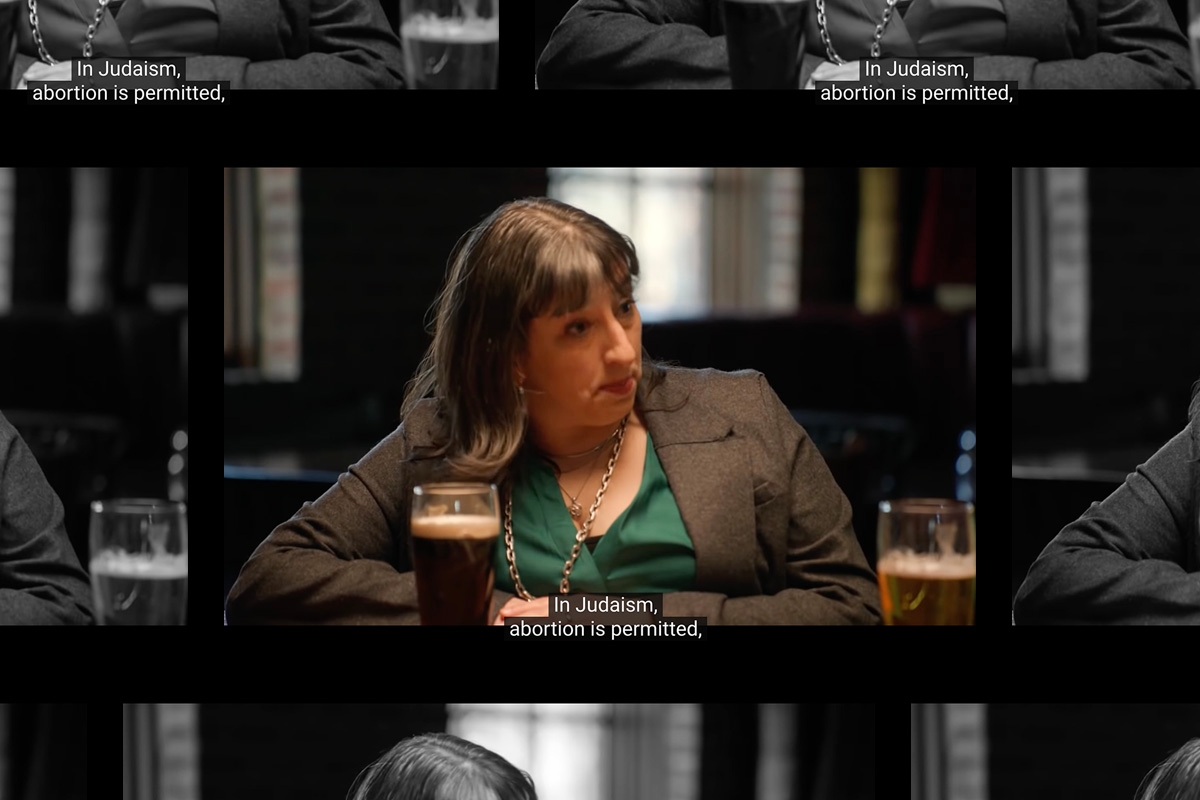 Editor’s note: This piece was first published on May 3, 2022. We are republishing it today in light of the news about the Supreme Court’s devastating decision to overturn Roe v. Wade.

Unfortunately, with today’s news about the Supreme Court’s intentions to rule in favor of the ban and overrule Roe v. Wade, her brilliant comments from the segment are even more pertinent today.

The sketch, which takes place in a bar, features Ruttenberg, a member of the National Council of Jewish Women‘s Rabbis for Repro network, in conversation with the director of Repro Legal Defense Fund, Rafa Kidvai; reporter Jamie Manson, the president of Catholics for Choice; and Sam Bee. Yes, it’s the old “a Jew, a Muslim, and a Catholic walk into a bar” — except it’s not just funny, it’s also incredibly poignant and a little scary.

The first question Bee asks is how each religion views abortion, and Ruttenberg succinctly and emphatically replies that “in Judaism, abortion is permitted — and where the pregnant person’s life is at stake, it’s required, because the health and well-being of the pregnant person come first.”

Bee and the religious leaders go on to talk about when the soul enters the body, which the Mississippi law argues is at 15 weeks. “The Talmud says that for the first 40 days, the fetus is mere water — that would be about seven to eight weeks of gestation,” Ruttenberg explains, making it clear that there really isn’t religious consensus about this issue.

Ruttenberg also agreed that the Mississippi ban is an infringement on Jewish religious liberties. She wasn’t the only one on the panel to agree, as Kidvai shared that there is absolutely no ban on abortion in Israel, and a recent Pew poll showed that the majority of Catholics believe abortion should be legal.

Abortion bans are a violation of religious freedom.

As well as a violation of dignity, autonomy, basic human rights.

This is the Jewish case for abortion justice: https://t.co/OwdI1QKA9Q

“Religion has been used to justify atrocity and to maintain power for centuries. Now, it is being used to hold power and… entrench existing power structures,” Ruttenberg explained.

Amen. On days like this, we’re so grateful for Rabbi Danya and the amazing activists, Jewish and otherwise, who continue to fight for the rights and the freedoms of all people who can get pregnant.