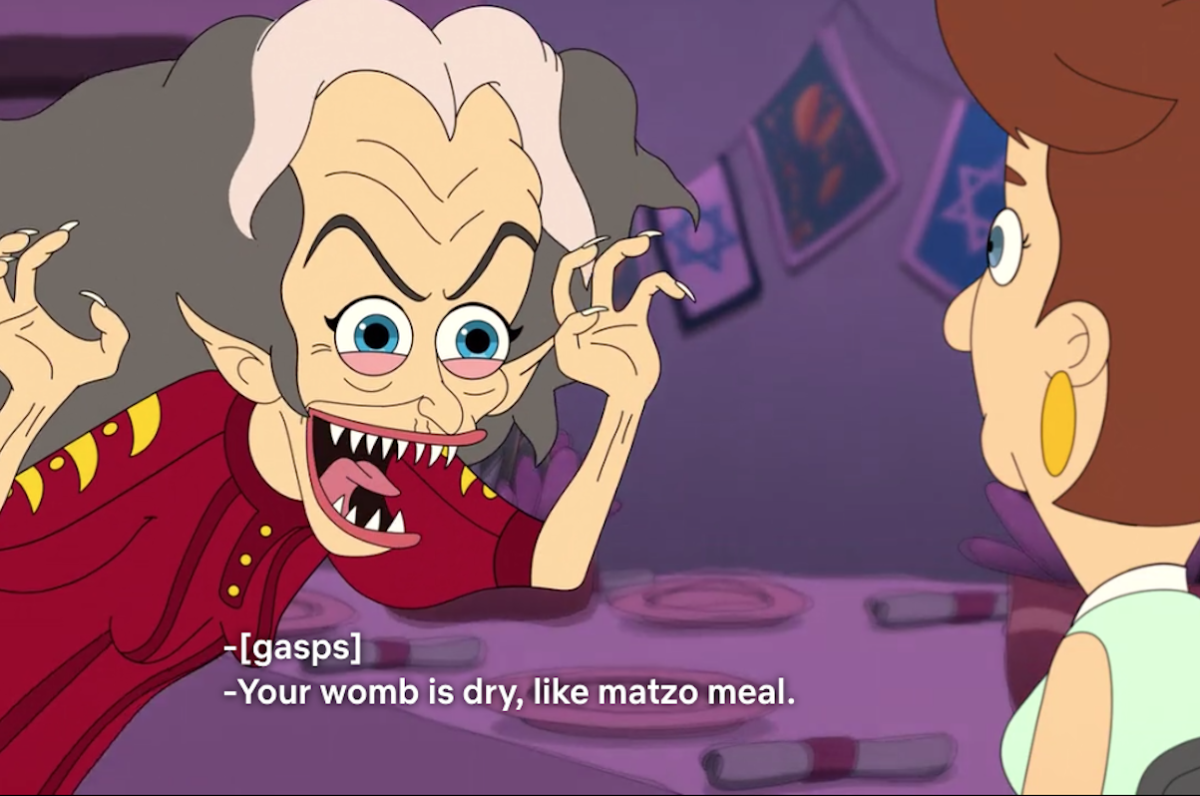 Hey Kvellers! I’ve already told you why you should watch Big Mouth, the very Jewish show about puberty, with your tweens. And now there’s a very good, relatable reason for moms to tune in, too: Jewish comedians Nick Kroll and Andrew Goldberg — notable Westchester Schechter alumni — just dropped the third season of their hit Netflix show, and this time around the sex education isn’t just targeted at teenagers.

For those who have yet to binge on the glory that is Big Mouth, the animated comedy centers on a group of classmates — Andrew, Nick, Jessi, Jay, and Missy — who are each assigned a “hormone monster” to help them navigate puberty. Last season, we were introduced to several new beasts, like the Shame Wizard and Depression Kitty. Now, this season, Big Mouth delivered up the comedic gold we didn’t know we needed: the Menopause Banshee.

Voiced by Jewish actor Carol Kane, it seems fair to claim that the red motorcycle-riding Menopause Banshee is a member of the tribe. It also happens that the series’ newest monster was introduced in the most Jewish episode of the season, “Florida,” AKA the Passover episode. She first appears on her badass bike while Andrew and his family speed down the highway on their way to Florida for the annual Passover seder. Barb, Andrew’s mom, begins sweating bullets, at which point the banshee zooms past her and says, “The change is coming, Barbra!!!”

It isn’t until their third meeting that the Banshee reveals her identity: No men need fear to heed my threat/Your mood she swing the tears do fall/And soon you’ll dance at the banshee’s ball!

The limerick finally hits Barb like a ton of bricks: She’s going through menopause. “Hot flashes, insomnia, my mood swings…” she says. “Whitefish on a Triscuit, I’m not ready for menopause!”

Like puberty, no one is really ever ready for menopause. But, unlike the recent surge of TV shows and movies about teens honestly and awkwardly navigating the changes in their bodies — Pen15, Sex Education, Good Boys — menopause has largely been left out of the conversation. Until now, that is. Recently, there’s been a spate of media about menopause — including an episode of Amazon’s Fleabag and author Darcy Stienke’s book Flash Count Diary: Menopause and the Vindication of Natural Life — indicating that this completely natural occurrence is finally inching towards the mainstream.

Menopause literally means the “ceasing of menstruation,” and is considered official after a woman’s last menstrual cycle. Considering it’s something that happens to all women — at a rate of about 6,000 per day — it’s pretty shameful that something so normal is still considered taboo.

Then again, parallel to puberty — also notably damp with stigma, and that’s something that happens to all people — menopause represents the loss of youth and desirability. (See Amy Schumer’s brilliant sketch, featuring Tina Fey and Patricia Arquette, in which they celebrate Julia Louis-Dreyfus’ “last fuckable day.”)

Still, hot flashes and mood swings aside, some of this new truth-telling also indicates that maybe menopause isn’t so terrible, after all. As Kristin Scott Thomas’ character in the second season of Fleabag says, “You’re free! No longer a slave, no longer a machine with parts. You’re just a person, in business.”

On Big Mouth, the Menopause Banshee tells Barb during the Passover seder: “Your womb is dry like matzo meal!” Defending her youth, Barb quips that she made love to her husband and ate two helpings of Chinese food the night before. “Yes, I watched! Raw dog and all/no fear of pregnancy at the banshee’s ball!” the monster said.

Barb realizes there’s an upside to losing fertility: unprotected sex! “The next chapter’s yours to live! And now you have no fucks to give!” the Banshee says before vanishing into the night.

Brace yourself, because here’s where things get super Jewish and badass.

During the search for the afikomen, Andrew is caught making out with his cousin in their grandfather’s bedroom. His uncle and father get into a fist fight which is promptly broken up when Barb screams “STOP IT!” and her inner Banshee is released. As the entire state of Florida begins to crumble, the menopausal Jewish mom proclaims that she’s “hot and I’m sweaty and life is too short for this shit.”

As the entire state of Florida begins to crumble and burn, Barb, Marty, Andrew, and his best friend, Nick hop into their car to escape the “shithole.” But, oh no! A huge ocean wave blocks the Jews from escaping Egypt — er, Florida — but Barb saves the day and symbolically comes to terms with her new life stage by embracing her Menopause Banshee: “This day we need to part the sea/Banshee, lend your power to me!”

Like Moses with his stick, Barb harnessed her inner hormonal changes and split the “red sea,” thus symbolically leading herself to freedom — in other words, she’s coming to terms with menopause.

Here at Kveller, we’re super proud of Kroll, Goldberg, and the rest of the Big Mouth writer’s room for shedding light on a topic that’s been swept under the rug for far too long. The cartoon has been scrutinized for being too raunchy for tweens, but introducing the Menopause Banshee adds another layer to Big Mouth, and illustrates the show’s capacity and eagerness to delve into all aspects of human sexuality.