We Love How This Jewish Mom Influencer Deals With Online Haters 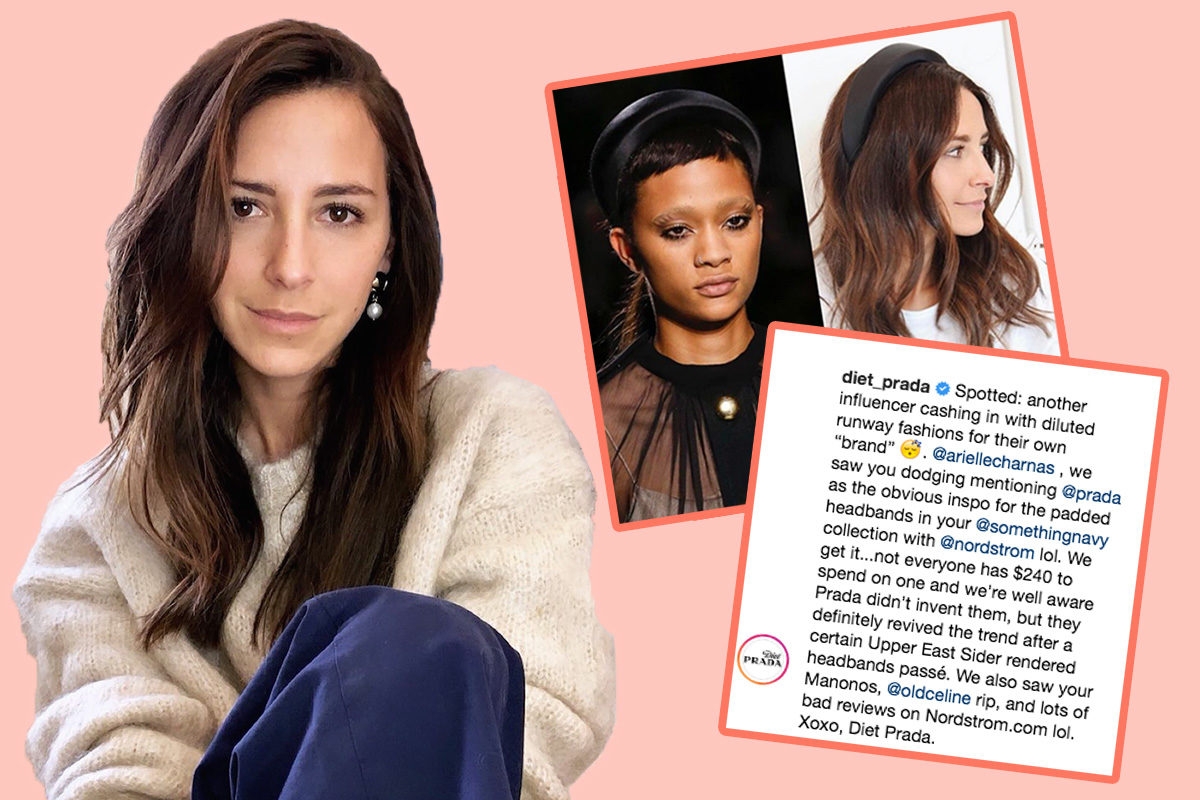 Just what makes Jewish mom and major fashion influencer Arielle Charnas so irresistible to stalk on Instagram? Her authenticity and transparency, that’s what!

Over the past year, I’ve watched Charnas as she launched her fashion brand, Something Navy (so named after her popular blog); gave birth to her second daughter, Esme; and experimented with CBD to ease her anxiety — all in real time.

When Charnas’ 1.2 million followers — myself among them — watch her Instagram stories, we feel like we’re practically sitting next to her at weekly Shabbat dinners, and dates with her husband, Brandon.

I’m kind of addicted to Charnas’ content — tapping through her stories is part of my daily routine. So when I saw her engage in a public battle with a “fashion watchdog” Instagram account, Diet Prada, my eyes were glued to the screen.

Diet Prada — which is run by a two-person team, Tony Liu and Lindsey Schuyler — also has 1.2 million followers, publicly called out Charnas in an Instagram post by accusing her of copying a Prada headband for her fashion line at Nordstrom.

In a series of photos, Diet Prada posted side-by-side images of Prada headbands and Something Navy headbands (including Charnas wearing her creation). “We saw you dodging mentioning Prada as the obvious inspo for the padded headbands in your Something Navy collection with Nordstrom lol,” the caption read. “We get it, not everyone has $240 to spend on one, and we’re well aware Prada didn’t invent them, but they definitely revived the trend after a certain Upper East Sider rendered headbands passe.”

Following the call out, Charnas’ personal Instagram was flooded with nasty comments. “Bye bitch,” one user wrote. “You deserve you’re baby’s thrown under a bus because as a mother you’re a $ hungry cunt and can easily breed you’re dirt hole for more.” (Just…. wow.)

Charnas, however, is no novice to cyber bullying. Since launching her blog a decade ago, she’s faced criticism for her slim physique — being called “anorexic” — and has clearly acquired a thick skin.

In other words, she knew exactly how to respond to the haters, and clapped back.

“You must feel good going to sleep every night knowing that you created the most negative platform on planet earth to rally up animals like this to go against someone who never claimed to reinvent the wheel, but instead take inspiration from street style and runway add twists to it and offer it to their followers who may not be able to afford the trendy high end pieces,” she wrote. “I’m sad, not by you calling me out on things that we made for Something Navy that are similar to designers I admire, but more so about the fact that you get enjoyment from this so call gang you created who are just so angry at the world.”

the diet prada vs arielle charnas drama ranges on: and includes threats against children, accusing the account of being based on tearing others down, and bad prada copies. thoughts? pic.twitter.com/bymqHy8Z6D

I’ll admit, even though I’m not a mom myself, at first I followed Charnas for her adorable kids. But after months of watching her navigate bumps in the road with Something Navy launches that went awry, as well as the trials and tribulations of motherhood, I grew to love her for her kind personality.

If you ask me, I think Charnas’ response to Diet Prada is just one example of many that illustrates the strong Jewish values her Israeli dad and Jewish mom imparted to her and her sisters. She treats others the way she’d like to be treated, has the courage to apologize and admit when she’s wrong. She’s also a fierce mama bear, and places her family above everything else (respect!).

It’s easy to dismiss influencers as money hungry mongrels who don’t give a shit about their followers, but Charnas’ presence was literally built on the authentic connection she shares with fans, and it shows.

“Imagine if I went through Instagram and posted influencers who stand outside on the street like I did for the last 10 years and made fun of them, their bodies, and told members of their family deserve to be thrown under a bus?” Charnas continued on her Instagram story. “My skin is thick, you can harass me all you want, will not stop me from what I’ve been doing for the last 10 years.”

Done and dusted? Not quite. Diet Prada continued the feud on their Instagram story, telling the Jewish mom that while they don’t condone the behavior of the Internet troll, they believed Charnas was deflecting the copycat issues they raised. And, monitoring comments on other people’s Instagram accounts isn’t their territory, they said. “With the exception of actual trolls, it’s not cool to call other Dieters ‘animals’ simply because they’re not cool with what you’re doing with Something Navy,” Diet Prada wrote. “In the same way that we’re going to keep doing what we do, you’re probably just going to keep on ‘twisting’ designer fashions, overproducing bad fits, and damaging the environment with all the returns/Nordstrom Rack overstock we’re hearing about.” Yikes!

Diet Prada may have a point in calling out Something Navy’s not quite original style, but that’s not for me to judge — especially since I can’t afford high-end designer clothing. (And, if I’m being honest, I wouldn’t pay $129 for a Something Navy faux leather jacket, either.) What I can judge is Charnas’ unbreakable spirit. I admire her positivity, and I’m in awe of the young mom’s resilience and exemplary attitude in the face of hate.