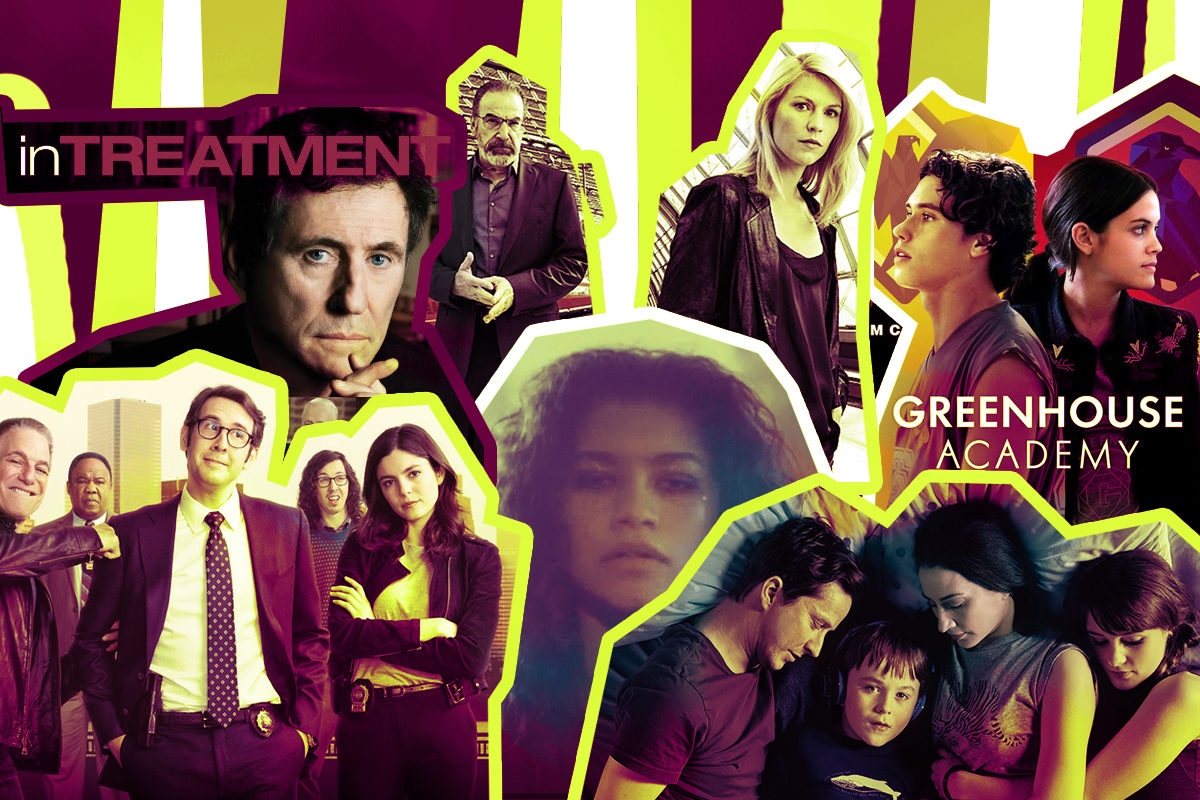 Despite smaller budgets and audiences, Israelis make some consistently excellent TV. It’s not something much of the internet knew about before the explosive popularity of Shtisel, an Israeli show from 2013 about an ultra-Orthodox family of the same name that swept Netflix viewers across the world after the platform made its two seasons streamable online.

But TV networks across the world have known about Israeli TV’s Midas touch long before Shtisel‘s sudden thrilling popularity. From England to the US, there have been many adaptations of Israeli shows for English speaking audiences, some to great success and some… well, I’ll be real, some were flops.

So for those of you always looking for something to watch, I’ve collected some of the Israeli shows that got American and British adaptations. Some are still running, some have been canceled but are still streamable, and there are also very exciting future adaptations that are really happening, unlike Emmis, the promised Amazon Prime adaptation of Shtisel, about which there is still no news. Sigh.

If you’re a fan of Atypical, The A Word, which is available on Amazon Prime, should be on your watchlist.

This BBC show is based on an Israeli show named Yellow Peppers. It’s about a family’s experience with learning that its youngest member has ASD (autistic spectrum disorder) as well as coping with their own social deficiencies. This show isn’t really so much about autism as it is about family, relationships, and communication.

Yellow Peppers was created by Keren Margalit, who is also the mother of a child with ASD, but while the show is inspired by some of her own experiences, it isn’t autobiographical. Though the one thing that both her son and Joe, the young child at the heart of The A Word, have in common is a keen sense for music. Margalit is also a writer and executive produce of The A Word, which means the show is pretty close to the Israeli original.

The A Word has two seasons, with a third one coming out in 2019. It stars some really brilliant British actors, like Christopher Eccleston, who you might know from Dr. Who and The Leftovers. It’s funny and heartfelt and really worth the watch.

This Netflix teen show has two seasons and has been renewed for a third. The show is about a private boarding school, The Greenhouse Academy (DUH!), which divides into two “houses,” a la Hogwarts: “The Eagles,” for its more athletic students and “The Ravens,” for the more cerebral ilk. It’s an adaptation of the Israeli show HaHamama, which aired from 2012 to 2016.

The cast has a lot of Israelis, including actress Ariel Mortman who plays one of the two main characters, Hayley Woods, who joins the academy with her brother after their astronaut mother dies in a spacecraft crash. Soon, the two discover, there’s a lot more to the school than meets the eye and things get pretty dark!

It’s a fun series to watch with your resident tween or teen.

Homeland, which is currently at its eighth (and last) season, is an adaptation of the Israeli show Prisoners of War (Hatufim in Hebrew), which is available to stream on Hulu (so is Homeland, with a Showtime subscription).

Quite like its Israeli counterpart, this show is (originally, at least) about a prisoner of war (Damian Lewis) who has been returned home, who it turns out is suspected to be a double agent.

But unlike its two-season-long Israeli variant, which focuses on the actual released POWs (in the Israeli version, there are actually three different soldiers), Homeland, which stars Claire Danes as CIA agent Carrie Mathison, has become its own beast, spearheaded by Danes’ complex character, and co-starring the brilliant Mandy Patinkin as CIA official Saul Berenson (seriously, could they have picked a more Jewish name?!).

One of the earliest Israeli adaptations that made it big in the US, In Treatment aired for three seasons on HBO and follows the plot of its Israeli counterpart, BeTipul, pretty closely.

It’s not surprising that there’s a super Jewish show about therapy, but BeTipul was quite a groundbreaking show in both format and subject matter in Israel, where therapy is still somewhat of a taboo. And I would argue that In Treatment was revolutionary to American TV, too.

Focusing on one therapist, his patients, and his own mandated therapy sessions, it’s a deep look into the mental health profession, which therapists have called surprisingly accurate.

This adaptation of the excellent Israeli TV show by the same name also met the terrible fate of many Israeli adaptations in this category: It was canceled after its first season by Netflix, which also streams its Hebrew counterpart. While it is not as wonderful as its Israeli equivalent, it does feature quite an excellent cast, including Josh Groban as a square, rule-abiding police officer and Toni Danza as his father, a disgraced dirty cop relegated to crashing his son’s couch.

The show also guest stars Bob Saget as a late night host, and is worth watching for its talented cast, though, unfortunately, really doesn’t shine like its Hebrew source of inspiration.

This is a Channel 4 (that’s British TV for you) adaptation of the Israeli show Mesudarim, the rough translation of which would be “set for life.” The show is about a group of friends who, overnight, become wealthier beyond their belief because their start-up sells, or as the Israelis say, they make an exit… Basically, the quintessential Israeli rags to riches story. It was, wait for it… wait for it… canceled AFTER ONE SEASON. And those British show seasons are pretty short, my friends. But to be fair to this adaptation, it’s actually pretty delightful and worth the watch. Luckily, the entire first season is streamable on Netflix.

This all-star cast adaptation of the Israeli TV show by the same name was canceled after just one season. It stars Toni Collete playing a doctor about to perform surgery on the President of the United States, whose family is taken hostage by a former FBI agent (Dylan McDermott). The only way she can release her family is to botch the high profile operation. DRAMA! As a big fan of Colette, I’m really sad this adaptation didn’t work out, but hey, we’ll always have season one.

Based on the Israeli show The Gordin Cell, this show is about a CIA agent whose life is turned upside down when he discovers his parents are covert Russian agents. It stars Gavin Stenhouse, Scott Cohen, Hope Davis, and Jewish actress Margarita Levieva (The Deuce). It’s actually a really enjoyable, solid adaptation, but again, unfortunately, it too was doomed to be canceled after just one season. Sad.

While this Fox adaptation of the international Emmy-winning Israeli show Ramzor, which means traffic light, was called “shockingly funny” and “anything-but-generic” by one reviewer, it too, is, unfortunately, part of the sad one season team. It tells the story of three friends, one married, one dating, and the other one single. Ramzor won an international Emmy. Surprisingly enough, the Russian adaptation of the show is about to air its 10th season (!).

Your Family or Mine

This adaptation of the Israeli hit show Sabri Maranan, which is still airing in Israel to this day, is no longer with us. It, too, lies in the big graveyard of shows that were canceled after one season. If you’re looking to a hint as to why, let me first explain: Sabri Maranan is about a married couple and their sometimes tense and always hilarious relationships with their in-laws. One family is Sephardi. The other, Ashkenazi. Your Family and Mine tells the story of a similar dynamic, except one family is WASP-y. And the other is…. Irish. Hm.

Luckily, the Greek adaptation of this show has been renewed for a 5th season.

This adaptation of a 2012 Israeli show is making the news, maybe because one of its producers is Jewish rapper Drake, or maybe because it stars Zendaya, Judd Apatow’s daughter Maude Apatow, and Storm Reid, the star of the A Wrinkle in Time movie.

Euphoria will premiere on HBO in June 2019. Its Israeli counterpart, written by author Ron Leshem and Daphna Levin, is a raunchy tale of drugs, sex, and crime among teenagers. Its main character, Ra’anan, is based on a teen with the same named who was murdered in 2004.

The American adaptation has been described as Trainspotting meets Kids, which I can say is a fair assessment of the Israeli original. If you’re looking for light teen escapism… don’t watch this show!

Starring Bryan FRIGGIN Cranston, this Showtime adaptation of the Israeli show Kvodo is definitely one to look forward to! The show, like its original, will be about a respected judge whose son is involved in criminal activity (in the Israeli show, it’s a hit and run, but in this adaptation, it looks like it will be the mafia). Its showrunner will be British TV-maker Steve Moffat, whose British thriller Criminal inspired the HBO hit The Night Of.

It’s bound to be a dark, complex drama, like the kind Cranston has recently been known for.