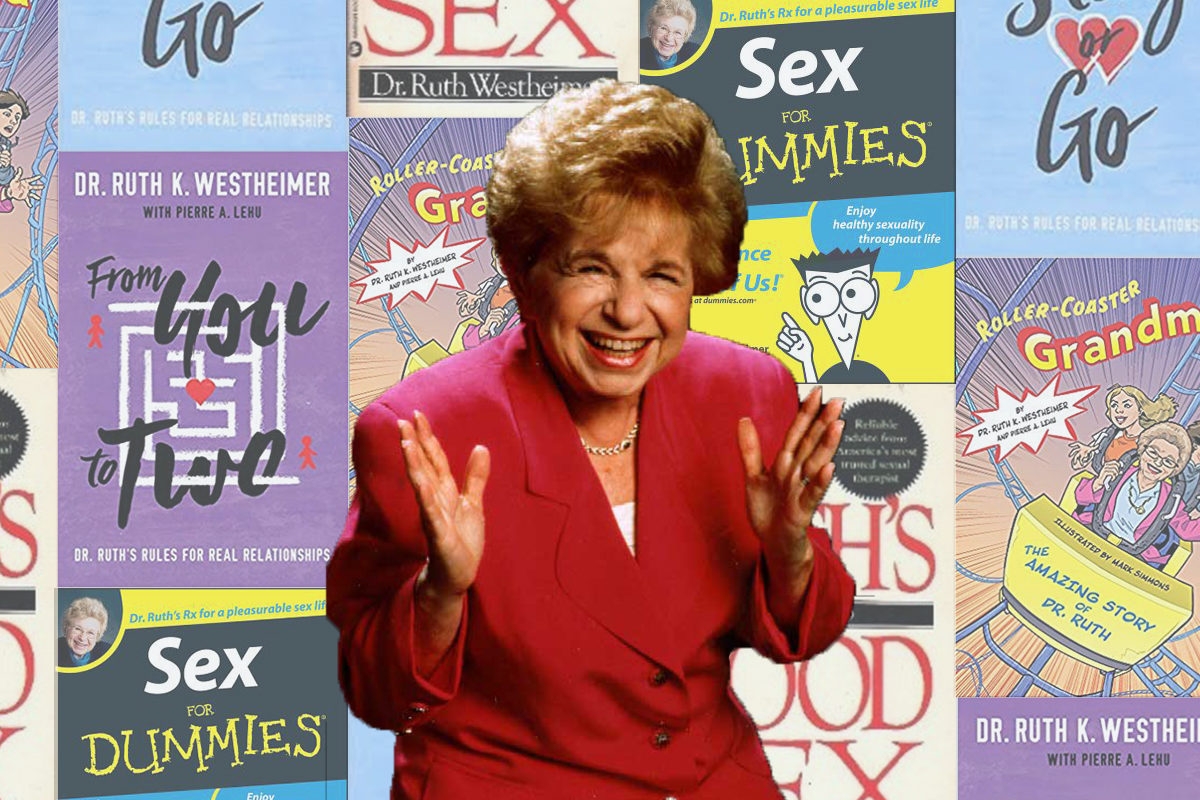 Then again, according to Westheimer, 91, who is known to everyone as Dr. Ruth, “Everything is normal.”

When she entered the public sphere in the 1980s with her radio show, Sexually Speaking, talking about sex and normalizing taboos was basically unheard of. She was met with immense criticism from people who thought she was blasphemous, or gave out advice too frivolously. But as a Jewish immigrant who prioritized education, nothing could stop Westheimer from preaching sex-positive gospel.

Her charisma belies her short stature — when Westheimer talks, people lean in to hear her say things like, “short people make the best lovers” (something we here at Kveller wholeheartedly agree with!) or “size doesn’t matter.” With her thick German accent, she became a vocal and formidable figure during the AIDS epidemic, and she fought homophobic misinformation by educating people about the disease. She also fought for a woman’s right to abortion, and became the point person to ask things no one dared ask anyone else.

Just how did a Holocaust survivor wind up being one of the most famous sex therapists in the world? Well, a new documentary, Ask Dr. Ruth, now streaming on Hulu, unpacks the myriad fascinating tidbits of her unlikely journey from sniper — really! — to sex therapist. Naturally, we rounded up some of the most remarkable facts about Westheimer’s life and work. Read on for 16 of them.

1. Dr. Ruth K. Westheimer was born Karola Ruth Siegel in Germany in 1928. When she emigrated to Israel (Palestine at the time) after World War II, there was so much hatred towards Germany that Westheimer changed her German-sounding name. She used her middle name, Ruth, with the hope that if her parents or other family members survived the Holocaust, they could still locate her. In a particularly moving scene of Ask Dr. Ruth, Westheimer learns that her father died in Auschwitz.

2. Since emigrating to the United States in 1956, she has lived in the same apartment building in Washington Heights, New York. When asked if she wanted to move, following her fame, she said: “This is a neighborhood of immigrants, and I said, ‘No, I’m very comfortable here.’”

3. She first had sexual intercourse when she was 17, “on a starry night, in a haystack, without contraception.” She later told The New York Times that she was “not happy about that, but I know much better now and so does everyone who listens to my radio program.” What’s spicier is that the man Westheimer had sex with was her ex-boyfriend’s younger brother.

4. When she moved to Israel, Westheimer joined the Haganah (now known as the IDF) and trained as a sniper. She nearly had her legs amputated after being caught in an explosion during the 1948-1949 Palestine War. Always on brand, while recovering in the hospital, Westheimer pretended that she couldn’t use her arms — only her legs were injured — so that the hot doctor would feed her.

I don't consider Swiping to be part of Foreplay.

5. She was married three times, but the last one was the “real” one, she said. Her first husband was the man she lost her virginity to in Israel; they divorced because she wanted to study in France. While there, she got pregnant with her daughter, Miriam, and married a second time. The third time was the charm — she married Fred Westheimer (whom she met skiing in the Catskills!) in 1961 and the pair remained together until his death in 1997.

6. She was a single mom. It’s fitting, really, because Westheimer was always ahead of the curve! In the 1950s, single motherhood was very taboo. It didn’t last for long, though. Once she married a third time, the Westheimers had a son, Joel.

7. While giving a talk at Oklahoma State University, an attendee tried to make a citizen’s arrest for obscenity.

8. The only possession she has from her parents’ home in Frankfurt is a washcloth with her name embroidered on it. She always keeps it by her, and never forgets where it is. “It kind of links me to my past,” she said.

9. When she was 10, her parents sent her to an orphanage in Switzerland on the Kindertransport. “My parents gave me life twice,” Westheimer. “Once when I was born, and once when they sent me to Switzerland.” There, she helped to take care of the other orphans.

10. In addition to two children, Westheimer has four grandchildren. As a rule, she doesn’t talk about sex with any of them.

11. Despite the wishes of her granddaughter, Leora, Dr. Ruth doesn’t call herself a feminist. What she will agree to is that she’s a “non-radical feminist.”

My granddaughter Leora made Phi Beta Kappa at Barnard. Feeling so proud.

12. She also doesn’t call herself a Holocaust survivor, because she never endured the pain of living in a concentration camp. “I call myself an orphan of the Holocaust,” she said.

13. There’s a mundane Hebrew word that means a lot to her: lada’at. It means “to know,” but it also means “to have sex.” In the documentary, she said: “It’s wonderful because the word sex means to know each other, and it means to take the time to listen and talk to each other. By not having parents at the age of 10, I was very much aware of the importance of being touched, and being loved. So that’s one of the reasons I became so interested in the issues of the family, and relationships, and then, eventually, of sexuality.”

14. Education as a Jewish value was of the utmost importance to Westheimer. In the documentary, she said being forced to make big decisions early in life taught her that women need to take initiative. A major component of that included financial independence — which meant that Westheimer needed to get a job. After the war, when Dr. Ruth emigrated to Israel, she was allotted reparations in order to afford school. So she flew to France, got her degrees focusing on marriage and family planning, schlepped to the United States, and worked at Planned Parenthood. It was there she realized she needed to learn more about human sexuality so she could answer people’s questions.

15. Sexually Speaking, her first radio show, debuted in 1981 and catalyzed the sex therapist’s tremendous career. The show was more successful than expected — she initially hosted it as a volunteer from Cornell Medical Center, but it was shortly renamed the Dr. Ruth Show. Mostly all of her following shows — Ask Dr. Ruth, The All New Dr. Ruth Show, to name a few — included her name in the title.

16. She has written more than 40 books, and counting! She published three books in 2018, and her latest children’s book, Crocodile, You’re Beautiful! Embracing Our Strengths and Ourselves, comes out this August.