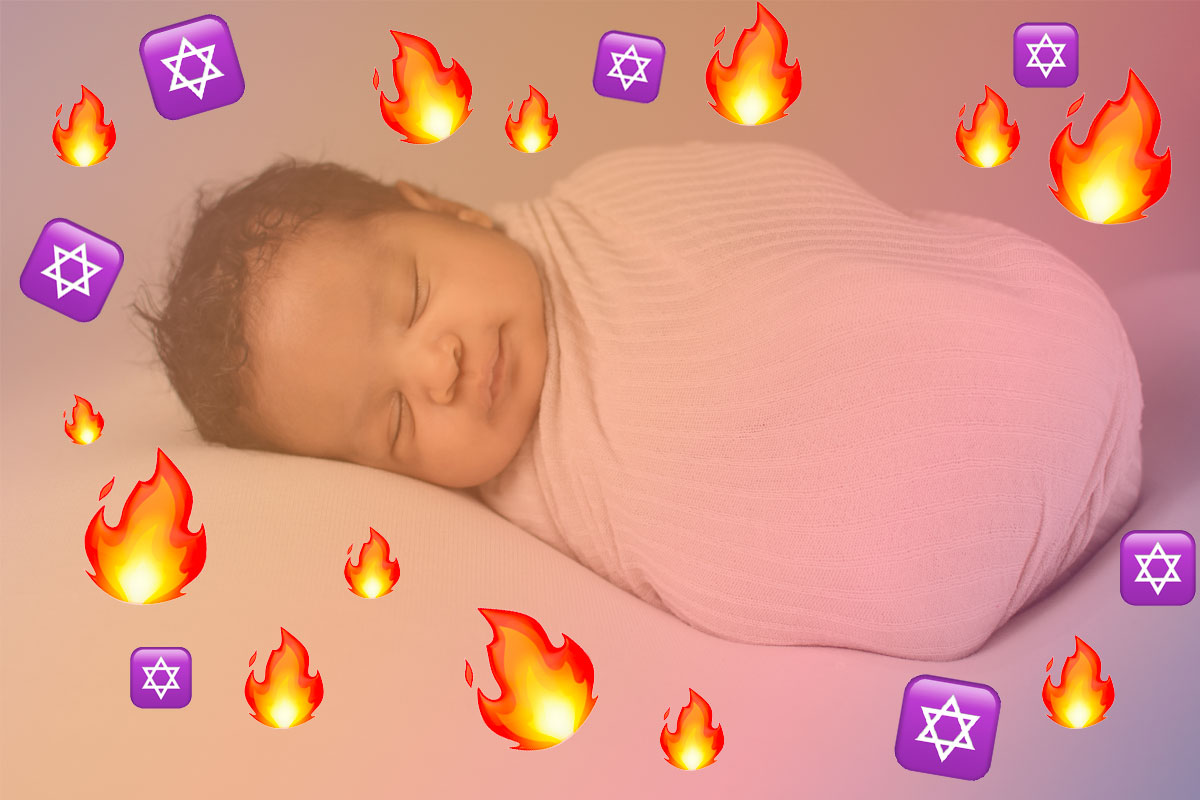 Much like the spark of a flame, a new baby brings light and warmth into the lives of expecting parents. And for Jews, this feeling is made extra special due to the deep, spiritual connection to fire and light within Judaism.

At the end of each week, we find solace and rest in the light of the Shabbat candles. During the Festival of Lights, we once again turn to candles to honor the miraculous Hanukkah oil. And in the sanctuaries of our synagogues, the Ner Tamid (eternal flame) hangs above the ark to represent God’s everlasting presence in our lives.

In the Hebrew tradition, there are plenty of Jewish names which honor this fiery aspect of Judaism — maybe one of them will be perfect for the newest addition to your family. See our list of 20 fire-inspired Jewish baby names below.

Akiva – This male name of Hebrew origin comes from the verb “to follow.” It could also honor Rabbi Akiva, a Jewish scholar from the 1st and 2nd centuries. Famously, Rabbi Akiva refused to follow the Roman prohibition on teaching the Torah and was martyred via flaying with hot irons.

Avner – Avner is a Hebrew name for boys meaning “my father is my light.” In the Torah, Avner was a general to King Saul. The more you know!

Moshe – Though Moshe (Moses) is a Hebrew name meaning “drawn out of water,” the biblical Moshe also has a connection to fire. You may recall from your Hebrew school days that Moshe spoke to God for the first time through the burning bush!

Neri – Meaning “my candle,” Neri is a Hebrew name for boys.

Uriel – Uriel is a male name of Hebrew origin that means “fire of God.” It’s also the name of a biblical angel and could be the perfect way to inspire your little one to be extra angelic.

Yair – A Hebrew name for boys, Yair means “he will illuminate.” With a name like this, your son Yair could be a budding scholar!

Ziv – Ziv is a Hebrew name for boys that means “light,” “brilliance” or “glow,” and it’s the masculine version of the name Ziva.

Lior – This unisex Hebrew name means “I have a light.” Lior is also the name of Kveller’s Deputy Managing Editor, so we’re a little biased, but we think it’s a lovely name for your child of either gender!

Or – Or is a Hebrew name that means “light” and it’s a perfect gender neutral name. FYI: Babies born around Hanukkah are typically given names having to do with light.

Orel – Orel is a unisex Hebrew name that means “light of God.”

Uri – Uri is a unisex Hebrew name that means “my fire.” If you like the sound of the name “Uriel” but want something slightly shorter and less masculine, Uri is a great choice.

Zohar – Zohar is a unisex Hebrew name that means “light.” In the Jewish mystical practice of Kabbalah, the Zohar (not to be confused with the Zohan, a character created by Adam Sandler in the 2008 film “You Don’t Mess with the Zohan”) is an important piece of literature.

Golda – This Hebrew name for girls means “gold,” an element which shines just as brightly as a flame. It also honors the first and only female Prime Minister of Israel, Golda Meir.

Keren – Meaning “ray of light,” Keren is a female Hebrew name. You can also spell this name “Karen,” but since that name has now become associated with entitled women, it’s perhaps best to stick with more Jewish spelling.

Leora – Leora is a Hebrew name for girls meaning “my light.” It’s also the name of Israeli-Indian singer Liora Itzhak.

Noga – Noga is a Hebrew name for girls that means “sparkle” or “brightness.” It’s also the name of the ultra-cool alternative Israeli singer-songwriter Noga Erez.

Ora / Orit / Orly – Ora, Orit and Orly are Hebrew names for girls that mean “light.” They are the feminine versions of the Hebrew name Or.

Shalhevet – Shalhevet is a Hebrew name for girls that means “flame.”

Ziva – Remember Ziv from earlier? Ziva is the feminine version, a Hebrew name for girls that means “light,” “brilliance” or “glow.” Alternatively, you can spell this beautiful name “Zivah” or “Zeeva.”