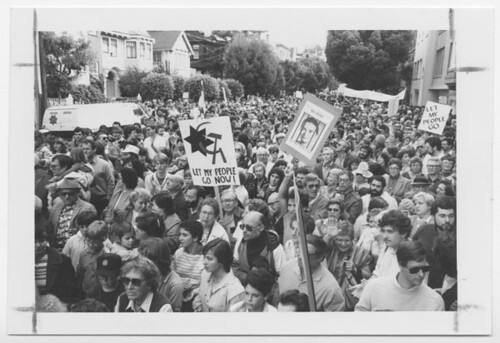 Exactly 50 years ago, on May 1, 1964, in New York City, a group of activists put together the first “Free Soviet Jewry” rally. I wasn’t born yet (I’m not being coy; I’m 44, for anyone who’s interested), but it was the ongoing, untiring effort of that movement that led to my parents and I immigrating to the US from Odessa in 1977, and the rest of our family coming over throughout the 1980s.

Once in America, I participated in numerous protests myself. As I wrote for Kveller earlier, though I enjoyed myself at the time, as a parent I am loathe to let my kids be used as photogenic political symbols before they are old enough to decide for themselves whether or not this is a cause they want to be associated with. On the other hand, I do want to convey to my children just how important the work of those demonstrators 50 years ago was. And not just for the obvious reasons.

Ultimately, I ended up in the United States due to the Jackson-Vanik amendment, which was the work of the government. But the government was pressured into passing the amendment due to the “Free Soviet Jewry” movement.

These were people who took up a cause that didn’t affect them directly (true, some were fighting for specific relatives, but for most it was all in the interest of total strangers). Their actions weren’t as dangerous as, say, hiding Jews from the Nazis during World War II or going down South to help register African-American voters 20 years later (though some people did put their lives at risk when they traveled to the USSR and met in secret with Jewish refusniks who were constantly under KGB surveillance).

Then again, Nazism and Jim Crow were rather blatant evils. There was no ambiguity to them. They were simply wrong–no ifs, ands or buts.

The situation in the Soviet Union wasn’t nearly as clear-cut. For one thing, I’d be willing to bet that many of the people who protested with such vehemence against the USSR in the 1960s and 70s were once Red Diaper babies, American children (often Jewish) raised by parents who supported Leftist and Socialist movements and cheered the original creation of the first Communist state. (Many of them changed their minds after Stalin signed a non-aggression pact with Hitler, then changed back when the US fought alongside the USSR against Germany. Nobody ever said being a true believer was easy.)

Furthermore, the USSR was not killing Jews en masse ala Hitler. They discriminated against Jews, certainly. Many Jews were denied housing, jobs, university places (hence the infamous Jewish Problems math exam). But some, the token few, were not. Plus, life in the USSR wasn’t exactly a picnic for anyone (save the elite, of course, who assured the populace that they were living the high-life strictly for the benefit of the masses). Other ethnic groups were also being discriminated against. The biggest formal offense at the time was the USSR either not letting Jews emigrate at all, or charging them a special tax, demanding the government be paid back for the money it had invested in the potential refugees’ education.

Because the situation of Jews in the USSR was not as dire and dramatic as others around the globe, I can imagine Americans choosing to expend their organizational energy elsewhere–and with just cause, too.

But, they didn’t. The founders of the Soviet Jewry movement overcame, first and foremost, normal human inertia. Next, they were able to convince others that getting permission for Soviet Jews to immigrate was a cause that warranted their time, energy and money. And then they proceeded to spend said time, energy and money all for the benefit of people they didn’t know. Somehow, I find that even more impressive than fighting for a more immediate, pressing cause.

Let’s face it: It’s easy to get fired up over an injustice happening right in front of you, where action needs to be taken immediately–or else. It’s why flash fundraising campaigns after a disaster resonate so strongly. People are much more likely to donate to The Red Cross when they see victims of Hurricane Katrina or the 2004 Tsunami. And then they promptly forget about it and go on with their lives. That’s okay. It’s how human beings are wired.

The organizers behind the Soviet Jewry movement didn’t have a flashpoint event (even the well-known dissidents: Sharansky, Nudel, Begun were imprisoned for years) to rally the troops behind. Instead, they worked consistently, systematically, celebrating their small victories alongside the inevitable setbacks, and pressing on for over twenty years until not just the ban against Jewish immigration, but the entire Soviet Union collapsed from its own dysfunctional weight (we can talk about what’s going on in Russia and the Ukraine now in another post.

I use the history of the movement to talk myself down and pep myself up when I grow impatient or frustrated with some project I’m working on, and I feel like I just want to chuck the whole thing. Or if I start to think that there’s something more important I could–and should–be doing.

If the “Free Soviet Jewry” founders had felt that way 50 years ago, I don’t know where I’d be today.

Which is why it’s a lesson I want my kids to carry into whatever battles they might choose to fight down the line, and throughout their entire lives, to boot.