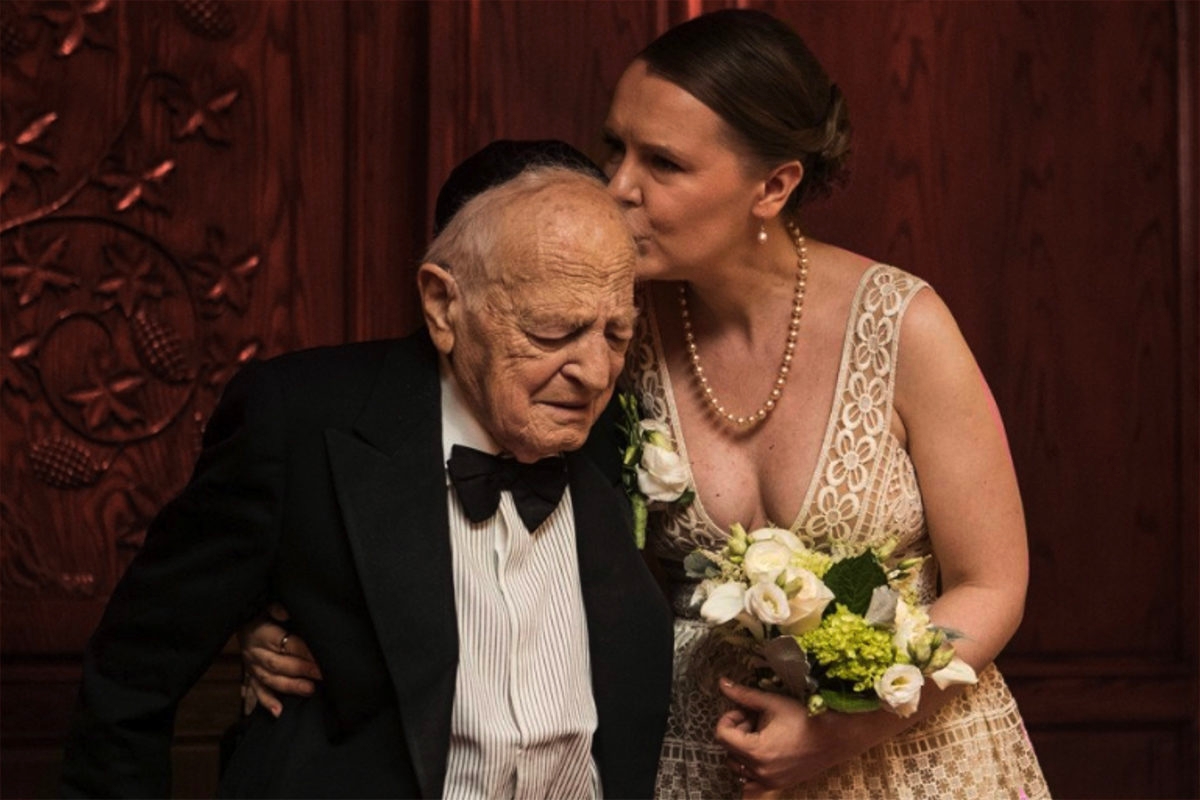 Talk about a one-of-a-kind wedding!

89-year-old Jack Garfein, a Holocaust survivor and a theater legend, married 42-year-old Natalia Repolovsky, a technical writer and piano teacher at the Rodeph Sholom Synagogue in New York, this past Sunday. The groom wore a fine suit, with a striped shirt and bowtie, and the bride wore a beautiful embroidered dress, with a pearl necklace and earrings.

The couple may have almost half a century between them, but they also have a lot of love, with a verklempt Garfein telling the New York Post after the ceremony, “I can’t believe all of this love I’m surrounded by after everything I’ve gone through in my life.”

Repolovsky told the Post that “Jack made me realize who I was because I was looking at myself through the eyes of someone who loved me.”

The couple has been together since 2012, the year Repolovsky arrived in the U.S. from Russia. Apparently, she fell in love right away. The night after they met at a social gathering, she recalls thinking: “God, I can’t believe you sent me an 82-year-old man to fall in love with. I’m only 36.”

They got engaged in 2016. According to the New York Post, it was quite the romantic proposal: “I just told her ‘I can’t live without you. Will you marry me? She said, ‘Of course I will. What took you so long to ask?’” The couple wanted to marry soon after the engagement, but unfortunately, Garfein contracted pneumonia and they had to wait for his health to improve to tie the knot.

Garfein has had a storied life. He was born in former Czechoslovakia, the son of a family with a lumber business. He survived 11 concentration camps, including Auschwitz (he visited the camp in the documentary, The Journey Back). He lost his parents and sister to the gas chambers.

He came to America as a teen and was one of the first five survivors who came to the country, where he joined an uncle who lived in New York. Despite coming to the country with little knowledge of English, he became one of the more prominent figures in the acting world, producing and directing plays by the likes of Arthur Miller and Eugene Eunesco, as well as directing two movies. He worked with the likes of Marilyn Monroe, Marlon Brando, and Elia Kazan. He gave James Dean his first acting role and even discovered the legendary Steven McQueen!

Garfein has been married twice before, once to legendary actor Carroll Baker, who converted to Judaism. They had two kids, Emmy award-winning actress Blanche Baker, and Grammy award-winning composer Herschel Garfein. He also has two children, Rela Garfein and Elia Garfein, from his second marriage to Anna Laretta. This is Repolovsky’s second marriage.

While some might raise their eyebrows at this new and unusual union, there was certainly a lot of love and support at Rodeph Sholom that Sunday. Garfein’s daughter-in-law, the wife of son Herschel Garfein, Vicki, told the Post, “They truly love each other. A love like Jack and Natalia’s is rare. I’m happy for them. Love is love.”

Indeed, love is love — we wish the couple a hearty mazel tov!