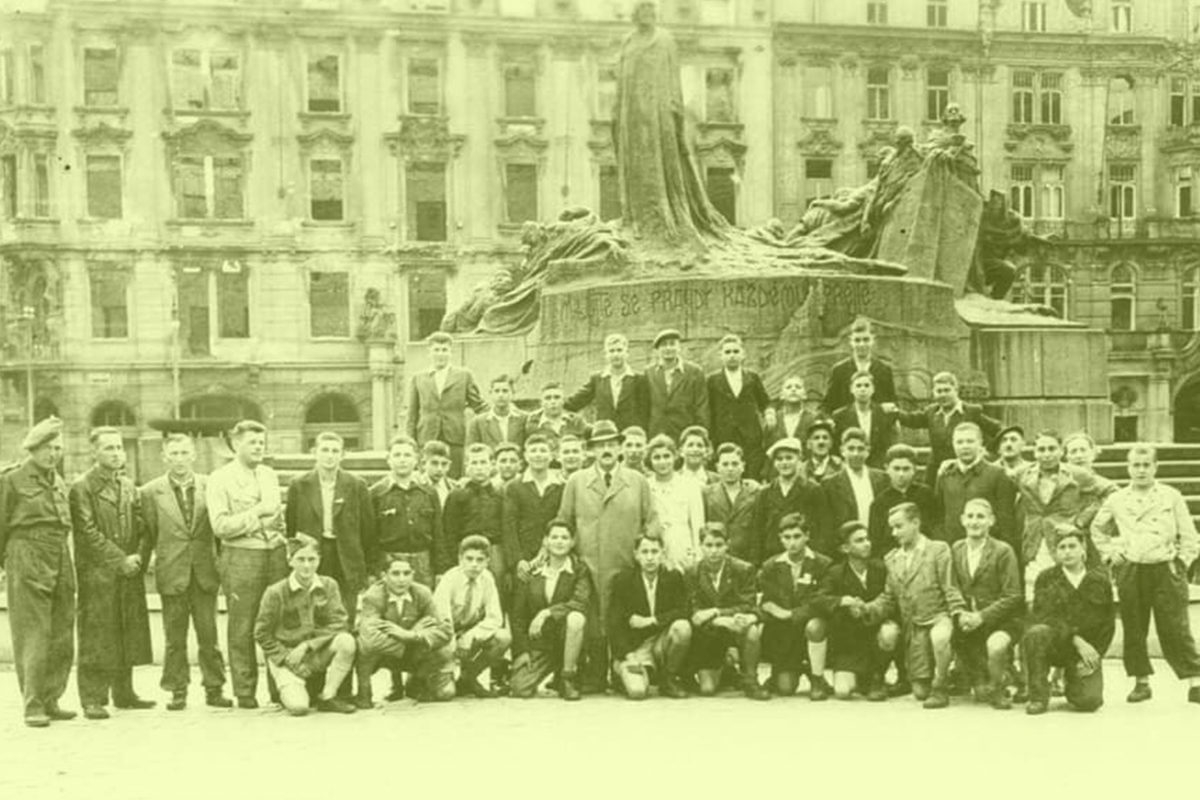 In the heart of the Old Town in Prague, Holocaust survivors and four generations of their families — 250 people, in total — recreated an iconic photograph that was simultaneously chilling and heartwarming.

Nearly 74 years ago, 300 girls and boys were liberated from a concentration camp in Czechoslovakia. The orphans were flown by the U.K.’s Royal Air Force to Prague, where they took a photo in front of the Jan Hus memorial. After six months in the Czech capital, the children were relocated to Windermere, in the Lake District of northwestern England; the survivors became known as “the Windermere Boys.”

And now, decades later, six surviving members of “The Boys” returned to that same statue on May 12, along with relatives of those survivors who have died. Together, they recreated the black and white photograph they first took in 1945.

The reunion was spearheaded by Lake District Holocaust Project — an organization dedicated to telling the story of the Windermere Boys.

Among the generations of Holocaust survivors in the photo is celebrity TV Judge Robert Rinder — whose show is considered the British version of Judge Judy — whose grandfather was one of the original orphans. “Tonight I accepted a BAFTA in the country that gifted these refugees safety and life,” Rinder tweeted. “This is who we are at our best.”

This morning I stood alongside the descendants of 732 child survivors of the holocaust in Prague. Tonight I accepted a BAFTA in the country that gifted these refugees safety & life. This is who we are at our best. pic.twitter.com/obJ73O0yFv

One of the survivors, Sir Ben Helfgott, 89, told the Jewish News he felt “overwhelmed with emotion” as the photograph was taken.

His younger sister, Mala Tribich, said she felt sad thinking about the survivors they lost, and what the reunion would have meant to them. “But I also feel positive and upbeat,” she told Jewish News. “Today represented survival: the survival of the net generation and all the generations that have come since.”

WATCH How it was done: photoshoot in Prague recreating Windermere Boys' group picture from 74 years ago, before they flew to a new life in Cumbria. @45AidSociety @BBC_Cumbria pic.twitter.com/Stv5WeHUAn

“Sadly, we are probably the last generation who will meet these Holocaust survivors, and so it falls onto our shoulders to carry on their stories,” said James Gordon, 19, a relative in attendance. “We are stood here today to secure their legacy.”

May the legacy of the survivors and those who perished live on, and may we never forget.