A Llama, a Mama, and a Kindergartner's Theological Drama – Kveller
Skip to Content Skip to Footer

A Llama, a Mama, and a Kindergartner’s Theological Drama 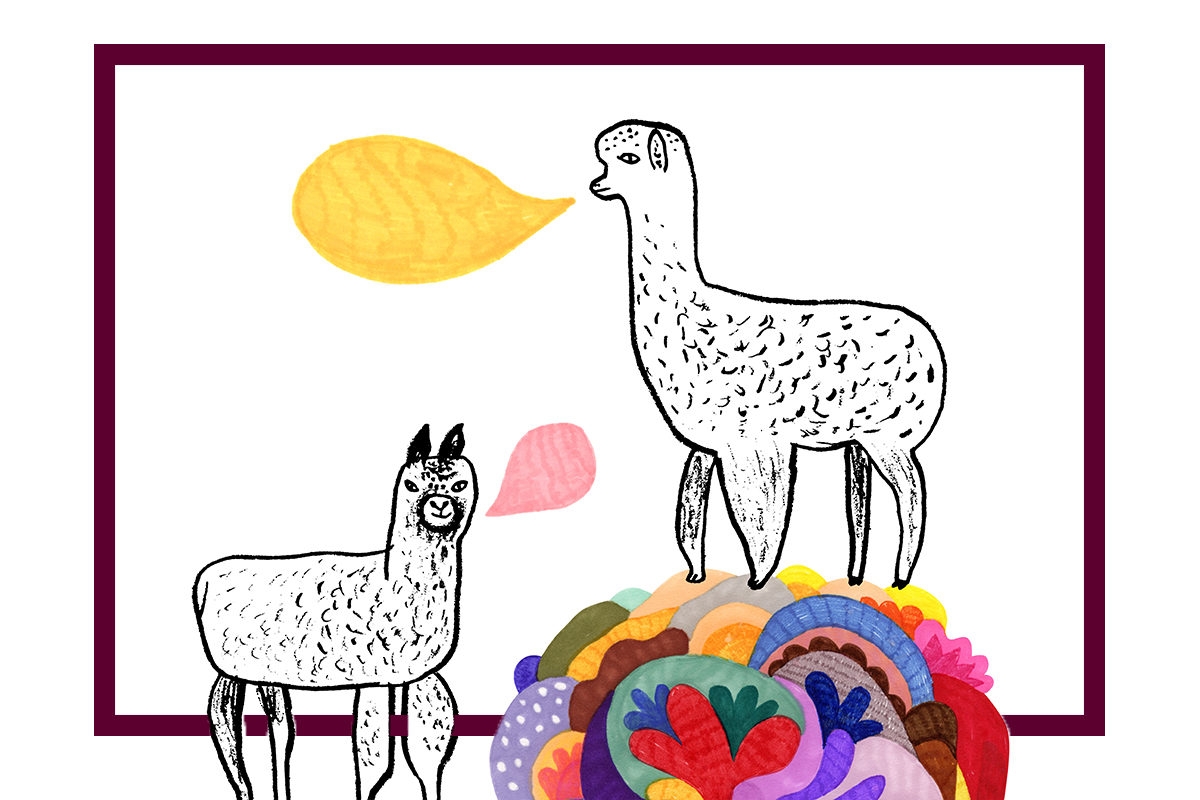 My husband and I make up stuff all the time and tell it to our kids. Sometimes it happens on the spur of the moment — one of us will invent something, and the other just knows to go along with it.

Take one of our greatest inventions: the crosstown llama. It all started about three years ago, when our family was walking on the Upper East Side one Sunday afternoon. At the time, our son was almost 5, and our daughter was just over 1. Humor was the only thing keeping us going some days — even if it was bad humor that only the two of us appreciated.

My son asked about the best way to get to the West Side. “We could take the bus,” I improvised, “or the crosstown llama.”

Like a well-oiled machine, my husband jumped right in. “Yeah, the crosstown llama,” he said. “Let’s see what comes first, the M86 or the crosstown llama.” As most Manhattanites know, you actually might spot a llama before you see a crosstown bus on the weekend — so, really, anything was possible.

My son stopped and looked at me. “There’s no such thing as a crosstown llama,” he said. “Right?”

“Well, there could be,” I replied. “Let’s see what happens.”

Eventually, however, the bus showed up. My son was disappointed because it would’ve been really cool to see a llama. He believed us, sort of. He knew his parents were probably just being silly (again!), but why risk it? There could be llama.

The crosstown llama became a running joke in our family. We exchanged cards on birthdays with llama pictures, we referenced it when making travel plans, and wondered aloud about the llama’s availability for babysitting.

Meanwhile, our son grew older, and started kindergarten at a local Jewish day school. Prayer and discussions about God were a part of the curriculum, and the conversations about God continued at home.

Our typical dinner and bedtime conversations — monologues, really — began like this: “Where is God? I know God is everywhere, but is God everything? Am I God?”

Or, “I think the dinosaurs were God’s parents.” Yay, evolution and science playing with theology, I thought.

“I know I can’t see God, but maybe I can and I can talk to God, too, and say thank you.” Good application of the prayer curriculum, I thought.

And the trickiest one : “I think we should take the M14 bus. Maybe one will be there. Oh! One showed up! Thanks, God!”

My Conservative rabbi senses went all weird on that one. “God didn’t send the bus,” I tried to explain. “God does other stuff… like… OK, if you want to thank God for the bus…that works, OK.” This particular conversation took place walking down the street, as I’m trying to reconcile my personal theology with my son’s budding theology, while meanwhile trying not to sound like people who talk about God all the time. Even though we are.

My kids know that Judaism is a big part of their lives. Mommy is a rabbi and daddy is a lawyer; Daddy likes to read Torah at shul, and Mommy is a rabbi everywhere but is not the rabbi on the bimah at our shul. Kippot, tallitot, Shabbat, and our synagogue all are major parts of their lives, as familiar to them as their favorite blankies and favorite playgrounds, part of our weekly rhythm. Judaism is something my husband and I created for them and made happen on a daily basis.

Yet examining God’s presence in their lives, and talking about God at such a young age was unexpected. I did not anticipate the depth of theological discussions from my son that year. It’s a gift that continues to keep us on our toes and examining our faith.

Now, back to the crosstown llama.

This running joke grew to represent how I viewed my kindergartner’s forays into theology. Just because we can’t see something, it doesn’t mean it can’t exist. My son believes in a giving, caring God. He believes that God exists, even though he can’t see God and doesn’t have the words or thoughts to fully comprehend concepts like “omnipotent” and “omnipresent.”

How do I explain God to a 5-year-old? How do I explain something I — his mom, the rabbi — doesn’t fully understand? I can look for answers to his science questions on hundreds of web sites. I can open a calculator app on my phone and figure out the complicated math questions he asks. But when he asks why he can’t see God, or when God’s birthday is, I just don’t have a definitive answer.

My understanding of Judaism, my faith in God, is not based on tangible things or clear answers. It’s a long, complicated path that I now know will continue to change, and a piece of it is based on my willingness to be OK with not having an answer, as well as accepting that some things are simply not known.

In some ways, thanks to his weird parents and an open-minded prayer curriculum, my son is already learning that. So, thank you, crosstown llama. Whether or not you arrive, you’re part of the journey.