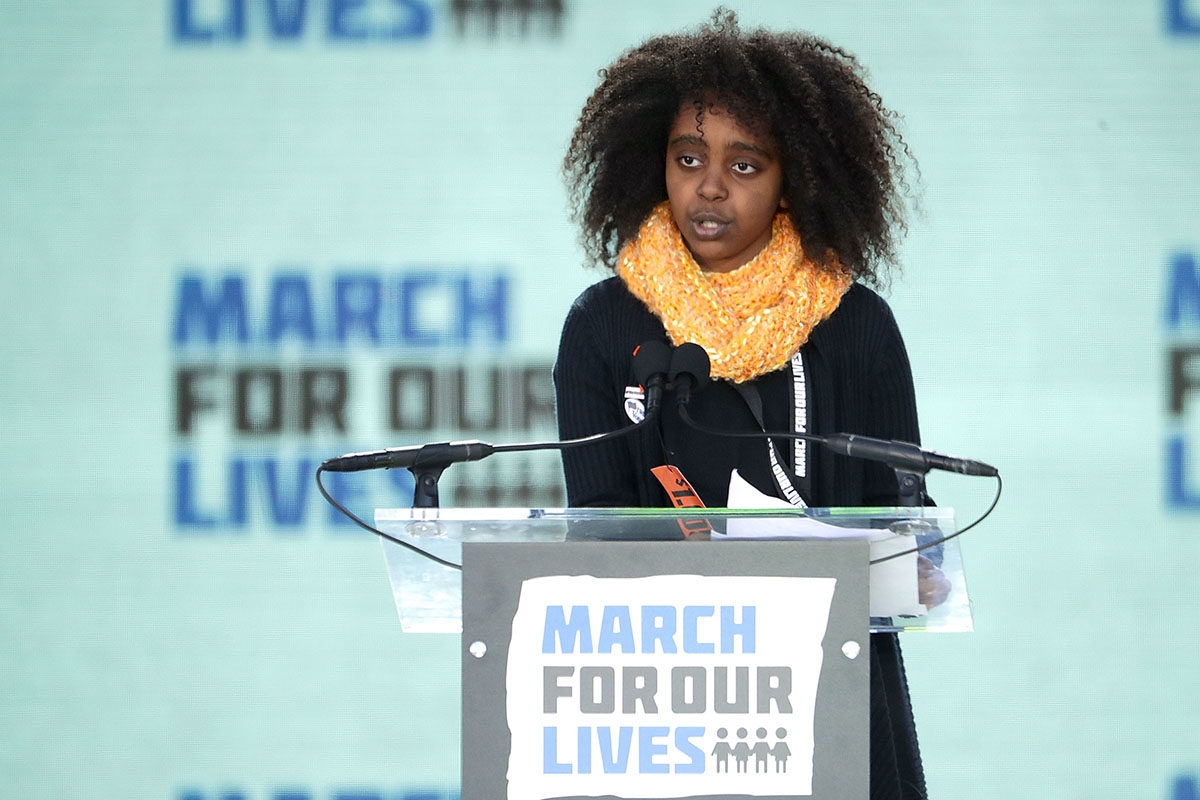 Naomi Wadler made serious some waves in March 2018, when she was the youngest speaker at the March for Our Lives in Washington, D.C.

Wadler, who was then all of 11 years old (!!), told the crowd: “I am here today to acknowledge and represent the African American girls whose stories don’t make the front page of every national newspaper, whose stories don’t lead on the evening news. I represent the African American women who are victims of gun violence, who are simply statistics instead of vibrant, beautiful girls full of potential.”

Since her powerful speech at the march, Wadler’s activism has continued. She has opened up about the discrimination she’s faced for being Black and Jewish. She was named one of Teen Vogue’s 21 under 21. She even shared the cover of New York Magazine with no less an icon than Barbra Streisand!

Walder was born in Ethiopia; her mom, Julie Wadler, who is Jewish, adopted her from an orphanage in the capital city, Addis Ababa, in 2007. (In 2009, she adopted a second daughter from Ethiopia, named Sarah.)

I am black. I am an immigrant. I am a Jew. I have an opinion. And I am not going anyplace. Get used to it. #BlackGirlMagic

As Susan Baer wrote in The Washingtonian in August, Wadler and her family are working on finding the balance between her newfound stardom and just being a normal middle schooler. And you know what’s totally “normal” for a middle school girl?  Celebrating her bat mitzvah! Naomi turned 13 in October, and celebrated her bat mitzvah on November 23.

Ah the teen years! @NaomiWadler is 13 today. My sweet, opinionated, strong willed, sensitive, beautiful girl is growing up. The days are long, but those years are so short. pic.twitter.com/dxJXjsYOPs

In an interview with The Lilly, Walder talked about spending the summer reading, working on math, preparing for her bat mitzvah, and, in true tween form, trying to get her mom to give her control of her social media. She said, “Actually, I don’t manage my social media, my mother does. I’m trying to get her to turn it over to me for my 13th birthday.” (We wonder if that switch happened yet!)

Naomi’s social media hasn’t posted about the day, but many guests have:

Thanks for inviting me to celebrate this beautiful transformational moment in your life. You make me so proud of you and you know I’ll be in your corner forever.

Continue to inspire the world + keep reaching towards the sky butterfly! pic.twitter.com/wGZipGZQAT

Naomi replied to his tweet, “Thank you so much for coming. You’re the best.”

Mari Copeny — known as Little Miss Flint, due to her activism regarding the Michigan city’s water crisis — attended, and posted on Instagram, writing, “So happy I got to spend the day with you.”

@naomiwadler bat mitzvah was amazing. So happy I got to spend the day with you.