Anne Hathaway Plays a Jewish Mom in This Upcoming Biopic 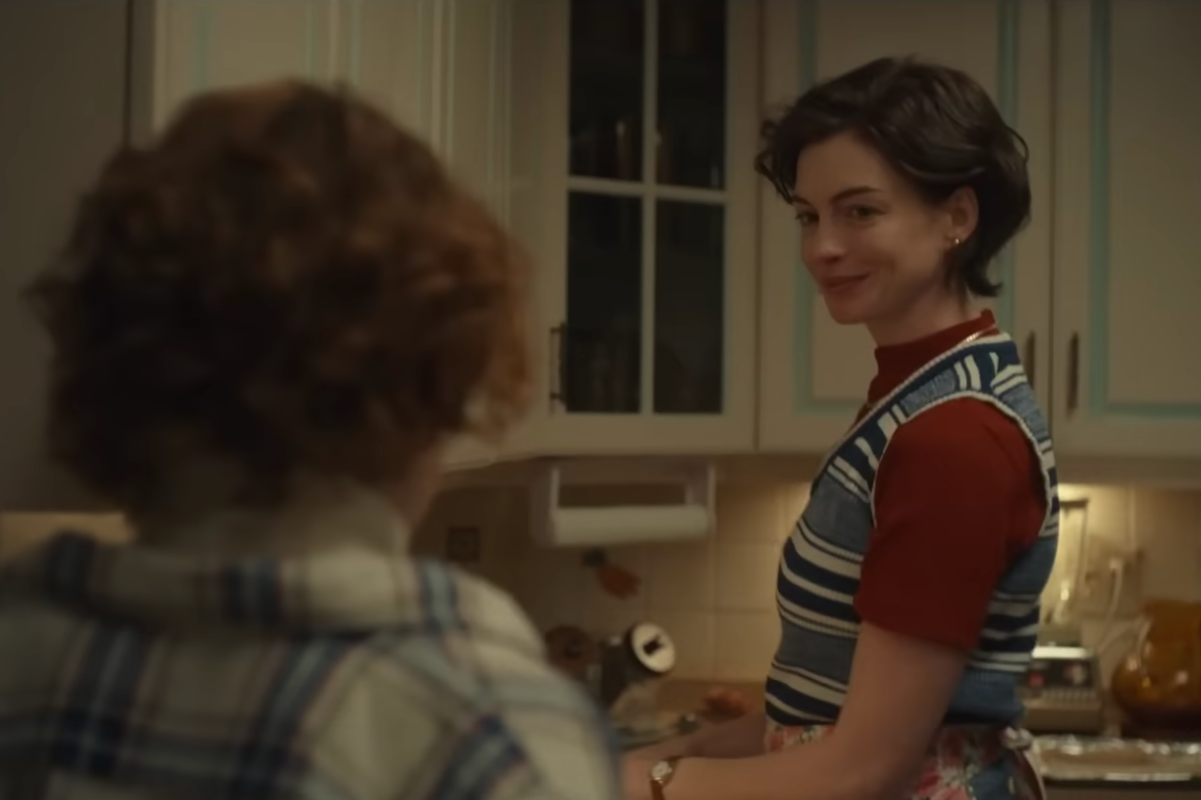 Hopkins, who has played both Adolf Hitler and Israeli prime Minister Yitzchak Rabin in TV movies (what a feat!), plays Aaron Graff, the grandfather of 12-year-old Paul Graff, played by Banks Repeta, who in the film is a stand-in for Gray himself.

In the movie, Aaron encourages his grandson to be an ally to Johnny Crocker, played by Jaylin Webb, a Black kid from his school. Webb’s character is based on a real life friend of Gray’s who was killed in the 80s. “I loved that kid! Here’s the thing: I never had a ton of friends. I loved him,” Gray said at the film’s recent premiere at the Telluride festival.

Anne Hathaway, herself a mother to two Jewish kids, with whom she celebrates every Jewish holiday, continues her streak of complex Jewish mothers in film — she previously played Rebekah, the wife of WeWork Adam Neumman in Apple TV+ show “WeCrashed”. Hathaway, who adopts a heavy Jewish New York accent for the role, plays Paul’s mother, who tells him to stay away from Johnny after the two get in trouble at their school. When her son asks her for the reason, she simply says — “you know why.”

In certain ways, she seems to be the stereotypical overbearing Jewish mom — “you are going to college,” she tells her son. Yet, later in the trailer, you see her cry and hug her child — “all my hopes are with you and your brother, you are my whole life,” she professes.

“The hand of a Jewish mother will guide the rest of my life, if I have done one thing and it is to capture that love, I honestly won’t even attempt to put it into words,” she added.

Jeremy Strong, who is not Jewish but does feel like he was meant to play a Jewish dad, plays Paul’s father in the movie. Like his mother, he urges him to do what’s best for himself and build a better future — “I want you to be a whole lot better than me,” he tells his son. “Life is unfair, be grateful when you get a leg up,” he says, urging him to not look back and see who he’s climbing over.

To make sure he stays out of trouble, Paul’s parents send him to the Kew-Forest school, famously attended by Donald Trump himself. Trump’s sister, Maryanne Trump, even appears as a guest lecturer in the school (played by Jessica Chastain). She tells the kids that through the school they can get anywhere in life. “It won’t be because of handouts, it will be because you earned your way there,” she says, using racially coded language.

At Kew-Forest, it’s easier for Paul not to stand out, not to speak out. When his fellow students spout out racist sayings, he doesn’t say anything — but his grandfather urges him to do better.  “Next time those schmucks say anything bad about those kids, you’re gonna say something. You’re gonna be a mensch, ok?” he says, using the Yiddish word for a stand up person.  It’s a simple, but powerful, message about allyship.

This movie, which features scenes from a Jewish funeral and a lox and bagel meal, continues Gray’s longtime streak of focusing on Jewish life in New York. In his directorial debut “Little Odessa,” Tim Roth plays a Jewish hitman from Brighton Beach. His 2008 romantic drama, “Two Lovers,” also takes place in the same Jewish neighborhood, and stars frequent collaborator Joaquin Phoenix as a Jewish bachelor, whose parents, played by Isabella Rossellini and Israeli actor Moni Moshonov, try to set him up with a nice Jewish girl.

Phoenix also plays a Jewish pimp in Gray’s 2013 period drama, “The Immigrant.” Phoenix’s character in the movie is based on an actual Jewish criminal named Max Hochstim — who Gray learned about from his grandfather— and the movie is inspired by archival material his brother found about his grandparents. But “Armageddon Time” is the first autobiographical work from the critically beloved director.

“My grandparents used to tell me stories about their trip to Ellis Island from Russia and life on the Lower East Side of New York,” Gray told THR in 2013. And in the first trailer of “Armageddon Time,” we get one of those stories, with Aaron telling his grandson that his mother came to the U.S. “because they wanted her to kill her” in her native Ukraine —
there were soldiers and sometime they’d go out and look for Jews.”

“They hated us then and they hate us now,” he tells Paul, “so we got on a boat and came over here to America, the land of dreams.”

Judging by its trailer, “Armageddon Time” appears to be an incredibly Jewish exploration of what making those dreams come true actually means, who does and doesn’t have access to them and the price we pay for that chase — and it’s an incredibly timely lesson. It premieres October 28 in theaters.