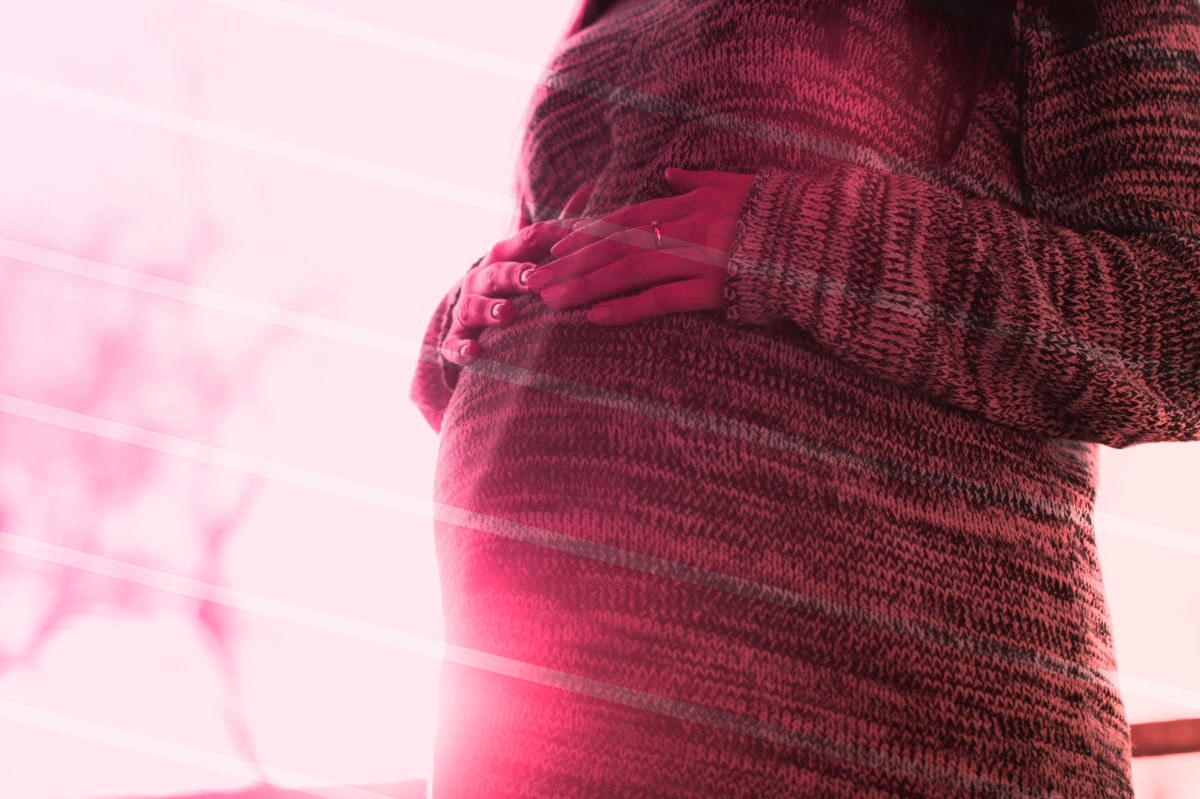 Ashkenazi Jews in the shtetl believed that proud talk when a pregnancy was barely established would invite catastrophe. Like other Jews, they feared the evil eye, expecting it to do harm when their affairs were prospering.

In contrast, Sephardic Jews have often celebrated a first pregnancy. This celebration has been named kortadura de fashadura (in Judeo-Spanish) or tekti’ a el-g’daouere (in Judeo-Arabic), meaning “the cutting of the swaddling clothes.” The ceremonial cutting of a cloth to make the baby’s first costume, which is the same for a girl or a boy, is an old Sephardic custom still continued by some Jews in Istanbul.

When a Jewish woman reaches the fifth month of her first pregnancy, her family invites all her female relatives and in-laws, as well as friends and neighbors. Liqueurs and chocolates, tea, cakes, and sugared almonds are set out on the best china, on hand embroidered tablecloths. The cloth is of excellent quality and traditionally comes from the expectant woman’s dowry. A relative who is herself a mother and whose own parents are still alive (a good omen for long life) receives the honor of making the first cut in the cloth. At the moment of the cut, the pregnant woman throws white sugared almonds on the cloth, to symbolize the sweet and prosperous future she wishes for her child.

Sephardic Jews in Algeria and Morocco celebrated the cutting of the first layette when a woman was in the last trimester of her first pregnancy. The pregnant woman’s parents provided lengths of cloth on a copper tray covered with a silk scarf. In Algeria, the person who made the first cut was similarly a woman whose parents were still alive and who clearly lived in a happy home. In Morocco, the midwife cut the cloth into swaddling clothes in the presence of women friends and relatives who offered their good wishes and shared tea and cakes.

Jewish women in Amadiya, Kurdistan, in the early 20th century, also celebrated a first pregnancy. When a young woman was certain that she had conceived, she went to her father’s house, where her mother and female relatives sewed clothes for the expected baby. They bestowed the honor of making the sheets for the cradle on an old woman who had delivered many babies. The women invited musicians, sang and danced, and offered the mother-to-be tidbits of advice about childbearing. In the evening, they prepared a feast for the men in the husband’s house.

Jews in Yemen and Aden prepared clothes for the newborn in the seventh month of a woman’s pregnancy, but without ceremony. It was customary to conceal pregnancy from the public eye for as long as possible, and each woman sewed what she would need for her own baby.

Unlike the bat mitzvah at puberty and the wedding, which both mark a change in status, no Jewish ritual marks the new role of becoming a mother. Some women have sought to create a new ceremony, in the style of a Jewish ritual, to express their feelings of spirituality and Jewish identity at this milestone in their lives.

For example, one woman chose Rosh Chodesh, the first day of the new moon (a day when women have abstained from heavy work), as a good time for a pregnancy ritual at home. In this ceremony, she recited benedictions over candles and had a challah and sweet wine as well as special blessings for the occasion, just as in other Jewish celebrations. She also incorporated symbolism into the celebration, with motifs of fertility and birth.

For most Jewish women outside the Orthodox tradition, childbearing is no longer a foregone conclusion, but is now a particular stage in life, reached after conscious decision making. In such a ceremony, a woman acknowledges her responsibility for creating a new life, prepares herself to accept her new role, and commits herself to fulfilling it within the framework of Judaism, just as she may have done at her wedding or at her bat mitzvah.