As a Kid, Seth Rogen Watched ‘Sesame Street’ in Hebrew! 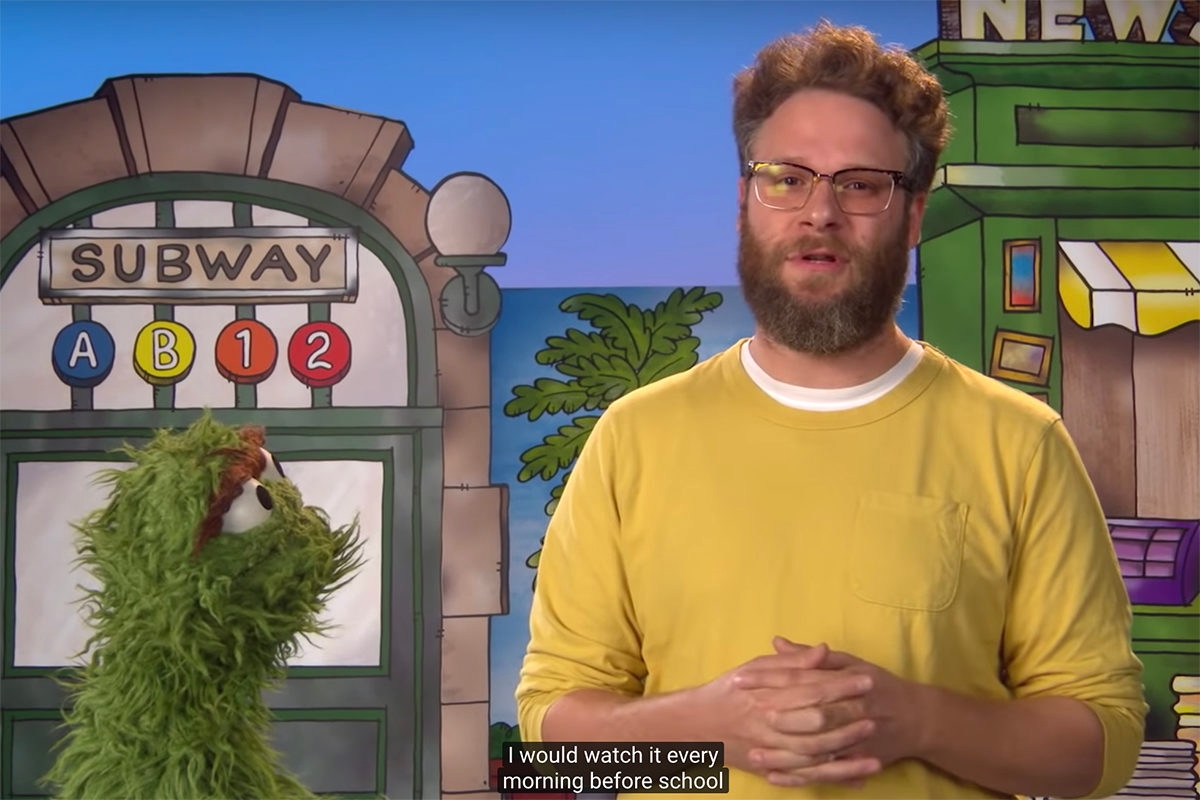 Like so many grumpy, middle-aged people living in New York City, turns out Sesame Street‘s Oscar the Grouch has a cousin in Israel with an eerily similar disposition.

His name is Moishe Oofnik — that’s “oof” as in “ugh,” and “nik” like beatnik or nudnik. And it turns out, Seth Rogen is a fan of the Hebrew-speaking peevish puppet!

In a video celebrating the 50th anniversary of Sesame Street — mazel! — the Jewish actor reminisces with the O.G. Oscar the Grouch about his favorite moments from the show. Rogen recalls how, as a kid, he’d watch Sesame Street in the mornings while eating rice cake sandwiches (apparently, Rogen’s dad is still a fan of those), and how he’d feel validated by Oscar’s disposition, since he was often grumpy, too. (Honestly, Seth? Same!)

Then, in a moment that nearly made this Israeli writer leap with joy, he talks about watching Oscar’s sababa cousin, Moishe Oofnik of Rechov Sumsum, the Israeli version of Sesame Street. (FYI, sumsum means “sesame,” and rechov means “street,” so the name is a literal translation.) Then, the video cuts to a clip in which we see Israeli version of the dumpster grumpster talking to Elmo out of the kind of plastic, green trash can that is instantly familiar to anyone who has ever visited Israel.

Trust me when I say that everything about this video is delightful. Rogen’s Hebrew pronunciation of the show’s name is just so good! Then again, maybe that’s not a surprise: back in 2011, he taught Elmo to say to say todah, the Hebrew word for “thanks” in Shalom Sesame — the American Jewish spinoff of Sesame Street.

But what particularly thrills me about this video is thinking of Rogen watching Rechov Sumsum as a kid — just like I did! I imagine him being captivated by the adorable opening song, which featured footage of children of all ethnicities, running around, jumping, and enjoying themselves all across the Holy Land.

Just like Sesame Street, Rechov Sumsum was a magical place. It had its own unique — albeit slightly less high-production value — puppets, like Kippy Ben Kippod, a giant hedgehog, and, of course, Moishe. In the trademark Sesame fashion, the show’s puppets and characters were diverse. There were Arab characters (the show had a Palestinian version, too, called Shara’a Simsim), a disabled character, and they also showcased a range of Jewish traditions, like this episode about Ashkenazi and Sephardic foods called “Gefilte Fish with Zhug.”

The regular Sesame Street cast also appeared in Rechov Sumsum, in dubbed moments, many of them with Hebraicized names. In fact, the first time I watched Sesame Street in English, I was surprised to find out that the Muppets I knew as Arik and Benz were actually called Bert and Ernie!

Oofnik, voiced by Gilles Ben David, was a particularly great feature on Rechov Sumsum. In one episode, he hitches a ride on a dumpster truck to visit yet another mutual cousin — this one lived in Jerusalem. In another, he gets accidentally drunk on wine during a holiday dinner and becomes suddenly… very affectionate. You don’t have to speak Hebrew to enjoy this one:

Unfortunately, Rechov Sumsum, which started airing in 1983, aired its last episode in 2011. But it still has a fond place in my memory. And, apparently, in Seth Rogen’s, too!