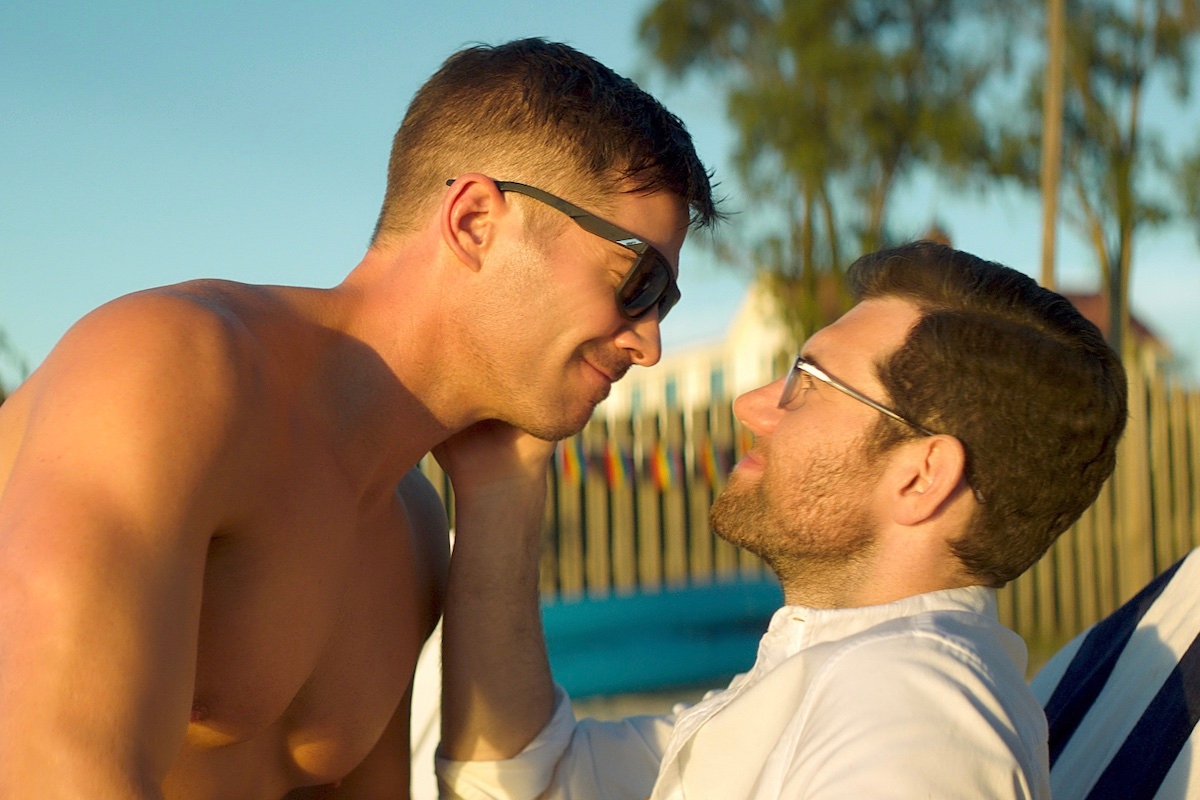 Last Friday marked a Shehechiyanu moment for me. It was my first time going to the movie theater to see a romantic comedy since the pandemic began, and it was oh-so-special, because I saw “Bros.”

“Bros” is a history-making movie. It’s the first big studio queer rom-com to have a large theatrical release — which in the year 2022 (or 5783) kind of boggles the mind. The love story of Bobby Lieber (Billy Eichner), a gay history nerd and academic turned podcast host who gets recruited to open New York’s first LGBTQ museum, and Aaron Shepherd (Luke Macfarlane), a meathead-y attorney — who both don’t do relationships — is an absolute delight.

Aside from being forever part of queer history, “Bros” has also entered the canon of Jewish romcoms. The movie doesn’t harp too loudly about protagonist Bobby Leiber’s Jewish identity, though the moments that it does come through are nuanced and authentic. And there’s even a bit about Barbra Streisand’s “Yentl,” one of the movie’s funniest moments (all movies need more Babs).

Since his excellent “Difficult People” with the fabulous Julie Klausner, Eichner has given us a reason to celebrate kvetchy and “hard to digest” Jewish and queer characters. And Lieber is very much the epitome of that. He rants about straight perceptions of queer people and gay culture. He complains a lot. He’s nebbishy and cerebral. And that’s exactly what Aaron finds irresistible about him. “I like someone who is physically very frail and won’t stop talking,” he tells Bobby, and as we get further into the movie, we see that he really, really means it.

The great rom-coms show us that we’re all worthy of love — something that queer people in this country and around the world certainly deserve more and more of. And the “Bros” protagonists discover that they don’t have to change who they are, what they believe in, or what their deepest desires are, in order to be loved. For Bobby, that means that he doesn’t have to be some masculine ideal of a man; for Aaron, it means getting a bit softer and more vulnerable and real.

The fact that there are three Jewish men behind this movie — aside from Eichner, there’s executive producer Judd Apatow and director Nicholas Stoller — has certainly caught the attention of some top antisemites. Yet we get pretty far into the movie before we conclusively find out that Bobby is Jewish (yes, I know, he’s a podcast host named Bobby Lieber, but plenty of movies have given us similar breadcrumbs without overt Jewishness!).

Bobby volunteers to show Aaron’s family around the city “as a New York Jew” he says. You also see him carrying a gigantic menorah to a holiday celebration and he makes a really infectious joke about the amount of weight training plates at the gym reminding him of a Jewish holiday dinner.

The small Jewish details are delightful and authentic, and they do add another way for yet another minority in this country to feel seen through this already incredibly diverse movie. Guy Branum (who is a sensational Gay Best Friend,) Debra Messing as a hilarious version of herself, Harvey Fierstein, Ben Stiller and Amy Schumer also make some very enjoyable cameos in the film.

In the grand scheme of things, “Bros” tells us that the love stories of queer people can be joyously celebrated without angst (OK, without too much angst). And while it centers cis white gay men, “Bros” also celebrates the diversity of queer culture, with trans, lesbian, bisexual and genderqueer characters, who are all scene stealers.

And while the movie itself is not kid-friendly, it does make the point that it is never too early to start exposing your kids to queer history. The movie features an elementary school class’s field trip to Lieber’s LGBTQ museum. As a mom, this is definitely something I can get behind.

It’s a movie I can’t wait to comfort watch again someday when I’m feeling down and need another reminder to believe in love. Still, I wouldn’t rob yourself of the joy of seeing it in theaters. Stuff your mouth with overpriced popcorn and snort out a Cherry Coke Zero at Eichner’s truly excellent snark.

If I can’t convince, maybe Mandy Patinkin will:

@mandypatinktok Bros! You will love it and laugh! See it this weekend in theaters everywhere! #bros ♬ original sound – Mandy Patinkin and Kathryn G