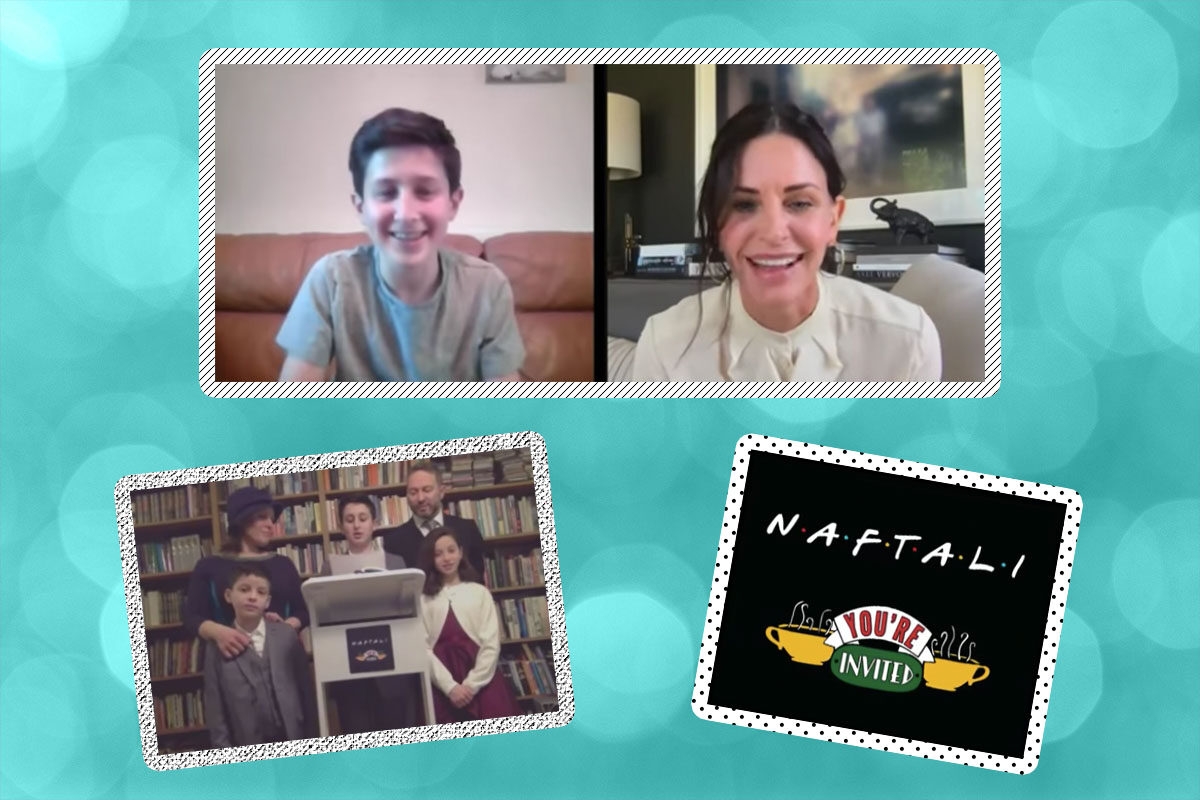 Let’s call it “The One With Monica and the Bar Mitzvah Boy,” and it’s the imaginary Friends episode of our dreams.

When Covid-19 canceled 13-year-old Naftali Arden’s Friends-themed bar mitzvah party in March, the British teen’s family decided the show must go on. They live-streamed his service for friends and family in London, Manchester, Israel, and the U.S., and to everyone’s surprise it drew in thousands of viewers.

Naftali’s virtual bar mitzvah is believed to be the first to come out of the U.K., according to Rabbi Alex Chapter of Borehamwood and Elstree United Synagogue. As such, it garnered a lot of buzz — and even grabbed the attention of The Late Late Show host James Corden.

A Friends super fan himself, Corden invited Naftali on his show to wish him a hearty mazel tov. (No, Corden is not Jewish, but given his recent Hanukkah boyband parody, it might be time to declare him an honorary Jew!)

Did the newly-minted man think his virtual bar mitzvah would be such a smash hit? “No, I had no idea, I thought it was going to be a small thing,” Naftali told Corden.

Given that Naftali was born two years after the Friends finale aired in 2004, Corden was very impressed that a youngster could still relate to the show’s characters — as it happens, Naftali binged the show seven (!) times.

In fact, Corden was so impressed that he invited a special guest to his show who was equally in awe: Courteney Cox!

For superfan Naftali, Cox’s presence would have been a present enough. But there was one more surprise in store: Cox told Naftali that she bought him a foosball table — the same one as seen in Joey and Chandler’s apartment — as a bar mitzvah gift!

The gift is incredibly thoughtful, considering that Naftali’s family rented the very same foosball table for his (canceled) party. Each table was going to be named after a different Friends character, and a red couch a la Central Perk was going to be a prop for photos.

“He really was starstruck, he was so excited about being on The Late Late Show anyway, but when Courteney Cox appeared — it really was a dream come true!” Naftali’s mom told the Jewish Chronicle.

Before Corden gave his final congrats to Naftali, he asked Cox to say one of Monica’s iconic reaction lines.

“Hey, I had to cancel my bar mitzvah and hold it online,” Naftali said, after being coached by Corden.

No one told Naftali life was going to be this way, but in the end, Cox — and Corden! — was totally there for him. Mazel tov to the bar mitzvah boy!