21 Jewish Facts About ‘Friends’ You Should Know 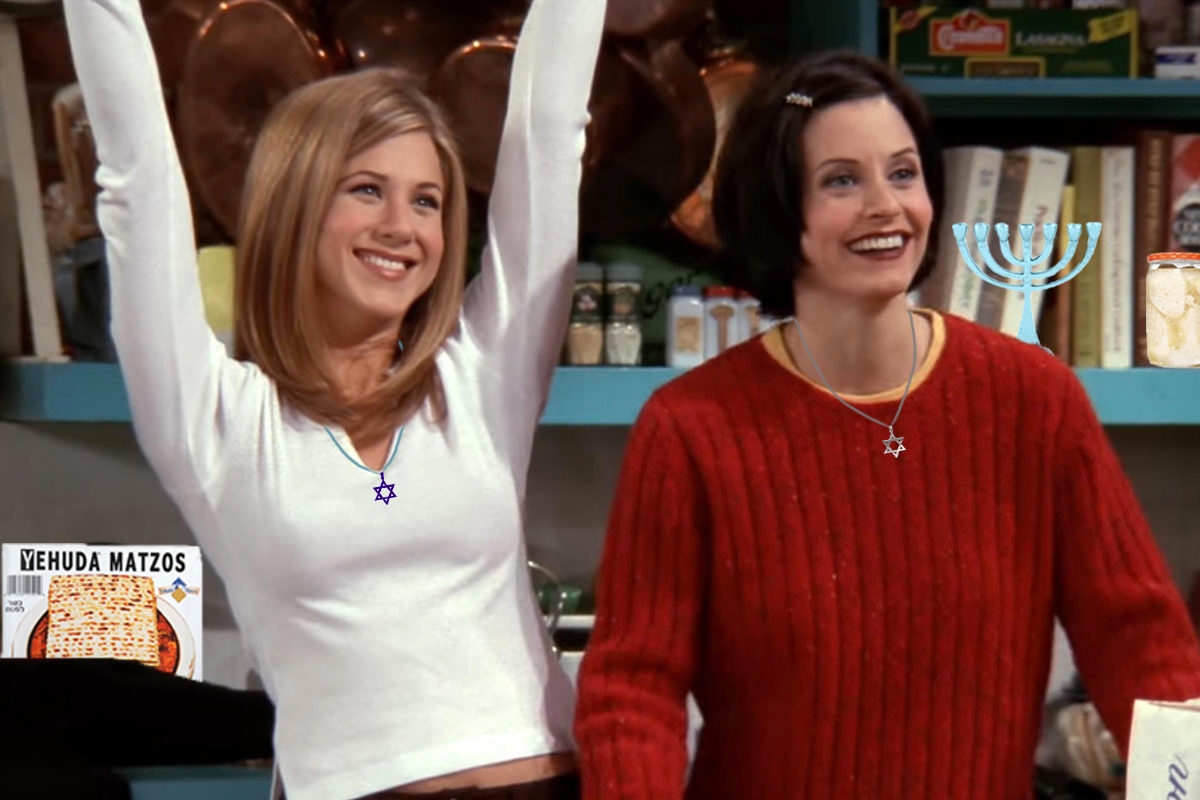 Editor’s note: This piece was originally published on February 26, 2020, when the “Friends” reunion was first announced. It may have not been this highly-anticipated special’s day, or week, or month, or even year, but, after several delays due to the Covid-19 pandemic, “Friends: The Reunion” is finally here! We are republishing this story in honor of this special’s premiere on May 27, 2021, on HBO Max.

Let’s call it “The One Where the Entire Mishpacha Gets Back Together.”

After 15 long years, Friends fans are finally getting the full-cast reunion episode they’ve dreamed of. Last week, the news broke that an “untitled, unscripted” reunion will air in May on the new streaming service HBO Max.

Since the pilot episode’s debut 25(!) years ago on NBC, Friends has cemented itself as one of the most iconic sitcoms of all time. Starring Jewish actors Lisa Kudrow and David Schwimmer — along with, of course, Jennifer Aniston, Courtney Cox, Matthew Perry, and Matt LeBlanc, all of whom were virtually unknown — the series centered on a tight-knit group of 20-somethings in Manhattan. An instant hit, Friends stole the hearts of viewers around the world.

Despite their unrealistically enormous apartments and their absurdly long breakfasts at Central Perk, the sitcom was successful in drawing a fine line between escapist fantasy and reality. And while many sitcoms have achieved a similar level success — Seinfeld, The Big Bang Theory — the characters’ development, and their polarizing personalities (Ross, the pretentious one; Joey, the dumb one; Rachel, the Jewish American Princess; Chandler, the class clown; Phoebe, the eccentric one; and Monica, the type-A) are what resonated with audiences in the long run.

And now, at last, a highly anticipated hour-long reunion episode will be directed by Ben Winston, a British Jew. It will be shot on Stage 24, the very same place all 236 episodes of Friends were filmed throughout its 10-season run.

“Unscripted” is TV industry jargon for documentary or reality TV, and there are scant details about the episode as yet. Who knows what, if any, burning questions will be answered. Will the iconic Rachel Green and long-time beau Ross Geller still be together? What came of Joey Tribbiani’s acting career? Are Monica Geller and her husband Chandler Bing’s kids friends with Emma Geller-Green? Inquiring minds want to know!

While Friends was created by a slew of Jewish creatives, the show itself is shy about leaning into Judaism. A Star of David necklace and Hanukkah mention are sprinkled throughout the seasons, but the sitcom, in spite of having Jewish characters (more on that below!) isn’t known for a deep or accurate portrayal of modern Judaism.

Despite its ambiguity, we dug up a host of Jewish facts about the series. Given all the hours we’ve all spent, collectively, watching Friends, gathering these Jewish tidbits together felt like the least we could do. Here we go:

1. Let’s start with the Jewish creators, shall we? Executive producer Marta Fran Kauffman, who has three children with her ex-Michael Skloff, was raised in a Conservative Jewish household in the Philadelphia suburbs. She went to Jewish summer camp, visited Israel, and kept kosher growing up.

In a 2011 interview, Kauffman told the Jewish Telegraph that her mother, Dorothy-Rose, never told her how proud she was of her accomplishments. “But I did find a scrapbook she kept that had clippings from every article that had ever been done on me.” Awww. Words of affirmation are presumably not her love language.

2. Kauffman’s co-creator and real-life friend from their days at Brandeis University, David Crane, was also raised in a Jewish household.

3. Kauffman’s ex, Michael Skloff, played a role too: Before they separated, the Jewish musician composed the music for the iconic Friends theme song.

4. As for the theme song’s lyrics? Those were written by Jewish lyricist Alta Sherral Willis, who described “I’ll Be There For You” as the “whitest song I ever wrote.” The songwriter, artist, and art director (a multi-faceted woman!) is best known for the Earth, Wind & Fire hits “September” and “Boogie Wonderland.” (Sadly, Willis died in December 2019 at age 72.)

5. While fictional characters Ross Geller and his sister Monica are Jewish, as is Rachel Green, Kauffman and Crane didn’t write the characters as strongly affiliated with their religious identities. Given that so many cast and crew members were Jewish, the observation is a curious one.

“When we were creating the show, we were not thinking about Jewish characters,” Crane told JWeekly. “In the initial character breakdowns, we never mentioned religion. We wanted funny, caring, and real characters with stories you invest in. But a lot of it has to do with the actors you cast.”

6. Despite not “thinking about Jewish characters,” Crane also said that in the writers’ room, which was about half Jewish, people told stories from their lives, which is how Ross’ Jewish background came about. “Ross emerged out of a room where a lot of people had a Jewish background,” Crane said. “So his Jewish plotline was probably informed by that.”

7. Speaking of Ross, the neurotic paleontologist people hate to love and love to hate, let’s talk about the Jewish actor who portrays him: David Schwimmer. The Jewish dad initially rejected the role of Ross because he wanted more theatre experience, but eventually became the first actor to be cast. Schwimmer’s acting debut was when he starred as the fairy godmother in a Jewish version of Cinderella at age 10. Adorably, his older sister’s name is Ellie.

8. Okay, back to Ross Geller, the most explicitly Jewish character on Friends. Father to Ben Geller (portrayed by twins Dylan and Cole Sprouse) from his first marriage, and Emma Geller-Green, whom he co-parents with the girl-next-door Rachel Green, Ross maintained his Jewish identity throughout Friends. In season three, Ross accidentally breaks a young girl’s leg after hitting her with a tennis racket. To make up for it, he sells Brown Bird cookies for her, including Hanukkah Menoreos.

9. Hanukkah makes a second appearance In the seventh season. Ross intends to surprise his son Ben by dressing up as Santa Claus for Christmas, but without any costumes available he resorted to inventing Santa’s Tex-Mex friend: the Holiday Armadillo. Through the now iconic costume, Ross tells the story of Hanukkah, and the episode ends with a candle lighting ceremony. Fun!

10. The following season gave us a bigger glimpse into the Gellers’ Jewish lives. While thwarting her brother’s plan to perform bagpipes at her wedding to Chandler, Monica reveals that Ross performed a terrible rap at her bat mitzvah. It’s the thought that counts, right? (Well, to Monica, it didn’t.)

11. As for Monica’s Jewishness, we already know she had a bat mitzvah, but as the series progressed her Judaism became less overt. In one season she decorates a Christmas tree, and in season seven she searches for a Christian minister to officiate her wedding to Chandler. (I guess Ross wasn’t available to take the mic?)

12. In a peculiar episode where Ross gets a big ol’ crush on his cousin, Monica and Joey discuss circumcision. You see, a casting director explained to Joey that the role he was trying out for required the actor to be “authentically, anatomically not Jewish.” Confused, the director tried to explain: “an Italian Catholic immigrant at this time would not be…” to which Joey replied, “bar mitzvahed?”

13. Here’s another Hanukkah reference: In Phoebe’s iconic Christmas song, she includes a lyric for Monica: Monica, Monica, have a happy Hanukkah.

14. Our last Jewish character is Rachel Green, portrayed by America’s sweetheart, Jennifer Aniston. In the pilot episode, Rachel joins the Central Perk gang after fleeing her wedding to Barry Farber, a doctor. Rachel is the only Jewish character whose parents are both Jewish, but aside from a Magen David necklace that makes a cameo in Season 3 and referring to her grandmother as her bubbe, the Jewish mom’s (remember she had a daughter, Emma, with Ross?) cultural identity comes mainly from her portrayal as a quintessential Jewish American Princess.

Rachel Green’s Jewishness was highly contested, however, because her religion was never confirmed until 2011.  “In our minds I guess she was Jewish,” Crane said. “You can’t create a character with the name ‘Rachel Green’ and not from the get-go make some character choices.”

16. Chandler has a thing for Jewish girls, it seems. Before getting together with Monica, he went on a date with Aurora, a polyamorous former member of the IDF.

17. One of Chandler’s most famous on-again off-again relationships was with Janice Hosenstein Litman Goralnik, the loud, curly-haired stereotypically Jewish woman known for her loud catchphrase, “OH MY GAWD.” Raised in a secular Jewish household in Manhattan, Chandler’s annoying nasal ex was portrayed by Maggie Wheeler, who was raised in a secular Jewish home and now directs the Golden Bridge Community Choir in Los Angeles.

18. The eclectic Phoebe Buffet was portrayed by Jewish mom and actress Lisa Kudrow. Raised in a Jewish household in Los Angeles, Kudrow’s grandparents were Holocaust survivors and she had a bat mitzvah. Married to French advertising executive Michael Stern, Kudrow’s pregnancy with her son, Julian Murray Stern, was written into the fourth season of Friends, when her character became a surrogate mother for her younger brother and carried his triplets.

19. After the series finale, Kauffman shared that her rabbi once stopped her in a parking lot to demand what became of Rachel and Ross’ relationship. Spoiler alert: Both Kauffman and Aniston think the couple — as well as their daughter, Emma — would all be in therapy. Very Jewish, if you ask us!

20. Friends welcomed a host of Jewish celebrity guest stars over its 10 seasons, including Paul Rudd as Phoebe’s boyfriend and husband; Hank Azaria as a Ladino-speaking Sephardic Jew who played Phoebe’s other boyfriend, David the scientist; Selma Blair as Chandler’s seductive co-worker; and Winona Ryder.

21. Who played Ross and Monica’s Jewish father, Jack Geller? None other than Elliot Gould, who shares a son with his former wife, Barbra Streisand.