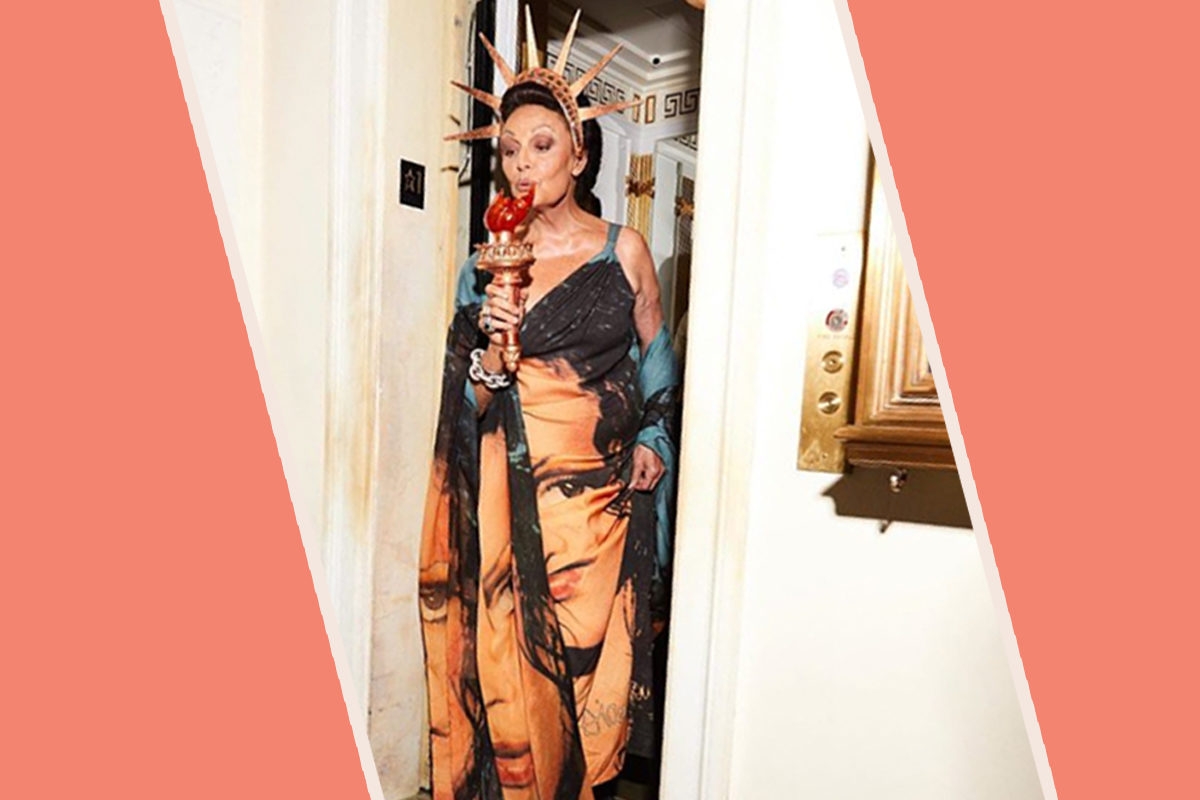 “Today, May 6, 1944, my mother was arrested and sent to Auschwitz,” she wrote on Instagram. “75 years later, I am going to the Met Ball as her torch of Freedom!”

Incredible. But that’s not all: In another interview, the inventor of the wrap dress explained that the Statue of Liberty is “very near and dear to my heart as an immigrant in this country.”

Diane von Furstenberg was born Diane Simone Michelle Halfin in Brussels, Belgium. Her mom, Lilian Nahmias, was born in Thessaloniki, Greece (there was a large Jewish community there before World War II). She survived imprisonment at Auschwitz concentration camp.

“My mother Lily Nahmias was 20 and engaged to my father when… the SS arrested her for working in the Belgian Resistance. Her job was to go around Brussels on her bicycle to deliver documents and fake papers to those who needed them. She was thrown into a crowded truck, which took her to a prison in Malines, Flanders. She told her interrogator she was Jewish and was sent to Auschwitz, where she was given prisoner number 5199,” Diane wrote in a powerful essay. “She was one of 1,244 survivors from 25,631 Belgian Jews sent to the camps. Her will and spirit to live were her defiance of the evil she had endured.”

18 months after she was freed, Diane was born.

“She made me so strong,” von Furstenberg told W Magazine about her mom, who died in 2000 at age 78. “She never allowed me to be afraid. If I was afraid of the dark, she would put me in a dark closet to teach me to be unafraid.”

We love how she honored her Holocaust survivor mom with this “liberty” inspired look. For the designer, this year’s Met Gala was a family affair — by her side was her granddaughter, Talita, who is a sophomore at Georgetown University.

Talita “is young and fun and reminds me how much fun these events can be,” Diane told Coveteur. “She’s like a breath of fresh air, and especially as she comes off of designing her first collection, I think nights like this are really meaningful to her.”

and the journey goes on ….

And, as you may imagine, Talita loved hitting the town with her glamorous grandma. “Going anywhere with my grandmother is fun because she knows everyone and introduces me to so many interesting people,” she told Coveteur. “And she feels so young to me, she doesn’t feel like a grandma at all.”

it’s not a #metgala without a bathroom selfie ✨

The theme of this year’s star-studded bash was “Notes on ‘Camp,'” based upon Jewish intellectual Susan Sontag‘s 1964 essay of the same name. The evening saw some wild outfits on the pink carpet — celebrities went all out with feathers, headpieces, sequins, and more. But the highlight of our evening? Diane von Furstenberg, for sure.

Jewish mamas SLAYED on the #MetGala pink carpet last night. (The theme was #NotesonCamp, based on an essay by #SusanSontag!!) Who was your favorite?? Let us know 👇

Image of Diane in header via @DVF on Twitter.