Did Marianne Williamson Traumatize This 10-Year-Old Jewish Kid for Life? 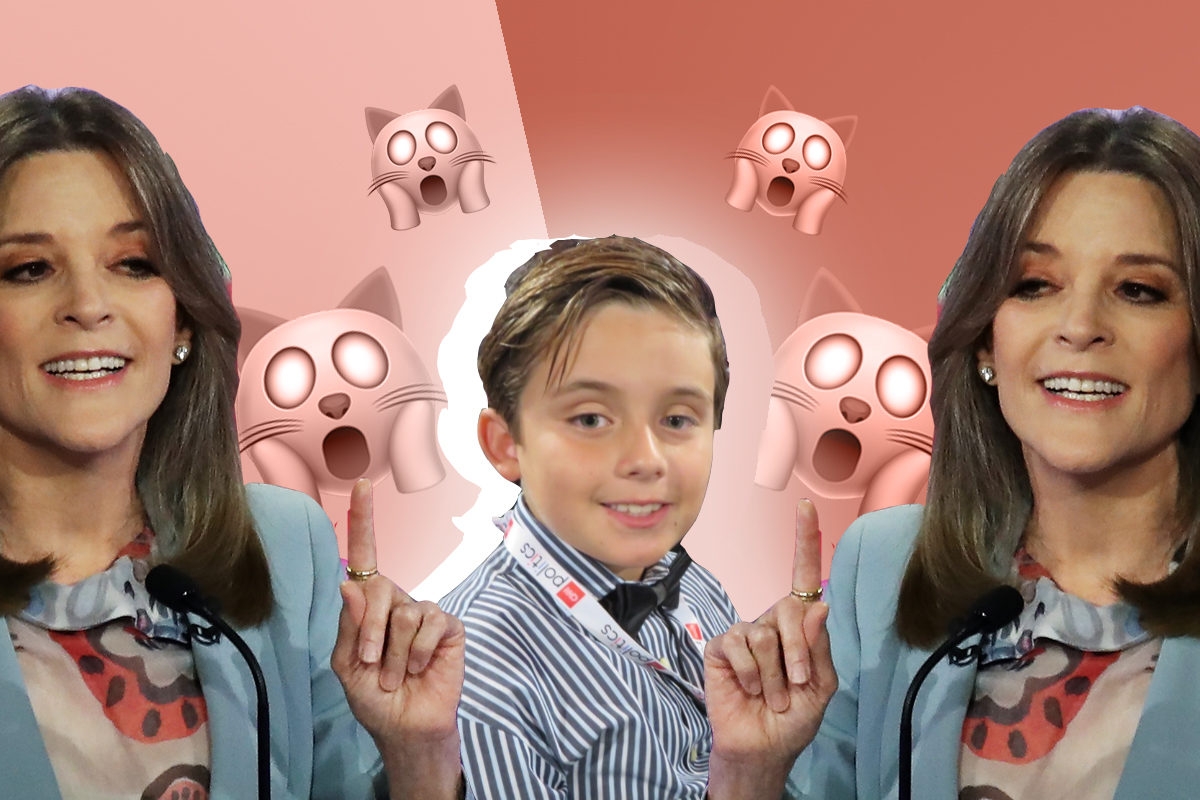 The Jewish mom (really!) had a lot to say during the debate on Tuesday evening.  At one point, the self-help guru invoked “dark psychic forces,” and she also fell back upon the Yiddishy Seinfeldism, “yada, yada, yada,” in a monologue about gun violence.

But perhaps her most notable moment last night was not during the debate itself, but in an adjacent interaction with young reporter Jefferson Henry Kraft. Kraft — who goes by Jeffrey — is a 10-year-old Jewish boy from Culver City, Calif., who is covering the debates for KidScoop Media.

Williamson was giving soundbites to the assembled media in Detroit when she ran into Kraft, who we’re wagering was the the youngest and sweetest correspondent in the room. Kraft just recently made the move from restaurant critic — “if Darth Vader had a meal at Pasta Sisters he would have been just a bit nicer,” he once wrote — to debate correspondent, motivated by his passion for animals and the environment.

In a video currently making the rounds, we see Williamson sweetly greeting Kraft with a boisterous “hi!” and a reminder that the two had met earlier. Then, Kraft sweetly — almost shyly — asks the candidate if she has any pets.

Next, we see Williamson lean down to his level and solemnly say, “I had a cat, and the cat died.”

What the what?? This feels like the political equivalent of bumping the turntable at a party — well, back when parties had turntables, anyway. Watch the entire exchange below:

Oh, geez! We hope young Kraft wasn’t too traumatized by this exchange! (I mean, clearly he’s seen Star Wars, so maybe this is all NBD?) We don’t know who to be more heartbroken for, Williamson for her dead cat, or animal-loving Kraft, who, during his debut as a political correspondent, had to be confronted with super sad thoughts about dead cats. EEK!

Williamson, who some call the meme queen, was popular on Twitter last night, especially for invoking the Seinfeldian “yada, yada” when talking about the Democratic approach to the gun debate.

The responses from the Twittersphere were pretty funny:

Jerry: Did she just yada yada an answer on guns?

Marianne Williamson is the only candidate brave enough to just cut the middle of her speech and yell "YADDA, YADDA, YADDA" at the top of her lungs and for that I respect her

But, hey, reader, let’s huddle up for a second: This may be “fun” or “cute,” but we need to keep in mind that we live in a post-2016 reality. Remember when everyone said Trump could never be elected? Well, here we are, almost three years into his presidency. Everything is possible, including a Marianne Williamson presidency, so we need to take her seriously.

Let’s focus on the fact that Williamson has some very dangerous ideas about mental health and illness in general. And while Williamson claims she’s not an anti-vaxxer, she does use common dog whistles against the pharmaceutical industry, the CDC, and the FDA that help fuel the beliefs of vaccine skeptics.

These are some of the things Marianne Williamson has tweeted about mental health and antidepressants. She is hideously dangerous. pic.twitter.com/kCwiw3ujxt

Marianne Williamson is a charlatan and a fraud.

AIDS is not caused by psychic screams. pic.twitter.com/plorOdatnw

Marianne Williamson is not remotely qualified to be president. She has spread a large number of unhinged — and dangerous — ideas. And the sooner she is off the debate stage, the better it is for the Democratic Party and the country.

It’s all fun and games until the very under-qualified big personality with dangerous ideas wins the nomination. So, while its OK to enjoy the odd fabulousness that is Williamson’s candidacy, we all need to do our very best not to make it a viable reality.