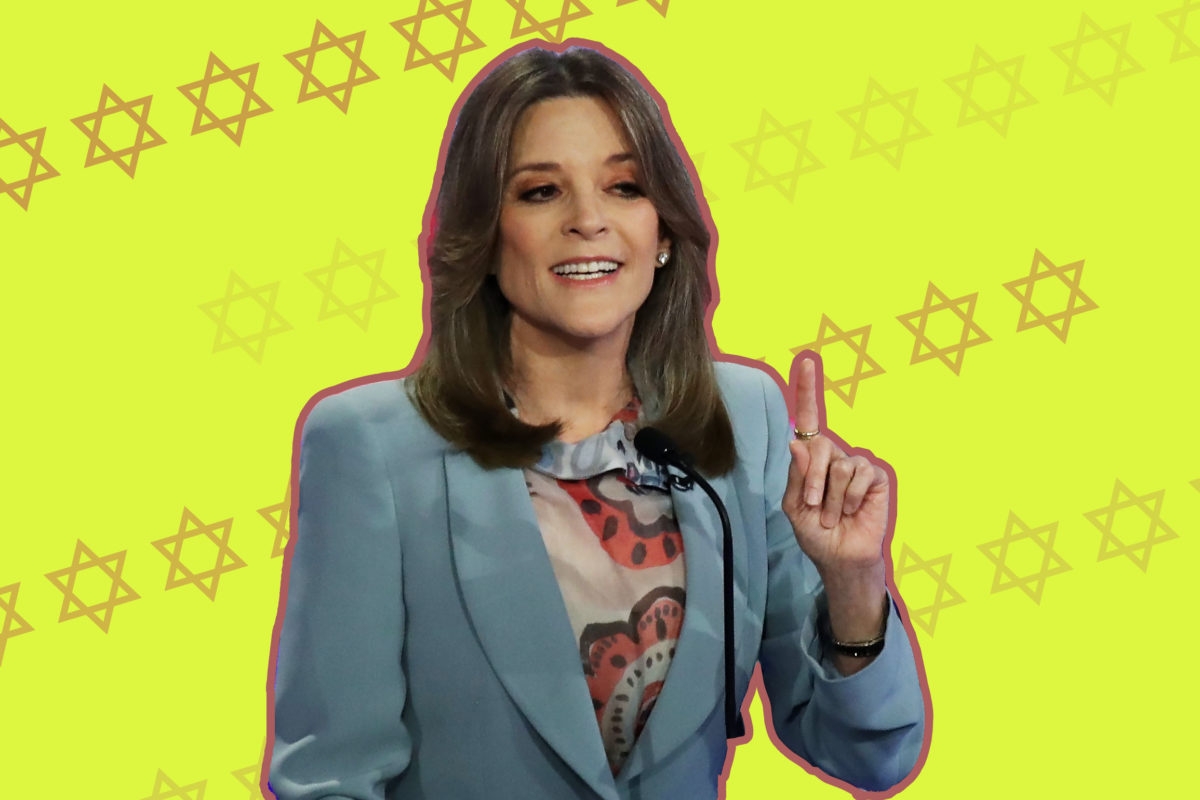 If you’ve watched the Democratic primary debate last night, you may still be picking up your jaw from the ground after watching the performance of new-age guru and presidential candidate Marianne Williamson.

Equal parts captivating, puzzling, and inspiring, Williamson was truly something else. Like when she said her first call as president would be to the prime minister of New Zealand. “I will tell her ‘Girlfriend, you are so on,’ because the United States of America is going to be the best place in the world for a child to grow up,” she told the crowd.

Williamson is many things, including an author of 14 books — four of which were bestsellers. She was also once actress Laura Dern’s roommate. But did you also know she’s a Jewish mom?

That’s right, Williamson was born to Jewish parents in Houston, and her family were members of a Conservative synagogue, Congregation Beth Yeshurun, which was deeply impacted by Hurricane Harvey. While her family wasn’t observant, Williamson told our sister site, JTA, that she spent every night saying the shema and talking to God. So you could definitely say that Williamson, a spiritual teacher to the stars (she counts Oprah as one of her disciples!), had humble Jewish beginnings!

Williamson has one daughter, India Emma, who was born in 1990, when Williamson was 38. She even wrote a book called Emma and Mommy Talk to God about her daughter (and, um, presumably herself and God, too). Williamson also told JTA that, these days, her daughter is way more observant than she is, saying the 28-year-old, who lives in London, “is very involved in her synagogue.”

Before Thursday night’s debate, many people didn’t really know about Williamson, and didn’t know she was running for president. But after her wacky performance, Twitter went crazy for the Jewish mom:

And while we do admit Williamson is pretty out there, there’s actually a lot about her we can applaud. In 1989, for example, she started Angel Food, which helped feed severely sick people in Los Angeles. And, according to JTA, “in 2004 she co-founded The Peace Alliance, a grassroots educational endeavor that teaches peace- building skills.”

She started her political career by running for congress (California’s 33rd Congressional District) in 2014. And while she lost, she did have a campaign song sung by Alanis Morissette! We should all be so lucky!

While there’s so much that’s inspiring about her, there’s also no denying that she can also be a bit problematic — especially when it comes to healthcare issues. She once tweeted that swine flu can be healed by pouring “God’s love on our immune systems.”

I found it. The most bullshit in one tweet, medical edition. https://t.co/JCCJZVqafX

Her rhetoric around vaccines is particularly dangerous. While the hosts of The View were able to make her state that she supports vaccines, she nonetheless espouses the idea that big pharma, the CDC, and the FDA are in cahoots, and don’t necessarily have public health in their best interests. She’s also said there’s propaganda “on both sides” (oof) of the vaccine debate, which is patently false, as vaccines save lives.

So while we can’t really condone a vaccine “skeptic” for president, we can definitely agree that Williamson is obviously smart and has some pretty good ideas. And, yes, also some pretty enjoyable new age-y advice.

It’s very unlikely that Williamson will be the Democrats’ 2020 nominee — and that’s probably a good thing. But we certainly don’t want her to disappear! Maybe she can use her Katherine Hepburn-y voice to narrate the 2020 election — we’d definitely tune into that.

Whatever happens, Marianne Williamson should host an official White House ASMR podcast that approximates what it'd be like if Katherine Hepburn got really into crystals